Is parabiosis the new fountain of youth? Parabiosis, meaning “living beside,” is a 150-year-old surgical technique that unites the blood vessels of two living animals. One of the earliest accounts of parabiosis comes from the mid-1800s when a French zoologist, Paul Bert, attached the circulatory systems of two animals and demonstrated that fluid injected into a vein of one animal could pass through a vein of the other animal. In 1924, the physician Alexander Bogdanov experimented on parabiosis as a means of extending the lifespan. However, those experiments led to an untimely end when Bogdanov injected himself with blood from a student who had both malaria and tuberculosis; he subsequently died. In the 1950s and 1960s, parabiosis research was briefly revived, as scientists used rats to show the beneficial effects  of this surgical technique on both longevity and improvement in tissue function. However, some experiments also unmasked the potential negative effects of parabiosis, namely, rejection of the donor animal’s blood, cancer or even death. This significantly impacted interest in this method.

More recently, there has been a renewed interest in this procedure. In 2014, neuroscientist Tony Wyss-Coray reported that injecting only the plasma, as opposed to whole blood, from young mice into older mice could mimic the effects of parabiosis. Similarly, a recent paper published in the journal Nature by Wyss-Coray’s lab, explored the effects of injecting human umbilical cord plasma on memory and learning in old mice, with interesting results.

His team selected mice of different ages, from 3.5 months old (about 25 in human years) to 14 months (about 60 in human years), and injected them with human cord plasma (the straw-colored liquid portion of blood derived from the umbilical cord) every four days. After two weeks, they checked the animals’ hippocampi, the part of the brain responsible for the creation and storage of memories. There was no effect on the hippocampus of young mice. However, in old mice, human cord blood activated the hippocampal neurons. To test whether this change in activity corresponded to actual memory-related behavior changes, the scientists subjected the mice to a common memory test — navigating a maze. The old mice treated with cord blood were able to navigate the maze much faster than the control mice not been treated with cord blood. 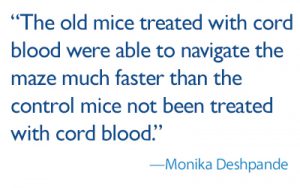 Next the team identified TIMP2 (tissue metallopeptidase inhibitor 2) as the specific protein found in cord plasma responsible for this effect. They showed that old mice treated with purified TIMP2 demonstrated the same benefits as those treated with cord plasma. Furthermore, old mice treated with plasma that had TIMP2 specifically depleted did now show any improvements in memory or hippocampal function. Stanford University, home to Wyss-Coray’s lab, has filed for a patent using TIMP2 as a treatment for age-related conditions, and Alkahest, a company cofounded by Wyss-Coray, will develop the therapeutics.

This research comes at a time when Hollywood is obsessed with longevity. A recent episode of the TV show Silicon Valley titled “Blood Boy” explored this issue, in which a rich tech mogul hires a young person whose blood is transfused into his body as an attempt to restore youthfulness. This was perceived as an allusion to the noted Silicon Valley venture capitalist Peter Thiel, who is notoriously obsessed with immortality. In October 2016, Thiel helped fund a Silicon Valley startup called Ambrosia, a biotech company that harvests donor plasma from young people under the age of 25 and injects it into older adults for a fee of $8,000.

Given these recent advances, it appears that parabiosis research may be set to move forward. We might be closer to a day when the science behind “Blood Boy” becomes more accessible to middle-class America and is no longer restricted to rich Silicon Valley venture capitalists.