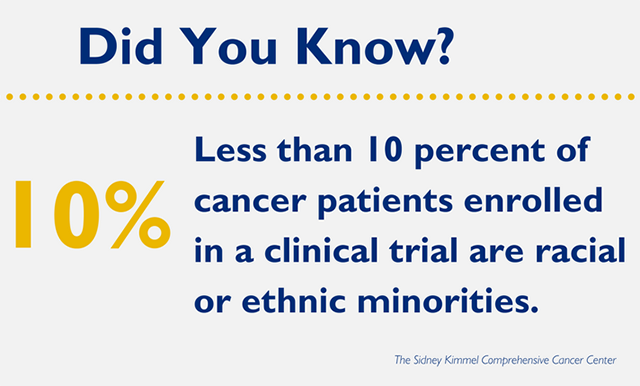 When scientists and clinicians hear the words “clinical trial”, we may think of hope, discovery, and a new chance at life. But for racial and ethnic minorities, these words may not have the same positive connotation but may rather be associated with inaccessibility, fear, and exclusion. The potential benefits for patients who participate in clinical trials are numerous, including free or reduced drug costs, access to new treatments that are otherwise not available, and an overall better standard of care. However, many patients from minority populations do not have access to these benefits, as was recently highlighted in a multi-institutional study led at Johns Hopkins by Jennifer Wenzel, Ph.D., studying increased minority involvement in clinical trials by bolstering clinical and research professional training.

Overall, enrollment in clinical trials is minuscule, with less than 5 percent of all cancer patients currently enrolled in a clinical trial. While this small number is an issue in and of itself, a further problem is that of enrolled patients, less than 10 percent are racial and ethnic minorities, and African Americans are only 60 percent as likely as whites to enroll in clinical trials. These numbers are especially concerning given that cancer mortality is higher in the majority of tumor types and stages for African American patients than for non-Hispanic whites, and African Americans are more likely to have advanced disease at diagnosis.

While the National Institutes of Health (NIH) Revitalization Act in 1993 requires that medical research paid for by the NIH include women and minorities, it does not provide adequate instruction on minority enrollment. Furthermore, as only approximately 6 percent of United States, clinical trials are funded by the NIH, the majority of trials do not abide by this requirement.

The issue of minority enrollment and retention in clinical trials is multifaceted, with the mindset of both patients and clinicians/scientists playing a role. Minority patients may have less access to clinical trials, as minorities are more likely to rely on under-resourced hospitals for care. As most clinical trials are conducted in large urban areas, fewer individuals from rural areas are included.

Additional financial barriers also exist, including transportation and/or lodging costs, and limited sick leave. There is also a level of general mistrust towards research professionals and clinical trials after several historical cases in which minority research subjects’ rights were violated, including the Tuskegee study. Lastly, minority populations have a higher likelihood of being diagnosed with other chronic diseases (including obesity, diabetes, or asthma) that traditionally have excluded them from participating in clinical trials.

Besides these socioeconomic and geographical factors, Dr. Wenzel calls on research professionals and clinicians to play a role in enrollment disparities as well. Finding minority patients often takes longer and requires more effort. Without the mandate to do so, many researchers choose not to spend extra time and resources on recruiting minority populations. Dr. Wenzel’s findings show that research staff, principal investigators, and primary care physicians hesitate to include minority patients in their research because they view it as a burden on individuals who may be overwhelmed by other aspects of their lives.

There is much that can be done to address this complex issue. As the Eliminating Disparities in Clinical Trials (EDICT) report by the Intercultural Cancer Council stated, researchers must focus on the “three Rs” — recruitment, retention, and return. Researchers must not only actively recruit minority populations, but must also work to retain patients by overcoming any transportation barriers, insurance issues, and/or language barriers. The American Society of Clinical Oncology (ASCO) has encouraged researchers and clinicians to expand eligibility criteria such that more patients are eligible for trials, potentially allowing more minorities with existing comorbidities to participate.

At Johns Hopkins, a NIH-supported partnership between the Johns Hopkins Kimmel Cancer Center and the Howard University Cancer Center started in 2001, was established to focus on research, outreach, education, and training on cancer health disparities associated with minority populations and cancer treatment. Hopkins is also working to address these disparities through Dr. Wenzel’s work with the multi-institutional EMPACT (“Enhancing Minority Participation in Clinical Trials”) program which specifically focuses on the problem of minority recruitment training for research professionals.

Through this study, Dr. Wenzel has learned that many researchers are not adequately trained but notes that better training can bridge gaps between professionals and patients, providing many benefits. She states that a great support system comes from “patient navigators”, who work with patients to provide information on available clinical trials, resources to solve logistical barriers, and emotional support and recognition of specific minority needs.

Moving forward as an institution, as well as the next generation of clinicians and scientists, we must acknowledge the large disparity that exists in clinical trial enrollment with minority populations. We must take steps to enroll more minority patients in clinical trials, so that they may reap the benefits of having access to life-saving therapeutics, while in turn benefiting the studies by giving more generalizability of the study for more patients.