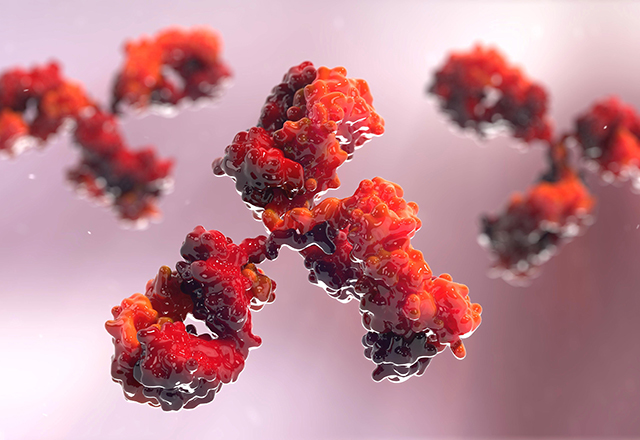 The human immune system is composed of a diverse array of cells, which collectively work to exterminate pathogenic entities in the body. Yet this system is able to recognize host, or self, tissues as “friendly” through a variety of so-called immune checkpoint signals. Many cancer types — including melanomas and breast cancers — exploit this system by overexpressing two such immune checkpoints called programmed death-ligand 1 (PD-L1) and transforming growth factor beta (TGF) [1,2]. The PD-L1 signal is presented on the surface of tumor cells and disables attacking immune cells when the two make physical contact with each other. This signal acts like a molecular cloaking device, allowing the pathogenic tissue to pose as healthy in the eyes of the immune system. Alternatively, the TGF signal is secreted by tumor cells into the immediate environment and activates regulatory T cells (Treg), a cell type that disables immune assault within close proximity of the tumor. As such, cancer types that overexpress PD-L1 and TGF are able to evade immune surveillance, a phenomenon that ultimately accelerates tumor progression. 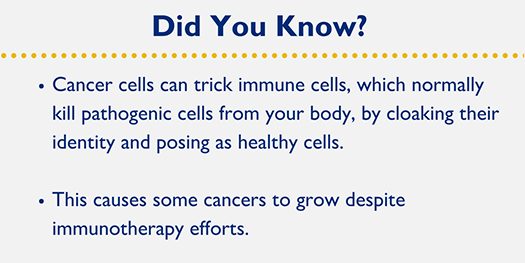 There are currently three FDA-approved drugs that block the PD-L1 signal, and by doing so, direct immune cells to kill tumor cells in the event of a physical encounter. While these therapies have been met with clinical success in patients with different cancer types, the strategy has its limitations. It requires immune cells to push through an inhibitory layer of Tregs — presumably stimulated by TGF —in the cancer microenvironment before physically meeting the tumor cells. Consequently, Tregs have garnered attention in the cancer immunotherapy research community as a potential means of resistance against therapies such as PD-L1 inhibitors.

An antibody molecule is shaped like a Y with two arms that can be fused to other molecules that can act to “trap” surrounding proteins.

This concern sparked a collaboration among researchers from the Johns Hopkins University School of Medicine, Insilico Medicine, Inc. and Stanford University. Their efforts ultimately resulted in the development of a dual-function construct called a Y-trap, which disables both the PD-L1 and the TGF immunosuppressive mechanisms [3]. The Y-trap consists of an inhibitory anti-PD-L1 antibody fused to a TGF-binding domain, which serves as the “trap” portion of the construct. By trapping TGF and blocking its effect, the authors hypothesized that their Y-trap construct would clear Tregs from the cancer microenvironment, thereby removing a major impediment for antitumor immune attack. This clearing effect on Tregs was observed in mouse models of melanoma and breast cancer when treated with PDL1-TGF Y-traps. Furthermore, the dual-function Y-traps were shown to be significantly more effective than single-function PD-L1 inhibitors at slowing tumor progression in both melanoma and breast cancer models.

While this therapeutic approach shows promise in treating tumors that don’t respond to regimens of traditional PD-L1 inhibitor treatments, its risk for inducing autoimmunity should be acknowledged as Y-traps advance to clinical trials. Dosing of Y-traps should be meticulously studied in an attempt to determine its therapeutic window, the dose range in which intended antitumor effects are seen with minimal adverse effects. At any rate, Y-traps serve as a remarkable leap forward in the effort to improve outcomes for patients with advanced forms of metastatic cancer.