Glioblastoma research is similar to superhero film plots. How, you may ask? If each superhero represents a different treatment drug, then we as researchers want to cause destruction of the cancer cells with the least number of superheroes possible. This is because we wouldn’t want patients to need to take a large cocktail of treatments that leave them feeling sicker than with the disease alone. If a smaller number of superheroes (or, drugs) can do the job, that is ideal. Therefore, we must find just the right two or three treatment drugs that work together to lead to the most therapeutic effects. A recent collaborative study, including the laboratory of Gregory Riggins, M.D., Ph.D., found a possible new two-drug combination using temozolomide and procaspase activating compound-1 (PAC-1). Can just two superheroes do the trick?

Glioblastoma is the most common of all malignant central nervous system tumors. Typically, patients live for an average of 14.6 months with the current standard of care treatment, which is temozolomide (a chemotherapeutic drug) and radiation.1 Few patients (5.5 percent) live for five years after their diagnosis.2 Therefore, improving survival rates is crucial, and complete eradication of the cancer remains the ultimate goal. 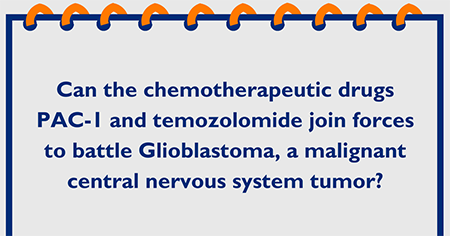 Temozolomide is not really new to the scene. It’s actually the go-to drug in glioblastoma research. Therefore, we could say that the superhero that most closely matches temozolomide is the strong and sturdy Incredible Hulk.

How does temozolomide work? Much like the Hulk, temozolomide alters the DNA within cancer cells to make them “smash” themselves, which leads to cell death.3 However, cancer is a clever disease because cells can become resistant to temozolomide. Therefore, we need another drug to join forces with temozolomide.

Here comes PAC-1, a newcomer on the superhero scene, to help out. PAC-1 acts like a detonator switch inside the cancer cells. Recent research has found a reservoir of inactive proteins that can cause a signaling cascade event to lead to cell death within the cancer cells.4 Inactive proteins need something to trigger them to become active, which is right where PAC-1 fits into the picture. The activated proteins (i.e., caspases) cause cell death and decrease cell growth.4 The success of this process has been seen in colon cancer cell lines.5 Other laboratories have evaluated PAC-1’s ability to induce cell death in human breast, liver and gallbladder cancer tissue samples with success.6 Thus, PAC-1 is a promising drug that can be applicable to many different cancer types.

Before PAC-1 and temozolomide can be used in humans, they need to provide further evidence that they are cut out for the job of battling brain cancer.  Superhero films always begin with a battle between the heroes to see if they can work well together-which doesn’t always happen (e.g., Batman and Superman, Iron Man and Captain America). Researchers need to ensure that the two drugs will be a better treatment regimen together than alone.

In this current study, the researchers validated high levels of inactive caspases within a large glioblastoma patient database. This provided evidence that PAC-1 will have a target to detonate within this specific brain cancer. Next, PAC-1’s ability to activate cell death was tested in glioma cells (brain cancer cells) outside of an animal. Treatment with PAC-1 alone caused cell death in glioma cells. These experiments validated that PAC-1 has a place as a possible hero to combat brain cancer.

Finally, PAC-1 and temozolomide were used to treat mice that had patient-derived glioblastoma. The mice with the combined treatment lived longer than mice that received no treatment. The study was progressed beyond rodents to try the combination treatment in larger mammals: dogs with spontaneous brain cancer. Three dogs were treated similarly to human patients, with temozolomide, radiation and PAC-1. The three drug treatment was well tolerated by the dogs and all their tumors reduced in size. There was even a complete remission in one dog!

In their initial battle, PAC-1, temozolomide and radiation proved to be heroic against dog brain cancer.

The current study developed a viable brain cancer treatment with the drug combination of PAC-1 and temozolomide (TMZ).7 Researchers went beyond rats and mice to advance the study closer to humans. Pet dogs with spontaneous gliomas were treated with PAC-1, TMZ and radiation, which resulted in decreased tumor size in all three dogs. In one dog, the glioma was completely eliminated through this treatment.2 PAC-1 has provided a new treatment avenue for dogs with gliomas to increase their survival rates.

Ultimately, the goal is to increase human patient survival and even eliminate the disease.