This blog post is part of an in depth look at research linking sleep and Alzheimers. Read part 1 on the importance of sleep.

How is chronic sleep deprivation linked to Alzheimer’s disease?

Sleep deprivation refers to the ongoing shortening or complete loss of sleep due to externally imposed restrictions, such as choosing to binge on just one more Netflix episode. Most people have experienced some sort of sleep deprivation in their life, acute or chronic.

Partial loss of memory over time does not inevitably mean you have dementia. But if such memory loss disrupts daily life and brain cells are progressively damaged, then the person may be at an increased risk for Alzheimer’s disease (AD). 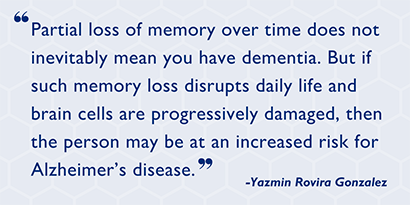 AD is the most common type of dementia and is a progressive neurological disease where neurons are destroyed, causing memory and cognition to decline over time. The brain function gradually decays because this disease disrupts the communication among neurons — specialized cells that handle important information, including learning and memories. It is well known that AD patients are chronically sleep disturbed by excessive awakenings, early morning awakening, excessive daytime sleepiness and daytime napping. Indeed, more than 60 percent of patients with AD have at least one clinical sleep disorder.

Although the ultimate cause for most Alzheimer’s cases is still mostly unknown (except for 1 to 5 percent of cases where genetic differences have been identified), there is one major theory that postulates that the miscommunication between neurons in the Alzheimer’s brain is triggered by the combined buildup of two toxic forms of proteins:

1) beta-amyloid, which aggregates in sticky clumps, forming plaques within the brain, and

Since the aberrant symptoms of AD strongly associate with the accumulation of amyloid plaques and tau tangles, they are thought to work together to drive healthy neurons towards madness and destruction.

Sleep deprivation — particularly a deficit in the restorative slumber needed for pruning and hitting the “save” button on memories — is a path through which the infamous beta-amyloid protein triggers its attack on neuron communication and memory. Matthew Walker and his team of researchers used a special type of PET scan and other diagnostic tools to assess the sleep and memory consolidation capacity of 26 normal, older adults with varying degrees of amyloid buildup in the brain. In keeping with an earlier study, they discovered that higher amount of beta-amyloid and greater sleep disruption was associated with worse performance on memory tests given to volunteers before and after a night’s sleep. More importantly, deep-sleep disruption related to the degree of memory impairment. The fact that the beta-amyloid buildup was connected to worse performance on the memory tasks highlights how Alzheimer’s might start well before people experience any change in intellectual skills.

The Effects of  Chronic Sleep Deprivation

Two years later, researchers at Washington University School of Medicine in St. Louis carried out a study in 17 healthy, middle-aged adults. They showed that chronic sleep disruption was associated with higher levels of not only beta-amyloid, but also tau protein, again suggesting that chronic poor sleep during middle age may increase the risk of Alzheimer’s later in life.

“It is clear that the percentage of sleep abnormalities that occur in Alzheimer’s disease is much greater than seen in ‘controls.’ It has also been reported that people who are developing Alzheimer’s pathology but still cognitively normal, begin to show abnormalities in sleep and circadian rhythm,” said David Holtzman, senior author of the study and expert in underlying mechanisms that lead to AD. “Thus, it appears that somehow the pathology of AD is directly or indirectly causing sleep abnormalities.”

From these critical studies, along with what we know about the glymphatic system, comes a prediction: Getting too little sleep across the adult lifespan will significantly raise your risk of developing Alzheimer’s disease. To establish a better cause-effect relationship in humans, scientists would have to follow people over time to look at whether there are increased levels of beta-amyloid after sleep deprivation that directly lead to plaque development. These human follow-up studies have yet to be accomplished. Mostly, cross-sectional and observational studies have been done in humans that further support an association between sleep disruption and poor cognitive outcomes, including Alzheimer’s.

For instance, Christine Yaffee, an expert in the field of cognitive aging and dementia, led a prospective sleep and cognition study and showed that women who had normal cognition but were sleep deprived were more likely to develop dementia after five years. Another prospective cohort study done by Andrew Lim, a physician-scientist focused on sleep disorders, showed that when older people without dementia had fragmented sleep, they had a higher risk of developing dementia over a follow-up period of up to six years. However, a problem with these prospective studies is that, even though the patients may have been cognitively normal, the fact that they develop dementia within a few years indicates that they already had the disease in their brain since, normally, it takes 15 to 20 years before dementia symptoms occur. Nonetheless, these prospective studies of sleep and cognitive outcomes still suggest that sleep disruption in middle-aged humans might represent a contributing factor to age-related cognitive decline in later life.

“I think what needs to happen to address the directionality of the association between sleep and Alzheimer’s disease is that we are going to have to use biomarkers — objective, quantifiable characteristics of biological processes — to identify people who we know do not have any type of Alzheimer’s pathology in their brain, and follow them to see whether poor sleep down the line leads to an increased risk of rise in AD-related biomarkers and AD itself,” proposed Ju. “We just started to plan this type of study here at Washington University, but this will take a little bit of time because we have to wait for these large cohorts to age and change. I hope that perhaps in 3 to 5 years we will have more information about the directionality in humans,” she continued.

The relationship between amyloid and sleep in humans is likely a two-way street in which more amyloid buildup may lead to worse sleep, and more disrupted sleep may lead to more amyloid buildup. Given that deep sleep reinforces memories as well as clears away waste byproducts such as amyloid, not getting enough sleep, then, somewhat immortalizes the poor memory cycle. This means that sleep is an underappreciated factor contributing to cognitive decline and might reduce or slow down the brain burden done by accumulating amyloid.

In the end, it is not yet clear if by modifying sleep behavior (amount or quality of sleep) you can also temper the development of Alzheimer’s pathology. But, research does suggest that sleep quality may help with Alzheimer’s. Sleep may be an easy place for possible lifestyle-based intervention.

We tend to think of sleep and sleep deprivation as a sort of short-term loan — I’ll take out a loan for not sleeping tonight, and I’ll pay it back the next couple of days (a small, short-term economy, if you ask me). However, the implications of these emerging works suggest that sleep may be more like a retirement account, where withdrawing from your present sleep habits may have long-term consequences for your future mental health. Sleep alone will not be the magic bullet that destroys dementia, but prioritizing it across the lifespan might be a factor for lowering Alzheimer’s disease risk.

« Sleep May be a Curious Piece in the Alzheimer’s Disease Puzzle (Part 1) » That’s Not Fair! — The Neuroscience of Injustice