A Conversation with Kapil Ramachandran, Johns Hopkins Graduate Student and Incoming Member of the Harvard Society of Fellows 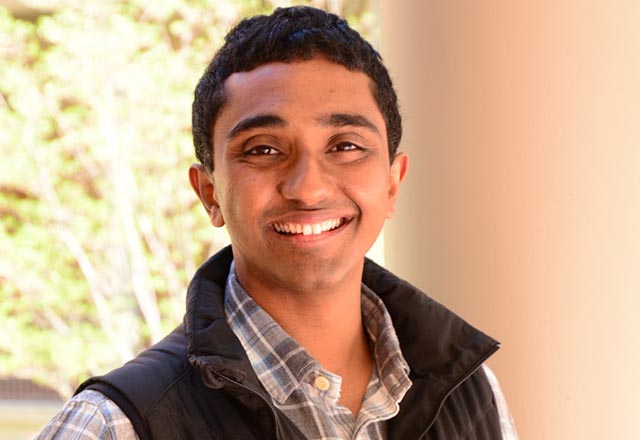 Recently, I had the opportunity to sit down with Kapil Ramachandran, a graduate student in the Biochemistry, Cellular and Molecular Biology (BCMB) Graduate Program who has been named an incoming junior fellow in the Harvard Society of Fellows. This prestigious position grants Kapil the resources to work as an independent investigator immediately following completion of his Ph.D. — a unique opportunity in biomedical research, which typically requires scientists to complete a postdoctoral position before leading their own research group. I asked Kapil a little bit about his current research, what brought him to this point and his plans for his burgeoning career.

Proteasomes Are the Key

During his Ph.D. work with Seth Margolis, Kapil found that, in the nervous system, an already well-described cellular machine had a surprising new function. “We found that the major route of protein degradation, the proteasome, was localized in a really unusual manner in neurons: it was on the plasma membrane. This proteasome took proteins from inside the cell and shredded them nto small fragments, which were sent outside of the cell.” The real surprise was that these fragments were not just garbage: “They contained neuroactive activity. Extracellular fragments could communicate with other cells.”

How would Kapil describe his finding in more general terms? “The best thing I can come up with is that this proteasome is a paper shredder between the inside of the cell and outside, and the shreds are little messages to other cells.” You can read the original report here and a Johns Hopkins news release on the project.

Kapil’s work on the proteasome is what led to his recruitment to the Harvard Society of Fellows, which has a nomination-only application process. Alfred Goldberg, a professor in Harvard’s cell biology department who contributed much of the seminal work on proteasomes, joined with Dr. Margolis to nominate Kapil because he was impressed with Kapil’s findings. “My space is going to be right next to his. It’s going to be fun. It’s a huge honor to be able to work next to him and interact with him regularly,” Kapil says. Of course, working next to a giant in the field is no walk in the park. “Pressure’s really on. I just sent him a draft of my first grant application [as an independent investigator], and I hope he’s not thinking, ‘Oh god, what have I done?’”

An Early Start in Research

How did Kapil reach such an illustrious position so early in his career? It turns out that, although many think of a Ph.D. as the start of a career in research, Kapil had already accumulated significant research experience before arriving at Johns Hopkins. “I started doing research way back in high school. I’ve kept in touch with a lot of junior scientists from those days. In particular, the people I met at the Intel competition have been very successful.”

That early exposure to research set Kapil up for a productive undergraduate research experience at Duke, where he worked for four years on a developmental disorder involving calcium channel physiology in Geoffrey Pitt’s lab. Ultimately, it was working with Dr. Pitt that led Kapil to Johns Hopkins for graduate school. “[Dr. Pitt] worked in the same lab as Mike Caterina at Hopkins during his graduate work. He is a rigorous, classic scientist, and he urged me to apply to Hopkins for my training. I said, ‘No, I’m totally going to go to Harvard, what are you talking about?’ But then I met [Dr. Caterina], and I saw that Hopkins had a very special vibe.”

Developing As a Scientist at Hopkins 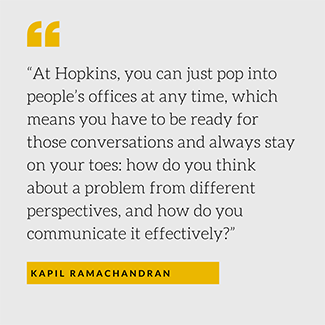 The same vibe that convinced Kapil to join the BCMB graduate program at Johns Hopkins has sustained him throughout his Ph.D. and as he prepares for his independent position at Harvard. Kapil notes that his thesis committee (three faculty members who monitor a student’s progress throughout the Ph.D. and evaluate their final thesis document) were instrumental in his training. Kapil’s committee included Caterina, Geraldine Seydoux and Jeremy Nathans. “My committee meetings were brutal. They would force me to think about every possibility, every alternative explanation for my data. The process of preparing for those meetings helped me immensely.”

The openness among scientists at Johns Hopkins was also influential in Kapil’s training. “At Hopkins, you can just pop into people’s offices at any time, which means you have to be ready for those conversations and always stay on your toes: how do you think about a problem from different perspectives, and how do you communicate it effectively?”

Now, with the start of his own lab group looming, Kapil has once again drawn upon the expertise of faculty here. “As I’ve been thinking about this new position, I’ve gone to [Dr. Nathans] and Alex Kolodkin and asked, ‘How do I prepare for this?’ And they’re forthcoming. They tell you what they think. And, more importantly, they say, ‘You’re going to do great. You’re going to be fine. Just focus on the science and you’ll do great.’ That earnest encouragement is really something. I’m really going to miss Hopkins.”

Drawing Inspiration from His Ph.D. Lab

As Kapil starts on his path as an independent investigator, he is inspired by the approach to science that his mentor, Dr. Margolis, employs in his lab. “Seth has a very low bar for new ideas. If you have a crazy experimental idea, he’ll say, ‘If there’s a simple experiment, do it.’ That’s the best thing to hear as a trainee instead of, ‘No, that’s a dumb idea.’ I don’t think a lot of people do that; I think that’s amazing.”

Kapil described how Dr. Margolis’s willingness to follow the data wherever lets the trainees take the lead. “It makes the students the expert. It’s a lot of responsibility to place on students, but he knows how to coach that effectively.”

“The other thing he does incredibly well is his graciousness: his willingness to let students give talks, the way he advocates for student successes. That’s something I hope I can do.”

It is no easy task set before Kapil. Fortunately, he can benefit from the experience of those who came before him. “There are a few faculty at Hopkins and Harvard who have done this successfully. We’ve spoken extensively about it, and there seem to be some concrete things I can do. And the [cell biology] department is totally on board. The fact that I have space and some money, it’s a really good start.”

He also has a strong community of peers. “The Fellows are a really good group of people. We have dinner and lunch every week, so it will be a good source of intellectual support outside the department.”