Who Let the Dogs Out?


I occasionally find myself walking through the dark underbelly of the Johns Hopkins medical campus along “designated laboratory transport” routes. These concrete tunnels allow researchers to transport equipment or mice from animal facilities to laboratories without passing through patient areas. I always feel a pang of sadness when I see stacks of dog food in these tunnels or cages containing a chewed dog toy waiting to be cleaned. As a researcher, I logistically understand the importance of animal research. However, I still find work with companion animals particularly hard to stomach.

It will come as no surprise that I was glad when I saw a huge billboard in Baltimore advertising the “Beagle Freedom Bill,” the nickname for Maryland Senate Bill 675, promoting the adoption of companion animals used in research. Then, a week later I happened across a Baltimore Sun article sharing that the bill had officially been passed on April 6. I innocently thought this was wonderful news and made the mistake of actually looking into the bill. Unfortunately, as with many pieces of legislature, it is not all that meets the eye. 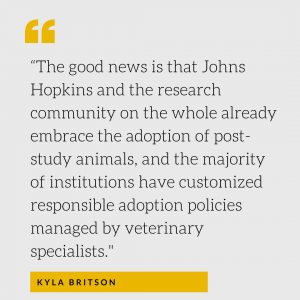 To start with the bad news, this bill exemplifies “feel good” legislation that has been slowly grinding its way through the Maryland legislature for the last two years. Initially proposed as House Bill 594 in March 2016, the Humane Adoption of Companion Animals Used in Research Act of 2016 was opposed by the Johns Hopkins University School of Medicine and the University of Maryland School of Medicine. Among other issues, the proposed bill simply duplicated requirements already in place under the U.S. Animal Welfare Act for institutions to report companion animal usage. In addition, the bill required institutions to work with a rescue organization in every case — when in actuality many animals are directly adopted by staff — and required the person or entity to whom the animal is given to be identified, potentially exposing them to harassment from animal rights groups. Fortunately, revisions in the new 2018 Senate Bill addressed several of these issues.

The good news is that Johns Hopkins and the research community on the whole already embrace the adoption of post-study animals, and the majority of institutions have customized responsible adoption policies managed by veterinary specialists (see Johns Hopkins Adoption Policy). In 2017, 49 dogs were used in research at Johns Hopkins, and 100 percent of adoptable dogs used in these studies were re-homed. Of course, research dogs can be more challenging to train and housebreak, but new studies are showing that the majority of dogs adjust well to their new homes.

A group of scientists in Munich, Germany, conducted an observational study with 74 laboratory beagles, six weeks after adoption in their new homes. The dogs were observed during specific interactions with their new owners and during a walk. In addition, more than 140 owners participated in standardized phone interviews one and 12 weeks after adoption, during which they answered questions about the dogs’ behavior in everyday situations. Eighty percent of the dogs walked well, and according to the interviews, the majority of the dogs displayed friendly and relaxed behavior, and showed bonding between dog and owner. Overall, this study indicates that research beagles can successfully adapt to their new homes.

As more graduate and medical students adopt pets to help keep them company and promote a healthy work-life balance during the grind of their advanced degrees, I encourage everyone to consider adopting a laboratory animal. As a graduate student myself, this is one way to take work home that I wouldn’t mind.