Wrapping Axons – an Ongoing Mission Throughout Your Lifespan 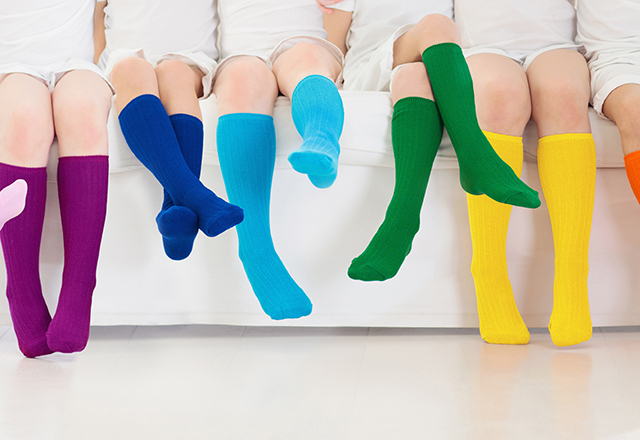 You are driving on a road and see a pedestrian approaching the crosswalk. You brake to give way. Even such a simple action as this requires multiple levels of processing in our brains — recognizing the shapes and curves that resemble a human being, observing the speed at which they move, pressing the brake with the appropriate force so that the driver behind you can stop in time. In the blink of an eye, hundreds of neurons communicate back and forth to orchestrate an effortless response.

For the neurons to communicate quickly and efficiently, their axons — the cable they use to send electric signals to each other — need to be well-insulated, just like household electrical cables. Like a good pair of socks, neurons have their own living “cable sleeves” called myelin, which is made by a type of non-neuronal cell in the brain called oligodendrocytes (Greek for “cells with a few branches”). Oligodendrocytes extend their “tentacles” to wrap layers of membrane around the axons of up to 50 neurons, providing support and signal insulation. Although, according to a new study from The Johns Hopkins University, unlike cable sleeves, oligodendrocytes seem to remodel the brain throughout one’s lifespan, demonstrating a previously unappreciated dynamic role for this cell type. [1] 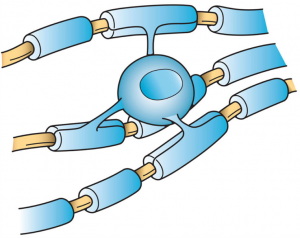 Ethan Hughes and Jennifer Orthmann-Murphy, postdoctoral fellows from the Bergles Lab, led this study, which was designed to follow individual oligodendrocytes for weeks in the brains of young, middle-aged, and old mice. This is the first time anyone has done this, and it turns out oligodendrocytes are much more dynamic than people originally thought! New oligodendrocytes continued to be generated in the mouse brains well into their adulthood, wrapping around bare axons that needed support.

More interestingly, the ongoing mission of axon-wrapping is not a brainless job. Just as every mouse has a neuronal network unique to its past experiences, Ethan and Jenn found that the manner in which axons are wrapped is also highly experience-dependent. When they decorated the mouse’s cage with something novel, such as hanging strings of beads, the mouse would constantly explore it with its whiskers. This stimulated the neurons in the part of its brain that responds to whisker touch. Surprisingly, instead of inducing changes in existing oligodendrocytes, the novel experience gave rise to production of new oligodendrocytes to wrap around neurons in that region. 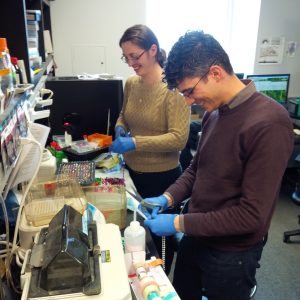 “Although little is known about the function of oligodendrocytes, we know they’re important because of their involvement in so many neurological diseases,” explained Jenn, who has been excited about these cells since graduate school. Ethan and Jenn worked in neighboring labs when they were both graduate students at the University of Pennsylvania, and they bonded over their special passion for the less-studied, non-neuronal cells. After reuniting in the Bergles Lab as postdocs pursuing the study of oligodendrocytes, Ethan has since made this topic the focus of his own lab at the University of Colorado. Meanwhile, Jenn wishes to combine her basic science research with clinical data as a physician-scientist to help patients with diseases such as multiple sclerosis that are caused by, or related to, dysfunctional oligodendrocytes.

We are now beginning to understand how axons are wrapped by oligodendrocytes throughout our lifespan, and to imagine how oligodendrocytes shape the way neurons communicate. This information can inspire and inform new insights into how humans function, learn, grow and age, and more importantly, how scientists can help patients suffering from some of the most challenging neurological diseases live a better life.