Targeting Diabetes with a High-Fiber Diet: It’s All in Your Gut!

Right this moment, your gastrointestinal tract is crammed with a vast number of different microbes, together referred to as the human gut microbiota. Don’t be too alarmed though, as this complex gut microbial ecosystem maintains a mutual and beneficial relationship with you. Given the bad reputation some bacteria have as being infectious and antibiotic-resistant, you might wonder, how could bacteria possibly be good for you? 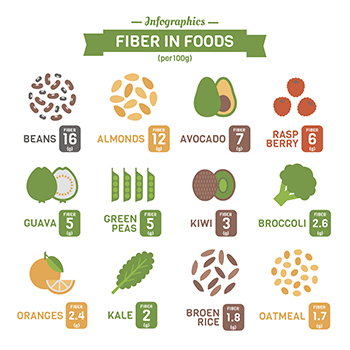 Humans consume indigestible carbohydrates — fibrous structures found in vegetables, fruits and legumes — that pass through the intestinal tract completely unabsorbed because we lack the enzymes to degrade the bulk of dietary fibers. Although these insoluble fiber foods are neither absorbed nor digested in human small intestines, they are used by friendly bacteria in the human gut as a source of energy. In return, these friendly bacteria produce short-chain fatty acids (SCFAs), which are the main source of nutrition for the cells in your colon.

SCFAs are made by bacteria that ferment dietary fibers and they exert multiple beneficial effects on mammalian metabolism. For instance, SCFAs provide approximately 10 percent of the daily caloric requirements for our bodies. In addition, cells from the colon derive 60 to 70 percent of their energy supply from breaking down SCFAs into different compounds (acetate, butyrate and propionate) that are taken up by major tissues, including liver, fat tissue, kidney and muscle. Inside these tissues, the SCFA-derived compounds take part in the control of body weight, glucose and lipid homeostasis, insulin sensitivity, and regulation of inflammation.

Deficiency in SCFA production has been associated with diseases, including type 2 diabetes mellitus (T2DM). More than 30 million Americans (approximately 1 in 10) have diabetes, 90 to 95 percent of which have type 2 diabetes - a worrying number! What would happen though, if T2DM patients adopted a high-fiber diet? Could dietary fiber provide the fuel to allow the flourishing of millions of healthy gut bacteria to make lots of SCFAs and improve the patients’ symptoms?

To answer these questions, scientists at the Shanghai Jiao Tong University conducted a randomized clinical trial. Adult T2DM patients (aged 35-70 years) consumed a large amount of dietary fibers for 84 days to perturb their gut ecosystem, after which Liping Zhao and colleagues characterized the impact of this dietary change on glucose homeostasis (blood sugar). Sixteen clinically diagnosed T2DM patients were randomly assigned to a normal diet while 27 T2DM patients were treated with a high-fiber diet composed of whole grains, traditional Chinese medicinal foods and prebiotics (indigestible plant fibers). Both groups received the antidiabetic drug Acarbose as a standardized medication. The scientists found that treating the patients with a high-fiber diet altered their gut microbiota and improved glucose levels, keeping the patients’ blood sugar in check. In addition, the levels of a blood sugar marker (HbA1c) were lower in the treatment group, aligning well with the improved glucose control. 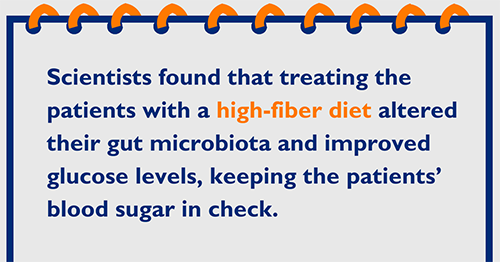 To make sure that the betterment in glucose homeostasis was indeed mediated by the gut microbiota, the researchers transplanted human gut microbiota from the same participants before and after the high-fiber diet treatment into mice, or, put simply, they performed a stool transplant. Mice that received transplants from after the volunteers had consumed the high-fiber diet had better metabolic health than the control group, exhibiting the lowest blood glucose levels before and after a meal ꟷ a sign of improved glucose control. The fact that the mice showed the same improvements in glucose control that were seen in the T2DM patients who munched on a high-fiber diet provides compelling evidence that dietary fiber can stabilize blood glucose levels by reshaping the profile of the gut microbiota.

Next, the researchers wanted to figure out how the high-fiber diet affected the overall composition of the gut microbiota in these patients. They sequenced the DNA of fecal samples from T2DM patients in both the control and treated groups and found an abundance of bacterial genes that are responsible for breaking down different carbohydrates and are involved in the SCFA pathway. What was interesting was that the researchers identified 15 strains of bacteria that were major producers of SCFAs, and most likely contributors to the improved metabolism in the context of high-fiber intervention for T2DM.

One cannot deny that the study had some minor flaws. The sample size was small, the 15 strains identified did not share the same taxonomic relationship (strains were from three different genetic lineages), and there are many interesting follow-up questions that remain to be answered. But, one cannot deny that increasing dietary fiber consumptions to redirect healthy microbiota toward better blood sugar control may present a simple approach to managing T2DM and perhaps other diseases that are mediated by imbalances in the gut microbiome.

Who knows, maybe that morning dose of Metamucil does more than you think!