The Puppets of Parasites


We’ve all experienced illnesses where parasites or small infectious agents such as bacteria and viruses are the culprits. But what happens when those pathogens start to influence the behavior of their hosts? Here I’ll discuss three different parasites that manipulate host behavior, delineate some potential mechanisms for their influence and outline some of the theory behind why and how parasites have come to influence behavior.

The most well-known example of a pathogen influencing behavior is rabies. Everyone remembers the tear-jerking scene from Old Yeller, where a young boy is made to kill his dog who has been infected with rabies, so as to avoid the danger of a once-friendly dog that has now turned aggressive and hostile. Although we now have good vaccines for rabies, we still don’t entirely understand the mechanism underlying how it influences behavior. Generally, rabies is characterized as causing significant fear, aggression, frenzy and biting in the host. Many scientists believe that the virus causes this change in the host’s behavior in order to facilitate its own spread. This is known as the “parasitic manipulation hypothesis,” and will be discussed later in this article.

But how can something as small as a virus influence something as complex as behavior in a large mammal like the dog? Scans that look at overall activity in the brain do not provide us with many clues. In fact, we had few leads until a recent article was released in the journal Scientific Reports. The article lent insight into the devious secrets of the rabies virus, namely the small sugar tags, called glycoproteins, that decorate its outer coat. This 2017 study1 showed that injecting that sugar tag alone into mice is enough to cause aggression. Further, the glycoprotein can bind and inhibit receptors on brain cells that usually release the neurotransmitter serotonin. Because serotonin is generally associated with feelings of calmness and well-being, a new hypothesis among the scientific community now suggests that when an animal is infected with rabies, the cells don’t release as much of the calming chemical, leading to increased aggression in the animal.

The next example of a host-manipulating parasite is a fungus called Ophiocordyceps unilateralis. For this fungus, production and dispersion of its spores relies on the modification of behavior of infected ants. This pathogen infects carpenter ants and induces what is colloquially known as “zombie ant syndrome.” Infected ants start to exhibit a peculiar behavior in which they climb a plant stem to 25 centimeters, lock their jaw around a leaf, and stay there until they succumb to the fungus and die (known as the “death grip”). Eventually, the fungus sends a stalk through the ant’s head, which releases spores. The spores rain down onto ants below so that each infected ant can infect exponentially more ants, and the fungus will propagate.

How might the fungus be making the ants behave this way? Unlike rabies virus, the zombie ant fungus acts on its host outside the brain. In fact, the fungus never infects neurons. Instead, the fungus sets up shop in the muscles of the ants. The current hypothesis is that the fungus is actually able to exert direct control over the ant’s muscles, telling them when to contract and when to relax.2 In this case, the parasite can be thought of as a sort of “puppet master.” Think of it as the Disney film Ratatouille, in which Remy the rat can exert control over Chef Linguini’s actions without actually infiltrating his mind.

The last behavior-altering parasite I’ll discuss is called Toxoplasma gondii. This example is particularly fascinating as it is possible that the parasite can cause subtle but significant changes in human behavior. The Centers for Disease Control and Prevention approximates that 60 million people in the U.S. have the infection, most likely in its latent form. When an individual with a healthy immune system is exposed to this organism, the active parasite is eradicated quickly. The parasite remains present in latent form and usually causes no symptoms. If you are immunocompromised, however, the parasite is not fought off as quickly and can get into the brain, where it forms cysts in neurons that can rupture and cause all sorts of problems. If you are pregnant, it is likely that you will miscarry, have a stillbirth or give birth prematurely. Even if the baby is born, it is likely to have brain, respiratory, renal, hearing or many other types of defects. 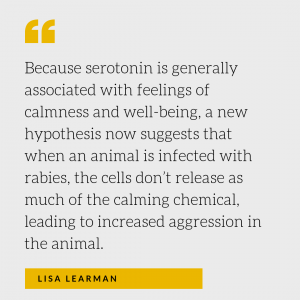 If you have ever heard that pregnant women should not change cat litter, T. gondii is the reason. This is because the main host for the parasite, where it can replicate freely and complete its life cycle, is the cat gut. Under the parasitic manipulation hypothesis, when Toxoplasma gondii is living in organisms other than the cat, it will change the behavior of that organism such to improve its chances of getting to the cat. For example, rats are normally repelled by the smell of cat urine. This makes sense, as the cat is a predator to the rat, so the rat should take measures to avoid it. However, rats infected with T. gondii change from their usual repulsion to the scent of cat urine and are actually attracted to it. This not only puts the rat’s life at risk, but could be seen as a strategy by T. gondii to get to the cat: Make the rat go where the cats are, the cats bite and eat the rat, and T. gondii enters the cat gut, its most ideal host.

Since about a third of all humans in developed countries have the latent form of T. gondii, it is reasonable to wonder if and how the parasite influences human behavior. Most of the studies on this have been performed by parasitologist Jaroslav Flegr from Charles University in Prague. The studies show mild but significant changes in human behavior that depend on the length of the infection and the sex of the host. In these studies, subjects were categorized as infected or not infected with latent T. gondii via the presence of antibodies for the parasite in their blood. Then, the subjects were given a variety of personality and behavior tests. In these tests, infected men were more likely to disregard rules, be suspicious, jealous and dogmatic, while infected women were more likely to be warm, outgoing, conscientious, persistent and moralistic.3 But wait a second, how can we know that this is causation and not just correlation? Since you can’t test the same people before and after infection to see if their behavior changes, how do we know that the infection influences the behavior and not the other way around? In other words, how do we know that men who “disregard rules” are not just more likely to engage in behaviors that could lead to infection by the parasite? The answer: The studies saw an increase in severity of the behavioral changes that corresponded to increased duration of infection. This key piece of evidence suggests that T. gondii infection influences behavior.

So T. gondii infection definitely changes behavior in cats and probably changes behavior in subtle but significant ways in humans. What are the potential mechanisms for this? There are a number of possibilities.4 First, the pathogen could be acting indirectly on the brain. According to this hypothesis, the immune responses required to keep T. gondii dormant lead to changes in cytokine levels, which can then lead to inflammation and neuromodulation in the brain that could influence behavior. Alternatively, T. gondii could be acting within the brain itself. In this hypothesis, the host starves itself of the amino acid tryptophan in response to T. gondii infection, and as a result synthesizes byproducts that can modulate the activity of NMDA receptors in the brain. This type of receptor is essential for synaptic plasticity (the selective strengthening and weakening of neuronal connections), which is largely regarded as the cellular basis of behavior.

In cases of the rabies virus, zombie ant fungus and cat poop parasite, how do we know that the parasite is causing behavioral changes in order to increase its own transmission? How do we know it’s not just a side effect? This is a hotly debated topic amongst experts in the field. The parasitic manipulation hypothesis states that the parasite enhances its own transmission by altering host behavior. It turns out that it is very difficult to prove that the observed behavioral changes are not just a side effect or that the host isn’t just adapting to reduce the fitness consequences of the infection. Considering these challenges, how do we proceed with studying this? The parasitic manipulation field has put together some guidelines. A behavior can be described as being a result of parasitic manipulation if the changes in the host 1) are complex, 2) show signs of purposive design, 3) have arisen independently in several lineages of the host and the parasite, and 4) increase the fitness of the host or the parasite.5 Within these guidelines, which should inevitably change as we learn more, we can continue to learn about how parasites manipulate host behavior to their own ends.

3. Flegr, J. (2013). Influence of latent Toxoplasma infection on human personality, physiology and morphology: pros and cons of the Toxoplasma–human model in studying the manipulation hypothesis. Journal of experimental Biology, 216(1), 127-133.