Learning Through Apprenticeship: A Continued Pillar of Medical Education

“See one, do one, teach one,” is the traditional adage by which physicians learn their trade. This apprenticeship model in medicine is often credited to William Stewart Halsted, the first surgeon-in-chief of Johns Hopkins and the founder of its surgical residency program. Although much has changed in the halls of The Johns Hopkins Hospital since 1890, learning through apprenticeship remains a dominant force in medicine.1

Apprenticeship has been a central teaching methodology for thousands of years, used across the centuries by ancient Greek soldiers, medieval blacksmiths, Renaissance painters and, more recently, physicians. While it’s true that medical education has evolved significantly from the practice of students simply watching a procedure once and then attempting it themselves, much remains unchanged. It turns out there is no substitute for immersion in the clinical environment, with progressive responsibility from active observation to complete autonomy as the roadmap to mastery. 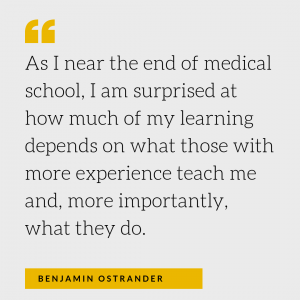 The reality of this model quickly materializes for the third-year medical student, who overnight is thrust from didactic coursework in the classroom to full immersion into the clinical environment. Suddenly, the physiologic minutiae become less immediately relevant, and students actually begin to learn what it takes to take care of patients.

However, apprenticeship has been modernized and improved upon to some extent. In 2003, the Accreditation Council for Graduate Medical Education (ACGME) moved from a time-based training model to a competency-based model through implementation of the 80-hour work restriction, thereby shifting away from a training model that emphasized the importance of time on the wards.2 Concerns about patient safety resulting from inexperienced learners performing oftentimes difficult procedures have also led to calls for a different, safer training paradigm.3 Novel educational resources, including high-fidelity simulations, extensive online databases and learning tools with detailed texts and videos, and competency-based evaluation, have augmented the apprenticeship model.

Additionally, the rise of evidenced-based medicine seeks to unify effective practices and reduce variation, such that instead of “doing as your elders do,” students are instead taught to do what is right to the best of our current knowledge. The best teachers and clinicians frequently review the evidence, including new literature, guidelines and clinical research, and adjust their practices and teachings as the evidence evolves. Yet it is difficult to keep up, and in many situations the evidence is inconclusive. After convening world experts on a topic, reviewing the evidence and creating detailed practice guidelines, how many U.S. Preventive Services Task Force (USPSTF) recommendations are Class C, D, or Inconclusive? What to do in these cases? Defer to your teacher.

As I near the end of medical school, I am surprised at how much of my learning depends on what those with more experience teach me and, more importantly, what they do. In the operating room and in the clinic, every doctor has a unique style, with minor variations in technique, preferences, speed and teaching style. Generally, these variations are thought to have relatively little impact on patient outcomes, although often the effects are unknown. But I can’t help but wonder if larger variations and deviations from the optimal or evidenced-based method occur as a result of simply doing what the attending does. The surgeon becomes so accustomed to giving cephalexin antibiotics prior to the start of the operation that she rarely questions if there might be a better choice for this specific patient. One can imagine more egregious scenarios than this, particularly in less academic settings across the country. Obviously, no one has time to question every medical decision, but perhaps a healthy sense of skepticism about the status quo is warranted?

As I prepare to enter residency and continue my path as a lifelong learner in medicine, I am thankful to all my teachers. But I also urge my colleagues and teachers to continually question why we do what we do, and to wonder if there is a better way.

« The State of Johns Hopkins Medicine Address: What Is It? » Hope for Treating Duchenne Muscular Dystrophy