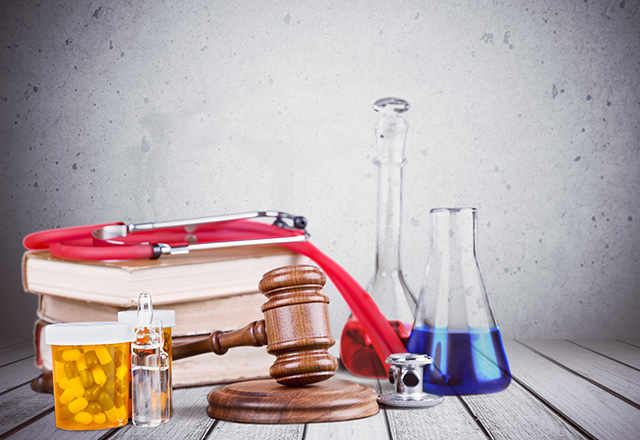 I used to feel like doing science was my way of putting good into the world. I would work on problems related to human health and make discoveries that could be implemented to help people. Recently, however, I have come to realize that research cannot possibly help people unless it is adequately reflected in policy. So how do you make sure your government has policies that reflect scientific knowledge? At a recent Johns Hopkins event, three experts explained why and how scientists should advocate for evidence-based policy.

On Thursday, Oct. 25, the Johns Hopkins Science Policy Group hosted a Science Policy Town Hall. The goals of this panel-style event were for the Johns Hopkins community to learn about the most critical science policy issues of our time by engaging with faculty experts. These issues included reproductive and sexual health, climate change, and the opioid crisis. The panel consisted of Diane Horvath-Cosper, director of Whole Woman’s Health of Baltimore; Tom Burke, former EPA deputy assistant administrator and science adviser; and Travis Rieder from the Berman Institute of Bioethics. As the session progressed, it was clear that not only are the panelists experts in their areas, but they are also extremely effective and motivational science communicators. What follows is a summary of their thoughts and recommendations.

Tom Burke was the climate change expert on the panel. In addition to being the Jacob I. and Irene B. Fabrikant Professor and Chair in Health Risk and Society at Johns Hopkins University Bloomberg School of Public Health, Dr. Burke served as the EPA science adviser and deputy assistant administrator for research and development from 2015 to 2017 under President Barack Obama. He has directed many initiatives and national health programs and even worked with Obama as the Paris Agreement was being drafted. The Paris Agreement is an agreement within the United Nations Framework Convention on Climate Change under which each participating country must determine, plan and regularly report on the efforts they undertake to mitigate global warming.

According to Burke, one of the biggest climate change policy issues today is President Trump’s pledge to withdraw from the agreement in 2020 (the earliest possible withdrawal date). Internationally, this statement drew overwhelmingly negative reactions from across the political spectrum. Although shocking and upsetting to many, Burke pointed out that it “galvanized world support for the cause,” and recommends that we adopt a hopeful but active strategy, stating that, “The science is there. The effort is there. You have an incredibly important role to play.” This could include signing petitions from local organizations such as the Maryland Climate Coalition or holding your institutions responsible for divesting from fossil fuels.

Diane Horvath-Cosper was the panel expert on reproductive and sexual health. She is the director of Whole Woman’s Health of Baltimore and has been outspoken in her conviction that women have access to safe, legal abortions. According to Horvath-Cosper, it is a terrible time for reproductive and sexual health. She stated that the significant gains in this area made by the last administration are being rolled back, and provided three areas where science advocacy can help.

The first area is contraceptive access and coverage, which has been specifically targeted by efforts to overturn previous legislature and defund Planned Parenthood. The second area is access to abortion services and evidence-based information regarding abortion. Dr. Horvath-Cosper noted that we should be aware of TRAP laws, which impose unnecessary standards on abortion providers that make it difficult for them to stay open. In addition, we should rally against laws that control what doctors say to patients receiving abortions. Some states have laws requiring doctors to tell their patients that early-stage fetuses feel pain, although peer-reviewed, established science suggests that this is not the case. Some doctors are even legally forced to tell patients that abortion can be reversed. The final area on which Dr. Horvath-Cosper recommended we focus is the attack on LGBTQ rights. Specifics in this area included the Trump administration’s recent effort to legally define sex as binary, when science “know[s] that’s not true.” According to Dr. Horvath-Cosper, the best ways to act to promote change in these areas are to vote, encourage others to vote and protest to draw attention to the issues. Follow Dr. Diane Horvath-Cosper on Twitter @GynAndTonic. 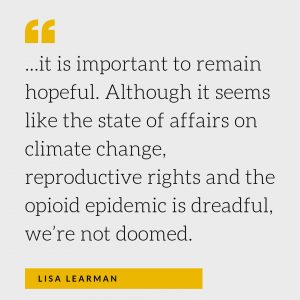 The third panelist was Travis Rieder — a philosopher, bioethicist and expert on opioid policy. Director of the master of bioethics degree program and research scholar at the Berman Institute of Bioethics, Dr. Rieder started his career studying the ethics and policies of sustainability and planetary limits. However, a recent personal experience with prescription opioids caused him to switch focus (watch the TED Talk here). There are 2 million–3 million people in the U.S. with opioid disorders. Dr. Rieder stated that there are “deep chasms” in health care systems that exist because doctors don’t know how to prescribe the drugs, noting that “since opiate withdrawal doesn’t kill you, doctors are bad at it.” According to Rieder, the U.S. has abandoned pain patients instead of teaching doctors how to use opioids. Since the world looks to the U.S. as an example for prescription policy, this epidemic will spread. In addition to teaching doctors how to prescribe opioids, we must dedicate some of the resources to damage control.

Recently, President Trump signed legislation into law that dedicates $6 billion–$8 billion to the opioid crisis, and this is “being celebrated as a huge achievement.” Rieder argues that not only is that amount of money “tiny” compared with funding for other efforts, but none of the funds is going toward harm reduction in users. According to Dr. Rieder, the opioid crisis is not partisan in the same way as other issues. Trump country (rural areas that comprise a large portion of Trump’s support base) has been devastated by this epidemic. Theoretically, this should make it easier to shape policy to fix this issue, but so far that hasn’t really been the case. Rider calls the opioid crisis a “bipartisan epidemic and a bipartisan failure,” stating that it will take bipartisan efforts to see that the science is reflected in the policy. The Johns Hopkins Hospital has recently created new guidelines limiting the number of opioids prescribed for common surgeries.

What We Can Do As Scientists – Communication and Action

Although each individual panelist had recommendations for how to face these issues, there were some common themes. One of these was that we must become better communicators. In their own ways, each of the panelists suggested that a driver of the problems in science policy is that we fail to communicate our science in a way the public can understand. Dr. Horvath-Cosper stated that “It’s nuance as to why one study is good and one is not. It’s hard for even some scientists to understand.” As such, the panelists urged anyone who plans on working in the public arena to take media training and science communication classes.

The policy experts also encouraged us to take action. Dr. Burke stated, in regard to climate change, “To make change, we don’t need denialists to change their opinions. We need believers to act.” Evidence can’t drive policy without political will. Dr. Horvath-Cosper urged people to vote and protest. Even if you live in a state where your officials agree with you, challenge them to do even better. Use your voice and write op-eds and letters to the editor.

Finally, while acting, it is important to remain hopeful. Although it seems like the state of affairs on climate change, reproductive rights and the opioid epidemic is dreadful, we’re not doomed. When asked whether we really can turn our climate around before it’s too late, Dr. Burke’s response was at once melancholy and bolstering: “We don’t have enough time, but we’re at our best when things are at their worst.”