An Evolving Situation: Measles and the 21st Century Vaccination Crisis

On the Johns Hopkins “Measles: What You Should Know” page, the last Q&A states:

Q: What should I do to protect myself and my family?

It seems like such a simple solution to a global problem. Yet so many children, about 7% in the United States, remain unvaccinated well into elementary school. Many people have written about why this outbreak has occurred. Most of them, particularly those in the media and medical profession, blame this statistic on the recent upsurge in anti-vaccination sentiment. This blame and the questions following it are not new, though. Scholars such as Nadja Durbach and Karen Walloch have tried to understand how and why anti-vaccination movements began and have persisted to the present day. I even wrote a Nursing Clio blog post about the tension between mothers and doctors as a potential impetus behind anti-vaccination attitudes. In the last few months, the media has also pondered this connection. Headlines such as “How a Group for Jewish Moms Spread Anti-Vax Propaganda before New York’s Measles Outbreak” and “Anti-Vaxxers Open Door for Measles, Mumps, Other Old-Time Diseases Back From Near Extinction” try to make sense of why a highly preventable disease has made a sudden comeback. 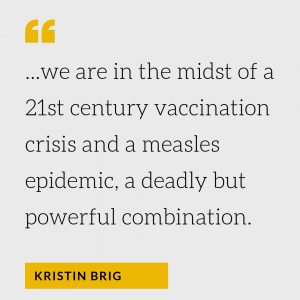 This group clearly cannot be soothed by scientific facts and statistics alone. Furthermore, not every unvaccinated person belongs to an anti-vaccination group. Blaming anti-vaxxers overshadows other crucial factors in why people choose not to get vaccinated. According to the U.S. Census Bureau, about 28.5 million Americans had no insurance coverage in 2017, and there is little reason to think this number has shifted significantly since. The MMR vaccine is either free or low-cost if you are on a plan, but what about those 28.5 million who are not insured and potentially cannot afford the cost?

Furthermore, MMR vaccination takes place within a surveillance framework. Compulsory laws require people to vaccinate their children regardless of their worries or socioeconomic problems, with harsh penalties for non-compliant persons. Recent laws in Rockland County, New York, and other jurisdictions in the state have begun banning children from public gathering areas, including houses of worship. Not only do parents see this as impeding their family’s freedom of movement, but it also promotes increasing stigmatization of religious communities that are already considered marginal communities in contemporary American society.

If you stop me on the street and ask me if these children should be vaccinated, of course, I will reply “yes.” But force is not the best way to reach people. The history of public health has shown us that compulsory laws like these often create more havoc than order for many populations. Public health legislation has led to ethnic and racial segregation, environmental injustice for lower-class communities, and denigration of cultural values targeted as unhygienic to the rest of society, particularly middle-class society. Sure, compulsory smallpox vaccination led to the global eradication of the disease in the 1970s. But from the time of its 1796 discovery, smallpox vaccination involved human and animal experimentation, the jailing and fining of working-class mothers, and the subordination of indigenous cultures to colonizing powers.

No matter who we blame, measles is still present and increasing in strength on a global scale. On April 17 alone, news outlets talked about an Israeli flight attendant falling into a coma after catching the disease; a measles case declared at Google headquarters; and an infected man who traveled from New York to Michigan carrying the disease who was misdiagnosed by a doctor unfamiliar with its symptoms. This man is the probable “patient zero” who believed himself immune to the disease after catching it over 30 years ago.

In Baltimore, all of this seemed far off until we received “A Message from Johns Hopkins Medicine” in our mailboxes that evening. According to the email, the Maryland Health Department reported a third measles case in Baltimore. “We continue,” the message read, “to work closely with the state and local health departments to respond to this evolving situation.”

Perhaps as more people see and understand what a measles diagnosis means, they will accept, or at least succumb to, vaccination. We hope the anti-vaccination movement will say, “if measles can land my child in a coma or give them brain damage, perhaps vaccination is a safe bet.” Until then, we are in the midst of a 21st century vaccination crisis and a measles epidemic, a deadly but powerful combination.

If you or someone you know has been in contact with a measles patient, Johns Hopkins has provided an informational PDF of Infectious Control Contacts: https://intranet.insidehopkinsmedicine.org/heic/_docs/Important_Phone_Numbers.pdf.

For more information on measles and the vaccine, please check out the CDC’s information page: https://www.cdc.gov/measles/vaccination.html.

This is a serious disease, even for adults—please do not take it lightly.