Every summer, a fresh crop of physicians enters the workforce. Overnight, trainees begin new roles and take on new responsibilities. You could imagine that we transition gracefully, like caterpillars turned butterflies, wings beating with effortless aerodynamics upon emerging from the chrysalis. Truthfully, we are more akin to baby birds, pushed off a branch and made to fly. In those critical moments, as gravity manifests its effects and wings begin to flap with yet uncertain flight, we are forced to confront our task, shed all self-doubt and rise higher.

Entering the hospital as a medical student is the first major transition in medical training. At some point in medical school, students step into the hospital and begin rotating through all the major specialties of clinical medicine. I started on surgery, within the emergency department trauma surgery consult service, rotating 24 hours on and off for two weeks. They called it “the pit,” a massive underbelly filled with hundreds of undiagnosed illnesses, ceaseless work and not a single ray of daylight. In reality, the emergency department is a gateway crossed by the sick toward help and healing — devoid of chances to watch sick patients heal completely, yet witness to the gritty start of every story.

Thus, as I stood at the threshold of the hospital that is the emergency department, while also at the threshold of my next step in clinical training, I could not remember anything from my textbooks. My senses were too overwhelmed. For 24 hours, the various beeping of monitors and alarms, the moans and yells that easily traversed thin curtains separating patient beds, the medical conversations full of indecipherable jargon. For 24 hours, the smell of urine, vomit and diarrhea competing with Purell, electrocautery and more Purell. For 24 hours, the scenes of mangled limbs being rejoined, black-and-white chest X-rays filled with bullets and brightly colored guts spilling from open intestinal cavities. For 24 hours, feeling what it’s like to throw a good stitch, examine a tense abdomen or open a pack of gauze at exactly the right time without being asked. For 24 hours, a blur that eventually forced me to sleep before I could process any of it.

Internship was the first year of my three-year residency in internal medicine. The transition from medical student to intern was a welcome change. The intern is the workhorse of the team, the person who makes things happen, the order-writer and the consult-caller and the primary communicator with patients. I adored having a clear role in the team; I was thrilled to be learning while earning an income; and I loved being judged for my actions (as opposed to the many inconsistent standards of evaluation that characterize medical school clinical clerkships).

In the early days, my senior residents were my guiding lights. Senior residents are second- and third-year residents whose role is to supervise and teach first-year residents, also known as interns. “Resident M” was the embodiment of wisdom and patience. We would be on call together for 30 hours every four days. She taught me everything: How to use the computer system. How to perform procedures, tapping bellies of patients with cirrhosis to diagnose infection. How not to overdose insulin and how to adjust gabapentin during renal injury. How to present plans concisely on rounds without looking at a piece of paper. How to tell someone they have cancer. How to breathe during an emergency, while thinking through differential diagnoses. How to find humor despite exhaustion and stress. How to own and fix my mistakes. Once, I accidentally ordered daily “BNPs” (basic natriuretic peptides) on all the patients instead of daily “BMPs” (basic metabolic panels) — although she got a kick out of sharing this with everyone on rounds, she had already fixed it for us, because we were a team.

As intern year wore on, I continued carrying the dense weight of heavy patient care responsibilities. I had to know everything about my patients, or else who would? I had to be their greatest advocate, otherwise who would speak up for them? I had to diagnose and treat them, because who else could? Although ownership of these responsibilities was pivotal in making me a good doctor, I naively hosted an inflated perception of my role in patients’ health. When I couldn’t fix everything, I was devastated. When patients became sicker, I blamed myself. In these times, I never made any effort to hide despondence from my superiors. I was transparent as glass. 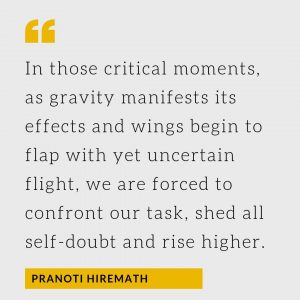 When I finished internship, I was tired of the grind of residency. I no longer wanted to field nonstop pages or do mind-numbing paperwork. I enjoyed caring for patients, but this was perhaps the only thing that kept me going. When my perceived impact on a patient’s care was minimal, my physical and mental exhaustion worsened. However, my responsibilities had changed, giving me little time to reflect. Since internship was over, I began my second year of residency, a transition that gave me the title and responsibility of “senior resident.”

I was assigned to a team with 18 patients, two interns (one going into psychiatry, another going into emergency medicine), and one fresh medical student. It was all new, but after observing my seniors in years past, I knew that I wanted to run my team based on certain principles. My priorities were clear: first, the patients; second, the interns and medical student; third, sanity. We sat in a circle, made personal introductions, set expectations, shared learning goals and discussed preferences regarding feedback. Despite all this, our first week was rough. The interns questioned my decisions and resented me for smothering their independence until I explained to them the details of my clinical reasoning — and until they witnessed results. In turn, as we had not yet established trust, I leaned toward being too involved as opposed to being too aloof.

Tensions were high as we started our second week, beginning with a 30-hour call together. Since we were all nervous about our job as “code team” (the team that leads cardiac arrest resuscitation anywhere in the hospital), I talked us through what happens during a code. We decided what each of us would do when the code started, including how we would communicate and where we would physically stand. We reviewed the 10 most common causes of a code. On cue, just as we finished our discussion, the code pager went off — and we ran. In the process of guiding everyone else, I forgot my nerves and found focus. The patient was resuscitated, my team was proud of me and I was proud of them.

We grew to trust each other and developed our own style as a team. I better understood where my interns needed support versus space — and then I pushed them toward independence. The interns were the stars and I was the dark night that brought them to light. I gave them credit, supported their decisions and conveyed feedback in confidence. Although I was far from perfect, I tried to support them in specific ways: If they grew tired, I stepped up; if they hadn’t eaten, I brought food; if patients or other providers gave them a hard time, I backed them up. It took time and a few missteps, but they grew to be happy and confident in themselves while also valuing my input. At times we disagreed, but we did so openly and without rancor, such that we usually found resolution. Our medical student shone brightly as our entire team thrived. Our patients did well, as our unity led to improved care.

I had never worked so hard in medical training — reading for my own learning, checking orders, getting to know patients, arranging discharges, teaching and assuming primary responsibility for every decision. Yet somehow, for the first time, I had a new energy. Adam Grant writes in Give and Take, “The perception of impact serves as a buffer against stress, enabling employees to avoid burnout and maintain their motivation and performance … a sense of lasting impact protected against stress, preventing exhaustion.” My role, initially focused solely on patient care, had expanded to include the additional responsibilities presented by leading a team — and this transition brought a feeling of buoyancy that I hadn’t previously experienced. I now felt the need to convey positivity, calm and joy of medicine to those who looked up to me; in turn, this effort made me calmer, happier with my job and more optimistic. Being a senior resident has, without a single doubt, been my favorite part of becoming a doctor.

As a cardiology fellow rotating in the coronary care unit, I have the joy of seeing many residents in different stages of flight, entering their new roles in medical training. One morning I noticed that the senior residents on the team had assumed new identities, after our patient had bestowed each of them with a superhero alter ego. Senior Spider-Man is thoughtful, nimble, independent and wears red tennis shoes. Senior Batman is smart, affable, stalwart and continuously circles patient rooms with diligence. Senior Superman is tall, resilient, motivated and hasn’t succumbed to clinical kryptonite. They are a powerful trio.

As docs everywhere transition to new positions this summer, I encourage them to remember that the challenging things — the newness, the heavy responsibility, the sense of impact you’re making — will support them through the changes. Every transition carries an opportunity for transformation.

« Considerations for the Manufacturing of Cell and Gene Therapies for Humans » Meditation: Building a Community Across the Hopkins Campus