They say you can get used to anything given enough time. Yet, I still haven’t gotten over my awe of sharing the halls of Johns Hopkins with Nobel laureates. I remember my surprise when Dr. Carol Greider taught us about telomeres and how they are maintained by the enzyme telomerase in my first-year molecular biology and genomics class. In 2009, Dr. Greider, Dr. Elizabeth Blackburn and Dr. Jack Szostak were awarded the Nobel Prize in Physiology or Medicine for their discovery of telomeres and telomerase. It was the scientific equivalent of being taught by a celebrity. To date, 29 people associated with Johns Hopkins as a faculty member, fellow, resident or graduate have received a Nobel Prize, and four of these laureates are current faculty members, including 2019 Nobel laureate Dr. Gregg Semenza.

The Nobel Assembly at Karolinska Institutet awarded the 2019 Nobel Prize in Physiology or Medicine jointly to Dr. William Kaelin Jr., Sir Peter Ratcliffe and Dr. Gregg Semenza “for their discoveries of how cells sense and adapt to oxygen availability.” When this news broke in October, the campus was taken by storm, and there were several congratulatory events and lectures.

More recently, Dr. Semenza gave a keynote presentation for the Hopkins Medicine Distinguished Speaker Series (HMDSS). The series is organized every year by a group of medical students and supported by Dr. Roy Ziegelstein and the office of the vice dean for education. This year, the HMDSS committee is composed of Alexander Blum, Mohamed Mohamed, Jaclyn Nguyen and Anthony Salerno. 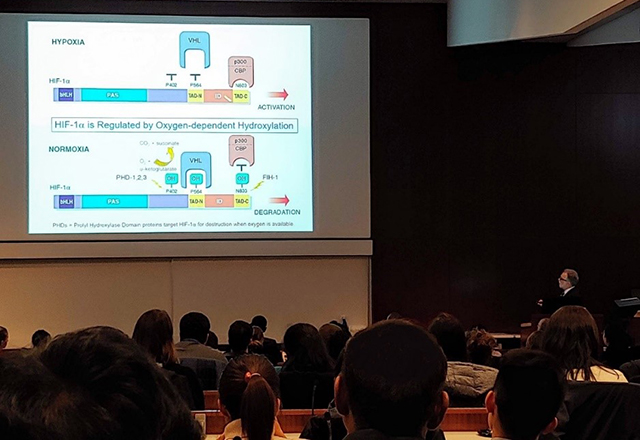 By the time the seminar began, there was standing room only in the large lecture hall. Dr. Semenza divided his lecture into five parts: control of red blood cell production, vascular disease, cancer, eye disease and life at high altitude. The first part of the talk encompassed the work for which he, Dr. Kaelin and Sir Ratcliffe were being recognized by the Nobel Assembly. Dr. Semenza’s lab was interested in how red blood cell production is controlled by changes in oxygen levels. The lab used a DNA/protein binding test to discover a protein that binds and turns on the erythropoietin gene, which controls red blood cell production1. This protein was enriched in cells deprived of adequate oxygen supply, a condition called hypoxia, and the protein was accordingly named hypoxia inducible factor (HIF). That is to say, in low oxygen conditions, the HIF protein turns on genes that increase red blood cell production. Further research by Dr. Kaelin and Sir Ratcliffe revealed how HIF can sense the oxygen level. Under normal physiological levels of oxygen, HIF is chemically marked with an oxygen-containing molecular tag that codes for its destruction, such that it cannot act to turn on red blood cell production genes2,3,4. However, under hypoxic conditions, there is not enough oxygen for HIF to be tagged. It can escape destruction, allowing it to drive expression of its target genes such as erythropoietin.

Humble throughout the presentation, Dr. Semenza made a point of acknowledging the researchers and collaborators who made these discoveries possible, such as Dr. Guang Wang, a postdoc in the Semenza lab at the time who was instrumental in the initial discovery of HIF-1, as well as collaborator Dr. Tom Kelly, whose lab was one of the first to purify a protein based on its interaction with DNA.

The rest of the lecture focused on discoveries built upon the foundation of this HIF research, which demonstrates that the Nobel Prize only directly acknowledges a small snapshot of the work a scientist has contributed to his or her field. Dr. Semenza went on to discuss hereditary polycythemia, a disease caused by mutations in genes involved in the HIF pathway, resulting in the overproduction of red blood cells in the bone marrow. This was the first of four ways Dr. Semenza tied his work understanding the basic biology of HIF and oxygen homeostasis to human disease. More recent work in his lab has explored HIF overexpression in tumors and the use of HIF-1 antagonists to treat ocular neovascularization.

In the words of Dr. Semenza, “I think it’s really great for people to get a sense of research and to see how fundamental discoveries can lead to very practical results, ultimately. For the public to get some sense of what science is like, and when you can make that connection to the diseases that most people end up being affected by — heart disease, cancer — the public can really appreciate the impact of scientific research.”5 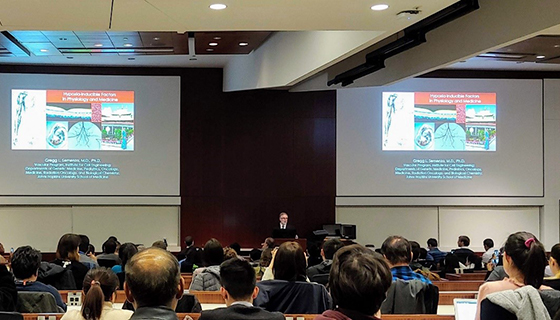 Share This Post
basic scienceGregg Semenzanobel prizeResearch
« What Happens to Heart Cells in Space? » Should We All Go Vegan?