As an immunologist, climate change is far from my area of expertise. When I attended the National Science Policy Network Symposium in Madison, Wisconsin, I signed up for the C-ROADS Climate Change Negotiations Simulation mostly because the title was provocative and I figured maybe I could learn something beyond my basic understanding of climate change. I was aware that climate change was a serious problem. However, I didn’t know much about the tangible impacts, so climate change policy was not among my top policy concerns.

A few days prior to the simulation, I received an email telling me that I was “to represent a U.S. delegate in negotiations at the United Nations World Climate meeting” in the simulation. I looked over the brief.

The goal of the negotiations was to limit global warming to “well below 2 degrees Celsius,” as was agreed upon in the 2015 Paris Agreement. As a U.S. delegate, I needed to keep our national interests in mind during the negotiations and make sure all countries were pulling their weight — since everyone’s emissions collectively contribute to the climate crisis.

Seemed interesting enough. If any group of participants is likely to figure this out, it’s surely going to be a group of young scientists interested in science advocacy (the cohort of attendees at this symposium).

When I arrived at the simulation as a U.S. delegate, I was directed to a nice table with chairs and decorations. I noticed that students representing India and China had chairs but no table, and those representing developing nations had to sit on the floor.

“I guess they’re going all out,” I thought. My interest was certainly piqued.

They opened the activity by explaining that C-ROADS is a peer-reviewed and award-winning platform, “which allows participants to find out how their proposed policies impact the global climate system in real-time.” We were informed that this platform has been used all over the world and is designed to be used by anyone, from community members to foreign policymakers. It was even used by President Obama’s climate-change team, including past Secretary of State John Kerry, prior to entering into their negotiations for the Paris Climate discussions.

During our negotiations, as delegates from our assigned nations, we were tasked to determine:

We would then enter our negotiated commitments into the platform, and it would show us how those policies would affect climate change. The estimates it generates are based on conservative estimations, which befits the preferences of policymakers who are wary of implementing policies based on exaggerations.

And thus it began. Doing our best to follow our briefs, we began our negotiations. Despite my initial presumption that this simulation would be rather straightforward, Chinese delegates refused to define a date to begin reducing emissions — which was a stipulation of the U.S. brief. This is because in 2015 China made no commitment to reduce emissions, and only agreed to cap their emissions by 2030, at which time their emissions are projected to be greater than two and a half times that of U.S. emissions. Continuation of this policy would render further emissions reductions agreed upon in these negotiations by the U.S. useless in the fight against climate change. This fact is easily visualized by the C-ROADs simulator.

Additionally, it became clear that developing nations, which stand to be the largest producers of CO2 emissions in the future, need significant financial assistance in order to develop their countries sustainably — which involved an enormous and undesirable financial commitment from the U.S. and other developed nations. This led the delegates from developed nations to argue about who would fork over the money and made the developing nations squabble over how much money they merited.

The first round of negotiations ended in an unorganized blur. Each country announced their policy commitments and the numbers were entered into the C-ROADS platform.

Bad news. Given these policies, our climate was conservatively estimated to increase in temperature by 4 degrees Celsius (7.2 degrees Fahrenheit) by 2100. Not only did our negotiations fail, but we then entered our data into the Surging Seas mapping tool to evaluate the consequences of the corresponding sea level rise on coastal cities around the world by 2100. Goodbye Miami. Goodbye Shanghai. 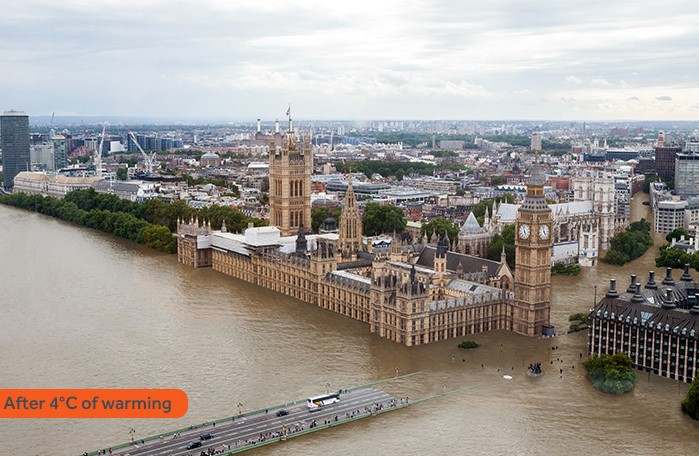 On that dire note, we began our second round of negotiations. When those still resulted in warming of 3.5 degrees Celsius (6.5 degrees Fahrenheit), we all worked together to come up with very progressive and aggressive emissions capping and reduction goals. We were very proud of ourselves even if we knew such measures were unlikely to be implemented, particularly given that Donald Trump confirmed his intention to withdraw the U.S. from the Paris Climate Agreement in November 2020. We entered our lofty goals in the C-ROADS simulator, and it still projected that the climate temperature would increase by 3 degrees Celsius (5.4 degrees Fahrenheit) by 2100. This would cause approximately:

Talk about demoralizing. I couldn’t believe how dire the situation was. The climate crisis suddenly surged to the top of my list of policy concerns. I was gutted and scared.

In the debriefing, we discussed why it was so difficult to keep warming to “well below 2 degrees Celsius” and the importance of limiting CO2 emissions as soon as possible. We also discussed actions we could take to help, from recycling to running for office.

Coming out of the experience, it was made extremely clear to all of us that profound cooperative global action was immediately necessary in order to mitigate the accumulating global climate problems as much as possible. If our world leaders continue to think only about their own nations’ interests, they are effectively choosing to end life as we know it (and don’t take my word for it — I would encourage everyone to read the executive summary of the 2017 Climate Science Special Report).

It’s natural to look at the enormity of the climate crisis and feel completely helpless and overwhelmed. There are individual changes you can make every day to lower your carbon footprint, but all and all this is a larger issue than one person can change on their own. However, there is power in numbers and in knowledge.

To this end, the executive board members of the Johns Hopkins Science Policy Group, including myself, have resolved to bring this simulation to Johns Hopkins in April 2020! If you are interested in getting involved in this initiative or learning more about how to bring the activity to your organization, contact me at thenkle1@jhmi.edu.