A Medical Student’s Reflection on the Death of RBG


Every morning when I wake up, the first thing I see after shutting off my alarm is a poster from NARAL Pro-Choice that says “trust women” in big, bold letters. What a daring concept — to trust women to make decisions about our lives, careers, families and, of course, our bodies. I’ve had this poster for almost four years, and it has moved with me to new apartments, cities, schools and different stages of my life. Why does this purple sign hold so much meaning for me? Besides being a representation of my support for NARAL, this sign is a testament to my commitment to fight for social justice and equity, and to advocate for all people. 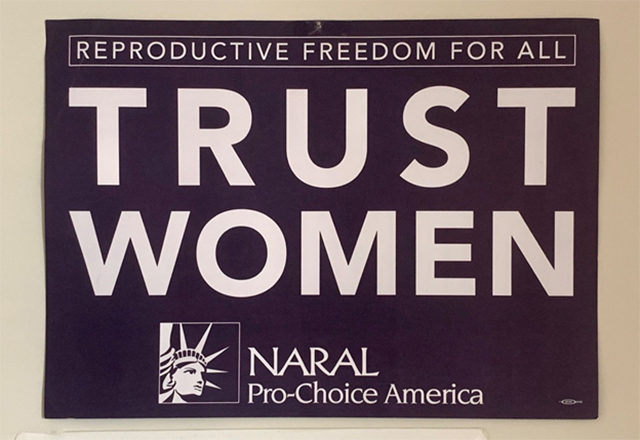 Photo courtesy of the author. Download your own graphics from NARAL here.

I held that sign during the Women’s March of 2017, the day after President Trump’s inauguration. On the morning of the march, the weather was miserable and my spirits were naturally low. But that day was one of the most memorable of my entire life — I held that sign for hours, heard from incredible voices, and walked with people from all over who were united against injustice, nationalism, tyranny, the patriarchy and much more. I felt heard and valued, emotions I have rarely felt since then. That day, I began my journey in advocacy and policy, which has led me here to the Johns Hopkins University School of Medicine. Here, I am learning to cultivate my passion for advocacy, engage with and learn from the local community, and integrate social justice and policy in my future practice as a physician.

As an activist and feminist, there are several bold women who I look to for support, guidance and strength. In 2016, there was Hillary Clinton, the original nasty woman. After her, Representative Alexandria Ocasio-Cortez, or AOC as she’s affectionately known. Representative Ilhan Omar, a Muslim woman who proudly wears a hijab and represents not only her constituents, but also so many Muslim American women like me. And so many more — Angela Davis, bell hooks, Malala Yousafzai, Jameela Jamil, Gloria Steinem, Michelle Obama and, of course, the late Supreme Court Justice Ruth Bader Ginsburg (RBG).

I’ve never met any of these women, but I feel a strong connection to them and their work. When I stare up at the glass ceiling with despair, they remind me of all that we have already accomplished, and they renew my passion and drive to continue fighting. When I feel like my voice is not heard and my opinion doesn’t matter, I turn to their voices for empowerment. They fight against injustices like systemic racism and sexism. They advocate for women’s rights and defy the stereotype of what a woman should be. As a woman in 2020, that means a great deal to me. They are beacons of light and hope, and that is especially important now.

While all these women serve as my role models and teachers, RBG stood out because of her important role as a progressive Supreme Court justice with the power to change millions of lives. When I heard the news of her passing on Friday, Sept. 18, I was devastated. I felt a rush of emotions — disbelief, grief, anger, worry. But mostly fear. It wasn’t fair to put the future of our nation and our democracy on this one, albeit amazing, 87-year-old woman. But now that she’s gone and her seat on the Supreme Court is vacant, that’s exactly what it feels like. What have we done to our nation if the death of this one woman has put so much at stake?

Her vacancy on the court is dangerous. The addition of another conservative judge to the court would tilt its ideological balance significantly to the right, with a 6-3 conservative majority. If that happens, many of our rights and freedoms will be in jeopardy. Freedom of choice and to have control over our bodies, the right to love whomever we choose, access to health care, the right to legal protection from abuse and interpersonal violence, protection from gender discrimination, separation of church and state, voting rights, immigrants’ rights, the destruction of the planet through climate change — these fundamental rights and issues could all be negatively impacted by a court with a conservative majority. That court could change the landscape of our nation for at least the next generation and endanger the progress we’ve made in the past several decades.

Losing these rights is not a distant possibility — this is an urgent threat. For example, on Nov. 4, the court will hear Fulton v. City of Philadelphia, Pennsylvania, a case that could allow private agencies that provide government services using taxpayer funding to deny services to people based on religious objection. The impetus for this case was when two agencies, including Catholic Social Services, that provide foster care services to children in Philadelphia refused to accept same-sex couples as foster parents for religious reasons. This case directly threatens the rights of LGBTQ+ individuals, but the religious objection could potentially be expanded to exclude individuals of other faiths as well. And while this case is specifically about foster care, it could have widespread impact on other government services, including food banks and homeless shelters.

As members of the Johns Hopkins Medicine community, we should all care about the passing of RBG, not just because we lost a strong, powerful woman, but because of all that her death may mean for us and our patients. Our patients’ health care is at stake. The court will hear a case on the Affordable Care Act (ACA) in mid-November — having another conservative judge on the court at this time could drastically change the fate of the ACA and thus our health care system. Despite our best efforts, we can’t take care of patients who are not taken care of by society. Systemic racism, housing insecurity, food instability, criminal injustice, police brutality, gender-based violence, discrimination — all of these societal and systemic factors negatively impact health. As long as these factors are in place, the health and well-being of our patients, especially our most vulnerable patients, is at risk.