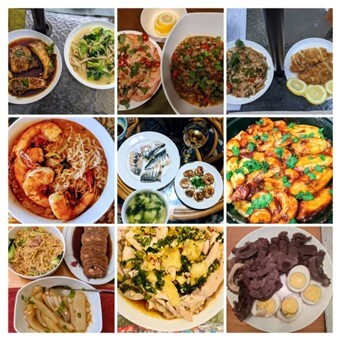 Photo courtesy of the author.

At first glance, both cooking and surgery require washing your hands beforehand and a clean and organized environment. A familiar environment, where equipment and tools are readily accessible, is a plus. Any chef and surgeon can tell you that the longest wait in the world is the time spent waiting for the right tool to arrive. Along the same lines, both chefs and surgeons despise a dull knife.

Preparation is key in both cooking and surgery. In cooking, preparation includes cleaning, chopping, slicing, marinating, boiling, and blanching. In surgery, preparation includes clipping, scrubbing, positioning, and draping. Preparation in cooking and surgery also requires knowledge and skills. Knowledge of anatomy and tissue planes are as important in preparing meat as in surgical dissection; skills generally come from practice and experience, as in “practice makes perfect”. The ancient Chinese story of the expert chef dissecting an ox, by the great philosopher Zhuangzi, should resonate with every surgeon:

When I first began cutting up oxen, all I could see was the ox itself. After three years I no longer saw the whole ox. And now I go by feel and don’t look with my eyes. I go along with the natural makeup, strike in the big hollows, guide the knife through the big openings, and following things as they are. I never touch the smallest ligament or tendon, much less a main joint. A good cook changes his knife once a year — because he cuts. A mediocre cook changes his knife once a month — because he hacks. I’ve had this knife of mine for nineteen years and I’ve cut up thousands of oxen with it, and yet the blade is as good as though it had just come from the grindstone. There are spaces between the joints, and the blade of the knife has really no thickness. If you insert what has no thickness into such spaces, then there’s plenty of room — more than enough for the blade to play about it. That’s why after nineteen years the blade of my knife is still as good as when it first came from the grindstone. However, whenever I come to a complicated place, I size up the difficulties, tell myself to watch out and be careful, keep my eyes on what I’m doing, work very slowly, and move the knife with the greatest subtlety, until — flop! the whole thing comes apart like a clod of earth crumbling to the ground. I stand there holding the knife and look all around me, completely satisfied and reluctant to move on, and then I wipe off the knife and put it away.

Similarly, the sense of fulfillment and pride in their work is shared by chefs and surgeons. There is nothing more insulting or humiliating than sending back the dish, and the same could be said for surgeons, when the patient requires a redo immediately after the initial surgery. Interestingly, for both cooking and surgery, the layman sees only what’s on the surface – a picture of the dish on the menu and the incision of the surgery. Only the chef and surgeon know what happened inside. And, the recipient of the dish or surgery either benefits or suffers from the consequences.

Like surgery, cooking is both a science and art. The science of cooking includes the organic chemistry of carbohydrate degradation, fat combustion and amino acid reactions, sometimes aided by microbiology. The art of cooking is more nuanced: from temperatures to mixing techniques; from the color to the aroma; from the ambiance to the cultural implications. The science of surgery encompasses anatomy, chemistry, physiology, microbiology, engineering and molecular biology, while the art of surgery means not only the skillful application of knowledge, but also the ability to adapt and innovate. Despite the abundance of cookbooks and cooking shows, cooking cannot be learned simply by reading books and watching videos. Neither can the science and art of surgery. The model of master and apprentice still exists in both cooking and surgery and has seen a resurgence in surgical training. Learning to cook and to operate both take years of practice, self-reflection and dedication.

Although both appear to be physical work, cooking and surgery require a tremendous amount of intellectual power. Physical skills are teachable, while the intellectual power of judgment remains elusive. For some, judgment comes from natural abilities or intuition. I would like to think of judgment as a combination of both prior experiences and the task at hand, where the final product is influenced by both. For the novice chef or surgeon, prior experience is limited to books and teachings, hence leading to questionable judgment at times. For the expert chef or surgeon, cumulative prior experiences continue to improve, and the final judgment becomes closer and closer to the truth.

The outcome of cooking and surgery are not just dependent on the chef or surgeon. Even the best chef cannot make a tasty soup from rotten vegetables. Similarly, “bad protoplasm” is a word surgeons frequently use when describing a patient with multiple comorbidities, who is at high risk of having post-operative complications. Ingredient selection is like patient selection, although the latter has much more severe consequences.

As I finish with these musings, I’m about to head to the kitchen to cook today’s case – crawfish. Suck the head and eat the tail, just like how you treat injury of the pancreas.