Chronic high blood sugar and diabetes are typically considered synonymous, but why is that the case? How is sugar, which isn’t toxic, related to a disease that affects over 29 million Americans and stands as the seventh leading cause of death in the United States?

These questions have stumped us for decades, but now a team of Johns Hopkins scientists may have found the missing piece of the puzzle. 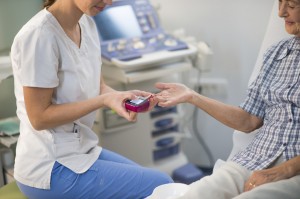 In April 2015, postdoctoral fellow Partha Banerjee, Ph.D., and co-authors published a study in Proceedings of the National Academy of Sciences that detailed their investigation into the damaging effects of high blood sugar on the body. Their work focused on the powerhouse of the cell — the mitochondria — which had been shown previously to be negatively affected by untreated diabetes. Banerjee sought to uncover the molecular basis for the observed mitochondrial dysfunction by comparing the mitochondria from hearts of diabetic and healthy rats.

Banerjee discovered a startling difference in the amounts of two key proteins present in the diseased and healthy hearts. He found that the diabetic hearts contained higher levels of an enzyme called O-linked N-acetylglucosamine (O-GlcNAc) transferase, which catalyzes the attachment of the molecule O-GlcNAc to proteins through a process called O-GlcNAcylation, and reduced levels of the enzyme that reverses this process, O-GlcNAcase. These enzymes are responsible for regulating the levels of O-GlcNAc-modified proteins in the cell, which are important for numerous cellular functions related to nutrient and energy processing.

This inefficient energy production provides the missing link to blood sugar levels. A byproduct of this process is the generation of reactive oxygen molecules, known as free radicals, which are dangerous at high levels. These charged oxygen molecules can damage DNA and cellular membranes. Our body’s defense mechanism against increased production of reactive oxygen in the mitochondria is an elevation in the amount of glucose produced by the liver.

A molecular signature of diabetes is the altered levels of O-GlcNAcylation proteins and mislocalization of O-GlcNAc transferase, which lead to the increased production of oxygen radicals that are neutralized in a process that creates glucose, thus elevating blood sugar levels.

This direct cause-and-effect cascade is now a new, viable target for treating — and potentially preventing — diabetes.