Eggs are a great source of nutrients. Eggs are too high in cholesterol.

Meat will make you strong. Meat will lead to heart disease. 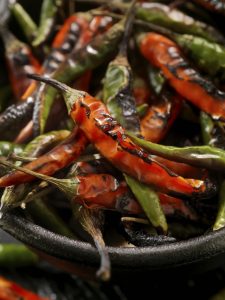 The cultural and medical messages regarding our diet are multitudinous and often contradictory. This is not surprising, given that moderation, especially when dealing with diet, is an ever-elusive virtue for many people. Instead of indicating portion-based effects, the medical establishment, with subsequent amplification through the media, will periodically and categorically praise or decry a particular food item — or sometimes entire food groups — in an attempt to achieve an overall effect of better health in the general population.

This back-and-forth often leaves individuals confused as to whether a food group is beneficial or harmful to their health. But there may be a way to ease postprandial panic — without having to shun any particular food group.

A longitudinal study recently published in The British Medical Journal found that frequent consumption of spicy foods is associated with a reduced risk of death. The cohort comprised approximately 485,000 adults from 10 different geographical regions in China who were followed between 2004 and 2013. At the outset, the participants were given a questionnaire inquiring about various sociodemographic details. such as age, education, lifestyle, and personal and family medical history. Body weight, height and blood pressure measurements were recorded throughout the study, as well as information regarding the level of daily physical activity. Most importantly for this study, the participants were also asked to document their habitual dietary intake and the frequency and type of spicy foods they ingested, e.g., fresh chili pepper or chili sauce.

Over the course of the study, trained staff members blinded to baseline information classified the deaths of any participants into one of seven categories: cancer, ischemic heart disease, cerebrovascular diseases, diabetes, respiratory diseases, infections and other causes. After controlling for variables such as gender, level of education or alcohol consumption, the researchers found that the frequency of consuming spicy foods was inversely associated with the risk of death. Specifically, the study calculated a 14 percent reduction in risk of mortality for those who consumed spicy foods six or seven days a week versus those who consumed spicy foods less than once a week.

Capsaicin, the primary ingredient in chili peppers, has a long history of anecdotal and medically applied health benefits. For example, hot pepper extracts have long been used as a folk remedy for pain. More recently, it was discovered that the mechanism of this analgesic effect is the reduction of a particular neuropeptide at the termini of specific sensory neurons. This “super” spice can sometimes seem like a panacea, with different reports lauding its benefits as an anti-inflammatory and antimicrobial, and its uses in treating obesity by suppressing appetite.

This study adds to the merits of capsaicin consumption. Though the authors note certain limitations, such as lack of comprehensive details of dietary intake, this study offers an interesting suggestion on how one can improve general health through a small, spicy dietary change.

Share This Post
CancerCapsaicinChili peppersdiabetesHeart DiseaseInfectionsMortalityPainSpicy food
« 4 Conference Networking Tips for the Novice » The Week of the Pancreas: Finding a Work-Life Balance