The Changing Face of Biomedical Ph.D. and Postdoc Education

“Night science is a sort of workshop of the possible. … ”

While we may be living in the “century of biology,” biomedical science exists in a climate where risk-taking is discouraged. That’s according to Keith Yamamoto, Ph.D., chancellor of science policy and strategy at the University of California, San Francisco. On Nov. 2, Yamamoto gave a talk titled “Nextgen Biomedical PhD and Postdoc Education” as part of the Johns Hopkins University School of Medicine Postdoctoral Affairs Lecture Series. In quoting the French biologist François Jacob, Yamamoto spoke of the virtues of “night science,” the line of scientific inquiry that “stumbles, recoils, sweats, wakes with a start.” This type of science is the risky kind, creating the pioneering knowledge that pushes science to new frontiers — but remains a hard sell to funding agencies that favor guaranteed results. 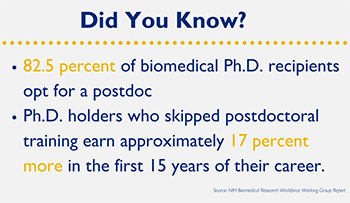 Further reducing the excitement of young scientists are the statistics on NIH funding: Only 4 percent of the NIH awards go to new investigators, and biomedical postdocs who eventually transition out of academia earn approximately 17 percent less over the first 15 years of their career compared to Ph.D. degree holders who skipped the postdoctoral training, according to the report. These factors have, in part, created an environment of hypercompetition that disincentivizes the high-risk research that has the potential to build new scientific foundations in the pursuit of knowledge.

During his talk, Yamamoto tackled some of these issues by discussing problems and solutions in graduate and postdoctoral training. He emphasized the importance of incorporating training about diverse career paths into the graduate school curriculum so that trainees can plan and enter their careers without doing unnecessary postdoctoral fellowships. Currently, 82.5 percent of biomedical Ph.D. recipients opt for a postdoc, making postdoctoral training their default career option regardless of their intent to ultimately pursue an academic career in research.  Yamamoto argued that moving the hub of career development training from the postdoctoral level to the graduate school level would enable graduate students to make better career choices earlier. This would also help avoid the income loss that postdocs who transition out of academia face early in their career, and it would maintain the integrity of postdoctoral training as the dedicated training track for academic research careers. The overall result would be to reduce the number of postdoctoral researchers and relieve the competition for fellowship funding and academic faculty positions. These changes would create a climate that rewards — or at least doesn’t destroy — creative thinking, and would empower young scientists with the courage to follow their night science dreams.