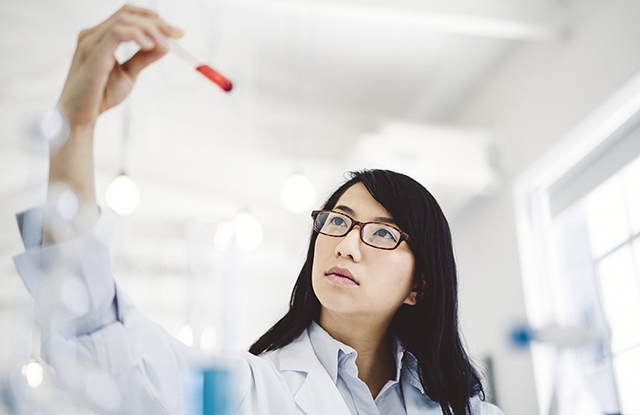 A patient develops symptoms that cannot be explained. The doctor orders a myriad of tests to discern the cause. If cancer is suspected, the patient may go through a painful and sometimes invasive biopsy procedure to sample the tissue in question. But what if a simple blood draw could be used instead?

This is the concept of a liquid biopsy, a holy grail that scientists have been trying to develop. A patient’s blood is drawn and analyzed for DNA shed by dying tumor cells. This tumor DNA may have known mutations associated with cancer. Although current tests offer a way for doctors to follow disease progression and determine whether a current therapy is working, the gold standard would be a liquid biopsy in which cancer can be detected before diagnosis. However, in early stage cancer, tumor DNA in the blood is minimal. In 1 milliliter of plasma, there may be only one mutant DNA molecule. Previous tests have not been sensitive enough to detect this rare event. There has also been no way to determine the tissue of origin for the tumor when analyzing tumor DNA alone. This creates a myriad of problems if tumor DNA is detected, but the location is unknown, resulting in the costly burden of more extensive screening and tests.

However, a liquid biopsy test — CancerSEEK — developed by researchers at the Johns Hopkins Sidney Kimmel Cancer Center, aims to solve the problem of early cancer detection. CancerSEEK tests for 16 different genetic mutations found commonly in cancer and eight proteins differentially expressed in specific tumor types. In a preliminary trial of the test, they examined over 1,000 people already diagnosed with one of eight types of cancers that had not spread from the site of origin: breast, colorectal, esophageal, liver, lung, ovarian, pancreatic and stomach.

CancerSEEK is unique in that it simultaneously tests for eight cancers instead of one, all eight of which have no current blood tests in use for early detection. In the preliminary trial, CancerSEEK was able to detect 70 percent of the patients’ cancers and, additionally, was able to narrow the location of the tumor to two organ sites approximately 80 percent of the time. The false positive rate, or how often the test was positive for cancer in a healthy person, was low, at less than 1 percent. The test would also be relatively inexpensive, at an estimated $500, putting the cost in the range of other common screening tests, such as colonoscopy. There is still work to be done, however, before this test may reach its desired clinical utility. The test is intended to be used for early cancer detection, but as small tumors shed significantly less DNA than larger tumors, the test showed the ability to detect cancer in only 43 percent of stage 1 cases, compared to detection of 78 percent of stage 3 cases. The ability to detect the cancer also varied based upon type, with ovarian cancers being detected 98 percent of the time, while breast cancers were only detected 33 percent of the time. While the false positive rate was low, there is concern that it may be higher in the general population, as anyone with inflammatory diseases was excluded in the study. People who do not have cancer may have inflammatory diseases, such as arthritis, allergies or hepatitis, which can change the protein levels that the test studies and potentially alter results. Any resulting false positive can cause stress and unnecessary further testing and treatments.

CancerSEEK has raised the bar on expectations for liquid biopsies in the future. However there is still more rigorous testing to be done. The next step for CancerSEEK will be a $50 million, five-year study of 50,000 older women with no history of cancer. This blood test, and others that will undoubtedly follow, have the promise of changing how cancer detection is done, moving toward noninvasive measures that may be more sensitive than our current methodologies.