Stepping into the Anne and Mike Armstrong Medical Education Building (AMEB), you can always count on Aisha to brighten your day. Born and raised in Baltimore, Aisha has worked at Johns Hopkins since 2009, and recently changed positions from security first class officer to interim administrative assistant.

Everybody knows and loves Aisha, who greets each person entering AMEB with a smile and a wave, and has countless friends among the students, graduates, teachers and other staff members at the school. What many do not know about Aisha is her evolving artistic gift, which I have been fortunate to witness as I’ve come to know Aisha during my time at Hopkins.

It all started with a fun “girls’ night.” About three years ago, Aisha and a group of her girlfriends took a night off from their busy work and mothering schedules to try out one of the newly popular “paint and sip” events in Baltimore. These nights of social art classes and wine have recently become a big hit in many cities. However, they don’t often produce professional artists.

As a kid, Aisha always loved coloring books and sketching, but never thought to carry her passion for art into adulthood. She describes her childhood art experiences as “something to do in those bored moments. I wouldn’t even call it a hobby.” The paint and sip was the first time she painted freehand on canvas, and she loved it immediately. She even joked with some of the women running the event that she would return with her own set of paintbrushes.

And that’s exactly what she did. Two months later, Aisha took her husband to a paint and sip for his birthday, and this time she brought her own array of tools.

What followed, she says, is simple: “Since then, I really fell in love with painting.”

Aisha began painting whenever she had a chance. At the time, she was working, raising two active kids and taking paralegal classes. Her schedule often grew stressful, but she says painting helped “clear her head” when life became overwhelming. 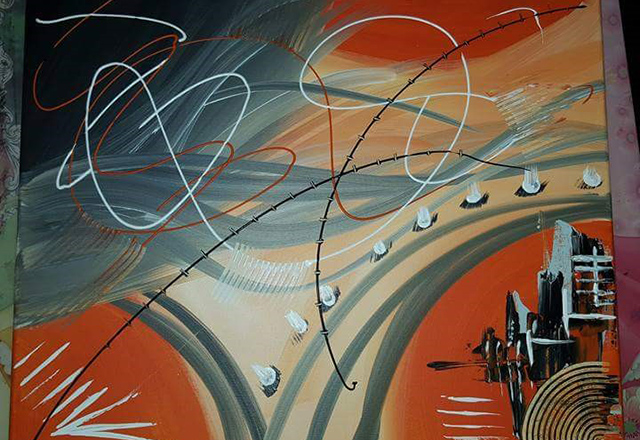 The first painting that Aisha sold.

Soon, people began noticing Aisha’s talent. Aisha gave one of her paintings to Nick, a 2017 graduate of the Johns Hopkins University School of Medicine, and another to Alex, one of his classmates. When she offered to give a painting to Jasmine, another student, Jasmine replied, “I’m willing to buy that!”

And so Aisha sold her first painting. And then came her first art show. In the fall of 2016, she participated in a private show on Greenmount Avenue. Medical students came. “I was blown away by the amount of support I was getting from the student body,” she says. “It was an amazing feeling.”

Her supervisor at Johns Hopkins was also very encouraging, something “you don’t find often in a workplace,” she says. He encouraged her to sign up for her second show, the annual art show at the Miller Research Building on the Johns Hopkins Hospital campus. Aisha says she has also received constant support from her husband, Eric. “He has been there cultivating my gift since day one,” she says.

A few months later, Aisha participated in her first public art show, at Power Plant Live. To enter this show, she was required to sell 20 tickets, which she did easily.

Since then, Aisha has sold over 14 pieces, and has started a small business planning private art parties.

She finds inspiration from the paintings of Ryan Beckley, whose work she first saw on YouTube. When starting a new piece, Aisha simply stares at the canvas for a while, then eventually puts a few “globs” of paint on it, and finally “lets the brush do the work.” She never names her pieces, because she wants the people who buy the art to name it themselves. “What I see in mine, you might see something totally different. Through conversation, I learn more about my pieces by what someone else saw,” she says.

Aisha remains busy with her job and raising her 9- and 11-year-old honor-student son and daughter, who are involved in numerous extracurricular activities. Though “life has taken over” for the moment and she is not able to paint as much, Aisha still maintains her artwork. She has thrown four private painting parties, and is learning calligraphy with the goal of incorporating quotes into her paintings.

Johns Hopkins has countless brilliant, successful people who have excelled in their talents. Aisha is one of them. Regardless of where Aisha’s career takes her, her passion, humility and pure love for what she does are qualities that everybody should strive to emulate.