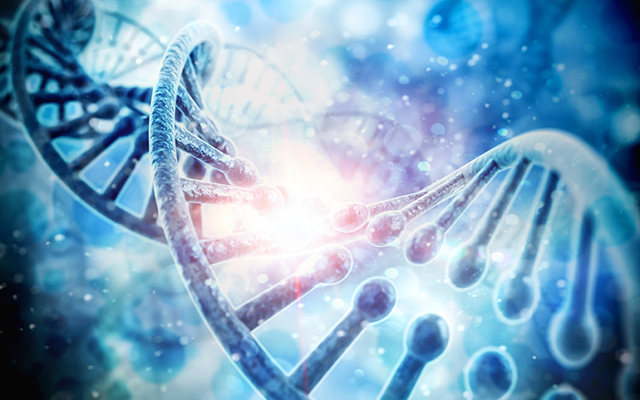 DNA serves as a blueprint for the protein repertoire that comprises the human body and its functions. To construct these proteins while also ensuring that its DNA remains safely tucked away in the nucleus, the cell generates disposable and short-lived copies of its active genes, called messenger RNA (mRNA). An array of molecular machines then synthesize proteins based on the specifications of mRNA sequences. Interestingly, the cell can intercept these mRNA intermediaries through an aptly named process known as RNA interference (RNAi).

First described in a 1998 paper — for which its authors, Andrew Fire and Craig Mello, won the 2006 Nobel Prize in Physiology and Medicine — RNAi begins with the slicing of double-stranded RNA into smaller double-stranded fragments. These fragments are then bound to a protein complex called RISC, which sheds one of the strands and uses the other strand as a guide to selectively bind and degrade complementary mRNA. Consequently, RNAi is an effective way of chopping up mRNAs that carry a specific sequence, thereby blocking the production of certain proteins. 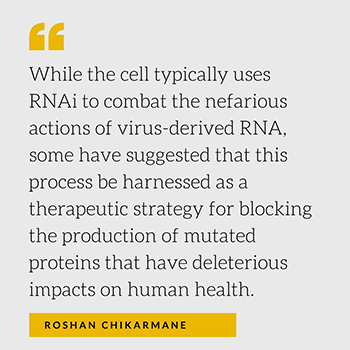 While the cell typically uses RNAi to combat the nefarious actions of virus-derived RNA, some have suggested that the intrinsic process be harnessed as a therapeutic strategy for blocking the production of mutated proteins that have deleterious impacts on human health. Consider the case of hereditary transthyretin-mediated amyloidosis (hATTR), a disease that afflicts approximately 50,000 people globally and is principally caused by toxic protein deposits. These pathogenic deposits, composed of mutant transthyretin (TTR) protein, induce significant nerve damage in the heart and various other muscle groups (collectively called polyneuropathy). Patients reportedly have a life expectancy of two and a half to 15 years from the time that symptoms first manifest, yet no forms of treatment currently exist in the U.S.

Scientists at Alnylam Pharmaceuticals, a biopharmaceutical company based in Massachusetts, hope to develop the first commercially available therapy that uses an RNAi-based strategy, which they’ve named patisiran. The treatment consists of double-stranded RNA fragments, which correspond to the mutant TTR mRNA sequence, encapsulated in nanoparticles, which allow the RNA fragments to be readily soaked up by cells. On Sept. 20, 2017, the company announced that its APOLLO Phase 3 study, in which 150 hATTR patients with polyneuropathy were treated with patisiran, met all primary and secondary endpoints. Endpoints, with respect to clinical trials, are objective measures used to determine whether or not a given intervention worked as intended. Primary endpoints are measurements that a given clinical trial is specifically designed to determine and can be contextualized with supplemental measures, known as secondary endpoints. After an 18-month course of tri-weekly administration, the patisiran group showed significantly lower neuropathy impairment (primary endpoint) with improved quality of life (secondary endpoint) and improved muscle strength (secondary endpoint).

Alnylam Pharmaceuticals is awaiting a decision for Food and Drug Administration approval by Aug. 18, 2018. If approved, patisiran will set several precedents. It will demonstrate the ability of RNAi-based therapies to achieve regulatory success — a major first. In addition, it will represent a therapeutic strategy that may be appropriately applied in various other disease contexts that currently lack treatment options. The journey of RNAi — from its first report in early 1998 to the clinical validation of patisiran as a treatment option for hATTR in late 2017 — illustrates a final point. Our ever-growing understanding of how various biological systems work can be used to develop novel interventions that, ultimately, improve the human condition.