Recent Study Reveals How the Brain Learns from Others’ Mistakes

Last month, my friend came back from Mount Kosciuszko with stunning photos and a seriously painful-looking sunburn. As I prepared to undertake the same hike based upon his enthusiastic recommendation, I decided to pack some SPF 50 and planned to reapply every 30 minutes. Without experiencing a sunburn firsthand, I knew to stay sun-safe, thanks to the brain’s innate ability to learn very effectively by watching others — a phenomenon called observational learning.

Observational learning offers a great evolutionary advantage, and is highly conserved in other animals. Studies have shown that animals become anxious just by watching others of the same species going through shock or pain. Interestingly, the ability to learn from others’ experiences becomes impaired in socially isolated animals — a hint that observational learning may intimately relate to the ability to empathize, or to detect social signals. 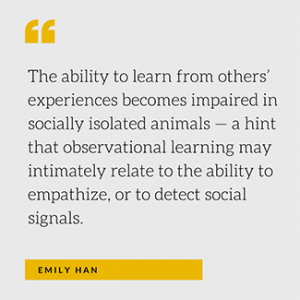 This phenomenon was recently explored by a team of neuroscientists at the Massachusetts Institute of Technology who were interested in defining and understanding the regions of the brain responsible for observational learning. They knew from previous studies that if a neutral predictive cue — such as a light or a tone — repeatedly co-occurs with something dreadful, an animal would learn to fear the light or the tone. But, they asked, what if the dreadful event didn’t happen to the animal itself, but instead another animal it knew?

The researchers set up an experiment in which a mouse observed a mouse that it shared a cage with repeatedly experience electrical shock after a predictive cue. Soon, the observer mouse became fearful of the predictive cue, and this fear is long lasting. They noted that the signal left a particularly persisting impression for observer mice that had previously been exposed to a shock and were familiar with the sensation.

Meanwhile, the researchers monitored which regions of the animals’ brains responded during this observational learning experience. They found that the direct communication between two regions of the observer’s brain specifically is critical for observational learning. One region is the anterior cingulate cortex (ACC), an area responsive to social information; the other is the basolateral amygdala (BLA), an area involved in processing emotion. When the researchers artificially stopped ACC from talking to BLA, the observer mouse failed to learn. Although ACC and BLA are both profusely connected with many other brain regions, it was the specific connection between them that really mattered.

Based on these results, the study authors believe that as the observer watched another mouse receiving shock after cue, shock after cue, a population of its ACC neurons quickly picked up on the cue-shock association, akin to when I picked up on my friend’s painful sunburn after hiking. ACC neurons directly communicated this information to the BLA neurons, which then stored this association as an emotional memory. This is when the observer became afraid of the cue, despite never experiencing the shock firsthand, like when I internalized the association between hiking and sunburn to inform my future action of putting on sunscreen when I hike.

As elegantly demonstrated in this paper, being able to take interest in the experience of others and register its meaning is critical for learning from others’ experience and avoiding their mistakes ourselves. It provides such important survival advantage that scientists are hopeful that this circuit is evolutionarily conserved in many species of animals. New animal models of social cognition would shed light on many neuropsychiatric conditions, such as autism and social anxiety.