The Interplay of Hormones and Infectious Diseases: How Our Sex Can Impact Our Risk of Getting the Flu 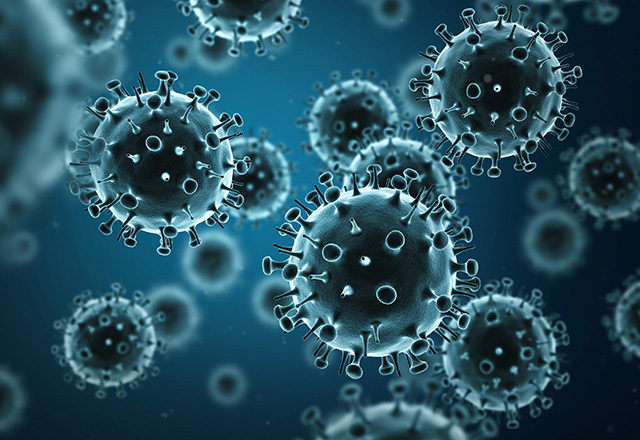 With the long days of summer well behind us, and crunchy leaves and cool temperatures beckoning us forward, we all have to prepare for winter in our own ways. For most, hopefully, that includes getting a flu vaccine! The vaccine is an important tool in our arsenal against influenza, but unfortunately, it is not sufficient as our only weapon. We also need to understand the factors contributing to severe flu infections and how to best manage prevention and care. One of the factors is hormones. Though the presence of our natural hormones is largely out of our control, enhancing our understanding of them can improve flu care. Researchers at Johns Hopkins recently reviewed the role of sex hormones in flu infections. They examined hormone variations over the lifetime of a person, and their results emphasized that sex should be considered in research and treatment of flu infections.

The first cases of influenza infections of 2018 are rolling in, and some groups are more at risk for severe infections than others. Young children, the elderly, any people who have a weakened immune system, and those with conditions such as asthma or HIV/AIDS are at heightened risk for both severe flu and secondary infections. In the 2017–2018 influenza season, over 30,000 hospitalizations were attributed to the flu, with people under age 5 and over 65 shouldering much of the burden. Of the children that died from the flu, approximately 80 percent were not vaccinated, emphasizing the importance of timely flu vaccination in at-risk groups. Among these at-risk groups, males seem to have worse outcomes during a normal flu season. This is not the “man flu” — instead it reflects, as Hopkins researchers Sabra Klein and Landon vom Steeg assert, the effects of sex steroids on influenza infection. Nevertheless, these factors are rarely considered during epidemiologic or clinical studies, and Klein and Vom Steeg make an argument to change this. 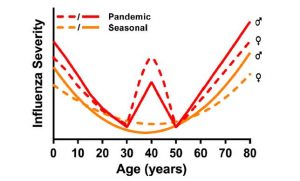 It has been well established that sex can influence disease burden, not only through behavioral factors but also through immune and hormonal elements unique to each sex. This holds true for the flu — Klein and Vom Steeg previously demonstrated the unique immune responses to influenza virus in each sex. In general, females of reproductive age tend to have a better immune response to the flu. Seasonal influenza is often caused by the influenza A virus (IAV), which is typically the most virulent — or capable of causing severe disease — of the three groups (A, B and C) of influenza virus that can cause human infections. Few studies have examined the interplay of sex, age and the flu, but those that have taken this into account show that prepubescent boys appear to have more severe infections than girls in the same age group. However, between puberty and menopause, this observation flips, and females appear to have more severe infections. In older patients, we again see more severe infections in males than females.

Klein and Vom Steeg elaborate that much of the epidemiologic data collected from flu outbreaks tend to omit sex and stratify only by age group. This causes us to miss associations of sex and flu outcomes. Canada has begun to record sex differences in flu burden, which has allowed greater insight into comorbidities of flu infection in each sex. For instance, in the 2009 H1N1 epidemic, Canadian data showed that females were more likely to be hospitalized during flu infection, but this was strongly associated with comorbid diseases such as asthma. In the U.S. and Japan during that time, females were also more likely to be hospitalized, though the exact comorbidities are unknown. We can conclude that at the very least, researchers, clinicians and the public would benefit if influenza burdens were stratified by sex.

As previously noted, men bear much of the burden of influenza infection among people over 65 years old. The authors explain that this is due, in part, to reduced control of IAV replication. However, no studies to date have examined the impact of age and sex on this reversal between men and women, highlighting yet another gap in research centered around omission of the sex variable in most current studies.

So how exactly does sex impact influenza infections? Our hormones appear to play a large role in the immune response to infection, which nicely matches the trends we see with age and sex. Estrogen, which is higher in reproductive-age females than males, appears to be protective against the systemic inflammation associated with influenza infection. Of the estrogens, 17-βestradiol (E2) has been shown to recruit immune cells that manage inflammation and to reduce inflammatory responses that could damage tissues. However, while some anti-inflammatory effects can be helpful in the healing process, E2 has been shown to be so anti-inflammatory that it can actually impair the initial immune response to influenza. Therefore, it can increase the severity of flu infections in female mice. In contrast, estriol (E3) is an estrogen shown to reduce inflammation without interfering with the antiviral response in mice. There must be a fine balance, then, of estrogen levels during flu infection to reduce inflammation without inhibiting the immune response.

Progestins are another group of hormones that are higher in females than males, and these also are protective during IAV infection. One progestin, P4, not only reduces inflammation but also increases immune responses associated with tissue repair. This works well for a first-time infection, but upon another infection, mice treated with P4 seem to have impaired T cell responses and lower levels of antibodies against IAV. Thus, similar to the estrogens, progestins — on a superficial level — are protective in fighting inflammation and infection, yet research shows that their effects are not so simple and that they can have a secondary harmful effect.

A third group of hormones, androgens, are typically higher in males than females. Examples of androgens are testosterone and dihydrotestosterone. Research shows that low androgen levels correlate with more severe infections. Specifically, when low levels of testosterone and dihydrotestosterone are induced in male mice from either old age or castration, the mice display higher levels of inflammation and no control of virus replication. Further studies have substantiated the finding that androgens help mediate inflammation but have no effect on controlling virus replication when the infection passes from low level to lethal influenza. In other words, androgens help the immune system during a normal, low level infection, but have little impact once the infection is too high or if a virus is particularly virulent.

Clearly, sex impacts influenza pathogenesis through many different hormones and complex immune responses. The authors use this data to argue that sex should be considered in further research studies to better understand influenza pathogenesis, and when tailoring treatment for different patients. Further care should be taken to record use of hormonal supplements (such as birth control pills) that may impact hormone levels and, consequently, influenza infection. While research has demonstrated the roles of hormones in IAV infection, further investigation of other sex hormones and age would improve our understanding of IAV etiology, risk stratification and potential treatment options.