Thinking Outside the Brain 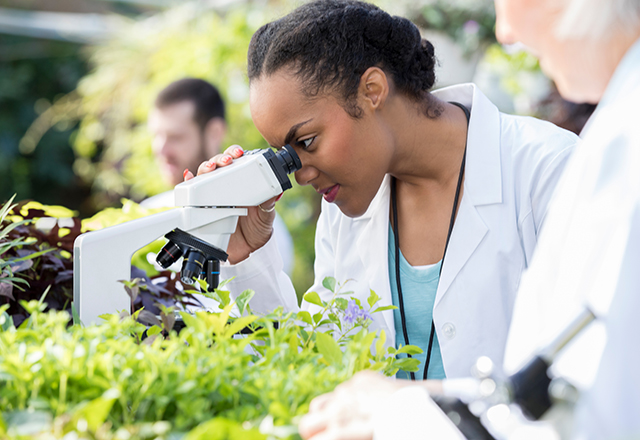 Genetics began in the garden — Mendel’s pea experiments revolutionized and developed the field and principles we know and study today. Similarly, my scientific journey began with plants. In college, I studied the model organism Chlamydomonas reinhardtii, which is unique in its ability to thrive in total darkness, whereas most plants rely on photosynthesis. My career goals were medically driven, and I knew I wanted to pursue biomedical research. I often found myself wondering how my work with Chlamydomonas reinhardtii would enable a biomedical discovery — it seemed so far-fetched and so distant from human disease.

In the September issue of Science, a group of scientists from the University of Wisconsin-Madison and Saitama University in Japan demonstrated the valuable information that can be gained using plants as model organisms, by identifying and describing a nervous system-like signaling system that is part of the plant defense response.

Imagine you are the Arabidopsis plant, open and exposed to the world: insects, weather changes and predators. Sitting stationary in this vulnerable state, how do you protect yourself and your neighbors? Plants rely on a different means of protection and communication, mediated through production of the hormone jasmonic acid. Although plants do not have a nervous system, studies have shown that they are capable of generating electrical impulses, thereby enabling communication leaves within the same plant.

In the recent work published by Masatsugu Toyota and colleagues, the authors detailed how the Arabidopsis plant transmits these electrical signals through a receptor system similar to those found in the mammalian nervous system. This class of receptors, glutamate-like receptors, can bind several amino acids, but in this study, the authors showed that the binding of glutamate to these receptors is specifically responsible for initiating and propagating the damage response, similar to the way glutamate triggers neurological signaling cascades in the mammalian nervous system. This specificity for glutamate aligns with the neurological function of glutamate receptors, and therefore provides an exciting mechanism by which similar receptors function outside the nervous system. The signaling cascade is mediated by changes in cytosolic calcium, which occur upon ligand binding in response to injury.

Because the electrical signal propagation occurs via calcium flux, the scientists used a calcium indicator, GCaMP3, to watch the Arabidopsis plant communicating with neighboring leaves in real time as it responded to danger signals — which were modeled by caterpillar feeding and the resultant mechanical disruption of the leaf. In neurons, signals are propagated across the axon through changes in ion flux across the membrane, and eventually are released into a space residing near the target neuron, referred to as the synapse. Similarly, in this study, the authors showed that the spread of the calcium signal is via the plasmodesmata, which is a series of microchannels that traverse the plant cell wall, enabling molecules to move back and forth. Therefore, the plasmodesmata could be thought of as the “plant synapse.” Though, in the case of neurons, the signals are fast-acting across a very short distance; in this study, the authors observed a long-distance, endocrine mode of action.

Taken together, these pieces of evidence suggested that plants may be capable of communicating by transmitting information using electrical signals, similar to the way neurons communicate to one another in the brain. This alludes to a primitive nervous system, which enables an exciting avenue for exploration for both neuroscientists and plant biologists.

Beyond the exciting finding of nervous system-like signaling in plants, the paper also features beautiful images and fascinating live movies of the authors’ findings, detailing the power of live imaging and the advantage of using plants as a model organism. Mendel studied pea plants to understand heritability and the foundation of genetics; similarly, perhaps we can use plants to answer remaining unknown questions that we have yet to solve with mammalian model organisms.