Are llamas the Key to Curing the Flu?

Influenza kills up to 646,000 people worldwide each year. While we have all heard about the importance of receiving the annual flu vaccine, it reduces the risk of illness by approximately 60 percent at best. Last year, during one of the deadliest flu seasons in recent memory, the vaccine was only about 40 percent effective.

The first influenza vaccine was approved just after World War II. With all the advances in biomedical science since then, why is the vaccine’s effectiveness still so low? And why do we still have to get poked with a needle every single year to gain only partial protection? 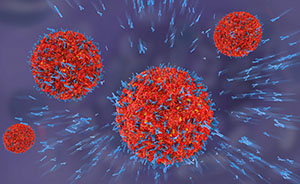 As a reminder, influenza immunization works by stimulating the body’s immune system to make antibodies against three strains of the flu virus. These antibodies target a viral surface glycoprotein called hemagglutinin. This protein coats the outer surface of the virus in an array of spikes, which allow the virus to attach and infect cells with a target called sialic acid, present in the respiratory tract and on red blood cells.

Unfortunately, each flu strain has a different variation of spikes, and these spikes can change rapidly from year to year through mutation. Currently, scientists look to the circulating flu strains in the opposite hemisphere as a guide to predict which strains will be most prolific during the coming winter. These strains are then selected as the basis for the trivalent vaccine. Sometimes, as was the case last year, the prediction is not very accurate.

Given these challenges, the holy grail for flu prevention is a long-lasting, highly effective and nearly universal vaccine. Fortunately, significant progress is being made toward this dream, thanks to an international team of creative scientists and the biology of llamas. That’s right: llamas!

In a study published in Science in early November, a team led by scientists from the Scripps Research Institute reported “the use of diverse camelid single-domain antibodies to influenza virus hemagglutinin to generate multidomain antibodies with impressive breadth and potency.”

Essentially, the scientists isolated a set of llama antibodies and then created a gene that manufactured four of these antibodies as a single mega-antibody. To test this “multidomain antibody,” investigators loaded the gene into a harmless adenovirus, which was sprayed into the noses of mice. The virus slipped into nasal cells where it stimulated the cells to create the mega-antibody.

Next, they sprayed high doses of dangerous flu viruses into the noses of the mice. They tested 60 flu strains, both influenza types A and B. In all but one case (a type of bird flu never known to infect humans), the engineered antibody offered complete protection against the flu, grabbing onto the viruses and preventing them from multiplying.

The experiment was based in part on the previous observation that sometimes individuals produce a rare antibody against a wider range of flu strains, a so-called “broadly neutralizing antibody.” These antibodies typically latch onto parts of the flu virus that mutate less rapidly than the hemagglutinin spikes. Link four of these together, and the result is a potential treatment “with impressive breadth and potency.”

The reason llamas were the animals of choice was entirely practical. Llamas and related mammals have evolved to make small antibodies. Smaller antibodies are both easier to string together into a mega-antibody and more able to latch onto different, less variable parts of the flu virus surface (by sneaking under the tips of the highly variable spikes, for example).

Another clever strategy in this study was the use of a disabled virus (sometimes called a viral vector) to deliver the neutralizing antibody. Rather than relying on a person’s own immune response to generate antibodies, which is how the vast majority of vaccines stimulate protection, the engineered antibody gene can be delivered directly into nasal cells and manufactured there. This could be beneficial for elderly or immunocompromised patients, who may not have a sufficiently robust immune response to generate protection from a vaccine.

Of course, a successful study in mice does not guarantee success in humans. Human immune systems could recognize the llama mega-antibody as foreign and attack it, rendering it useless. Further development followed by clinical trials will be necessary to establish safety, efficacy, dosing and more.

Regardless of the future work that awaits, this landmark study is an important step toward a more broadly effective, durable flu vaccine.