Partnering Toward Discovery: A Focus on Inclusion Body Myositis

Many people are not familiar with a rare disease called inclusion body myositis (IBM). Most have never heard of it.

On Jan. 22, 2019, Harry Benjamin Larman and students Janelle Montagne, Sahana Jayaraman and Kyla Britson presented their clinical and basic science research on IBM at the first event in this year’s Partnering Toward Discovery (PTD) lecture series, which is designed to bring together Johns Hopkins graduate and medical students to catalyze translational research conversations. (Read more about this series in the blog post Partnering Toward Discovery: Behind the Scenes.) The main topics were immunology and skeletal muscle. Speakers focused on how they’re working together to advance the understanding of IBM and developing a new animal model for this disease.

What is IBM and what causes it?

Inclusion body myositis is a disease characterized by inflammation of the muscles, accompanied by progressive muscle weakness and wasting. Muscles affected usually include those of the wrists and fingers and the muscles at the front of the thigh. The muscles that lift the front of the foot are sometimes impaired as well.

Patients suffering from IBM tend to present with initiation of symptoms after age 50, although some may develop symptoms as early as their 30s. Sahana Jayaraman kicked off the meeting by discussing a clinical IBM case and some of the typical symptoms that IBM patients encounter:

As you can imagine, these symptoms are not exclusive to IBM, which may lead to misdiagnosis of patients who have many other diseases. Therefore, people presenting any of the above symptoms should be tested and evaluated by physicians who specialize in muscle diseases, physicians such as the medical staff members at the Johns Hopkins Myositis Center.

Breaking down the name of the disease — inclusion body myositis — allows you to understand what “myositis” means. The root word “myo” signifies “muscle” while “itis” means “inflammation.” Put together, “myositis” refers to an inflammatory muscle disease. Although these two elements — inflammation and muscle degeneration — are present in IBM, it is unknown which feature causes the disease.

“Considering how terrible scientists are at naming basically everything, I love that the name IBM encompasses two pathological hallmarks of the disease and hits on the controversy underlying the pathogenesis,” said Kyla Britson, a fourth-year Ph.D. student in the lab of Tom Lloyd and one of the speakers at the PTD event. She further explained: “The words ‘inclusion body’ refer to the presence of protein aggregates, and ‘myositis’ refers to the auto-aggressive inflammatory cells present in the muscle. Scientists don’t understand yet how these two features drive the development of IBM, and if it is primarily a degenerative disease or primarily an autoimmune disease.”

How are Johns Hopkins scientists and clinicians advancing the field of IBM research?

One of the biggest problems in current IBM research is that the pathological mechanism(s) driving development of this disease is not understood. Moreover, there are currently no nonhuman models of IBM disease.

Britson has started to develop a mouse model of IBM in which a piece of muscle from an IBM patient (muscle biopsy) is surgically transplanted onto the leg of a mouse that has an impaired immune system. The mouse was bred to have a faulty immune system so it can be “humanized” by engrafting patient-derived tissue with high efficiency. The process of taking a piece of muscle tissue from a human and transplanting it to a mouse (a different species) is known as a xenograft. Britson is using xenografts to replicate or model human IBM disease. (Figure 1 depicts the xenograft process.) 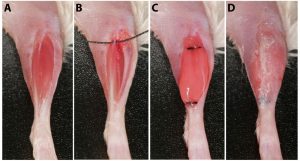 Figure 1. The surgical procedure of a xenograft, in which human muscle is transplanted to the leg(s) of a mouse. (A) After removing the hair on the moue’s lower leg, an incision is made. (B) The graft site is created by completely removing the mouse’s tibialis anterior and extensor digitorum longus muscles. Sutures (shown proximally with black thread) are looped around the peroneus longus tendons. (C) Human muscle tissue is implanted into the site and tied to the proximal and distal tendons of peroneus longus muscle. (D) The skin over the graft site is closed with surgical glue and later stapled.

“One of the key advantages of the xenograft approach is that it features the complex genetic and epigenetic abnormalities that exist in human disease that may not be reproducible in other animal models,” Britson said. “We also hypothesize that the xenograft response to drugs is more likely to translate to patients.”

Using this new model, Britson has seen that some of the pathological characteristics present in IBM patients — increase in markers of muscle degeneration and autoimmunity — are replicated in her xenograft model. For example, xenografted mice showed high levels of p62, a protein that targets specific cargoes for degradation and is a sensitive marker of the protein aggregates that form in IBM. Muscle inflammation and upregulation of MHC-1 (major histocompatibility complex) distinguish IBM patients from those with other muscle disorders with muscle degeneration, and Britson’s xenograft model detected both features. In addition, she saw that xenografted mice have high levels of cytotoxic T cells, monocytes and B cells as detected by immunostaining. Interestingly, the number of T cells present in the xenografted mice was inversely related to the regenerated fibers in the xenograft. These exciting results lead to new questions about the relationship between the immune system and muscle regeneration in the context of IBM.

If this novel mouse model of IBM eventually proves to be effective, it will hopefully allow researchers to carry out mechanistic studies that will further advance the understanding of IBM pathogenesis.

“If we can settle the debate of degeneration versus autoimmunity in IBM, it will inform researchers and clinicians about what path to pursue to develop therapies,” Britson explained. “If the underlying cause is autoimmunity, the field should focus on developing and testing better immunosuppressive agents and diagnosing and treating patients earlier. On the other hand, if the inflammation is secondary to a primary myodegenerative process, the field should focus efforts on developing therapies targeted to features of degeneration, such as disrupted proteostasis, autophagy and amyloid accumulation.”

To better understand what kind of immune receptor repertoire is responsible for causing the immune system phenotype seen in Britson’s xenografted mice, Ben Larman and Janelle Montagne have developed a T-cell receptor sequencing method called FR3AK-seq (Framework Region 3 AmplifiKation sequencing). T-cell receptor sequencing allows researchers to cut the DNA of T-cell receptor genes into short fragments that can then be brought together or “sequenced” by using computers to match the fragments to each other. This DNA fragment matching process helps characterize each T-cell receptor gene, facilitating immune repertoire analysis. Some preliminary sequencing results showed that the T-cell receptor repertoire present in some (but not all) biopsy samples from IBM patients was highly similar to that of the xenografted mice. This suggests that there are important resemblances in the immune response between human IBM and the IBM mouse model.

It is an exciting time for IBM research. Development of new mouse models for this disease along with creation of the right tools to examine such humanized mouse models are slowly removing barriers in IBM research. “Overall, I think the field is developing tools — like our xenograft model and Janelle’s T-cell receptor sequencing approach — that will allow us to finally examine IBM mechanistically,” said Britson. Hopefully, in the upcoming years, we will see this hard work begin to translate to improved diagnostic and therapeutic measures for humans with IBM.

« Forbes 30 Under 30: Meet 3 School of Medicine Honorees » Student Perspectives: All About Grad School