This post discusses topics related to mental health (e.g., depression, suicide) that may be sensitive or triggering for some individuals. Support is available through the resources provided at the bottom of this page.

A 2016 meta-analysis published in JAMA found that among medical students worldwide, the prevalence of depression or depressive symptoms was 27% — nearly five times higher than the general population.1 Almost half of resident physicians report burnout, including 36% who endorse symptoms of emotional exhaustion at least weekly.2 One doctor commits suicide in the United States every day, the highest among any profession and more than twice the rate found in the general population.3 The reality is clear: Students, trainees and physicians are suffering from the rigors of medical education and practice, and they need help.

Despite the clear need for it, help is often not obtained. An online survey of over 2,100 physicians found that half of respondents believed they had met the criteria for mental illness but had not sought treatment because of lack of time, fear of reporting to a medical licensing board, belief in one’s own capabilities, or concern about shame and embarrassment.4 Other barriers to seeking help among distressed medical students include failure to recognize that a problem exists, fear of stigmatization, and negative perceptions about their schools’ support for their mental health needs.5

Fortunately, efforts to normalize mental health ailments and the need to improve resources for medical professionals and students are increasingly being recognized. In March 2019, for instance, the Harvard Global Health Institute proposed practical solutions to improve physician well-being in a report titled, “A Crisis in Health Care: A Call to Action on Physician Burnout.”6 Moreover, in September 2019, Weill Cornell Medicine held the first-ever Medical Student Mental Health and Well-Being Conference, uniting over 350 medical school educators, students and researchers to discuss solutions for addressing the mental health needs of medical students in the U.S.7

A more intimate event contributing to this effort locally was held at the Johns Hopkins University School of Medicine on Nov. 14, 2019. The event, “Making Sense of Physicians’ Mental Health: Perspectives Throughout the Medical Career,” was hosted by the Office of Medical Student Affairs and the Student Wellness Initiative at the school of medicine. It featured a “fishbowl”-style conversation format involving a panel of six speakers in different stages of their medical professions (two students, two residents, one fellow and one practicing psychiatrist) who engaged in a frank conversation — open to observation by an audience of medical students and others — about their personal experiences with mental unwellness, their efforts to seek help, and their perceptions of mental health in medicine.

The session began with a brief introduction by Roy Ziegelstein, vice dean for education at the school of medicine, who emphasized the importance of having open forums such as these. “I’ve been involved in medical education for many years, and I will tell you something that I’ve observed,” Ziegelstein began. “Medical students, residents, and fellows sometimes develop physical health problems, as do people in other professions. In every instance, without exception and even if the problem is fairly serious, they feel that they can get better and become a highly functioning physician. On the other hand, I have found over the years that when students, residents, and fellows have problems with their mental health, they sometimes can’t even imagine the possibility that they will get better and one day be a highly functioning practicing physician. There are, no doubt, many reasons for this, and I think one of those reasons is a lack of normalization about discussions of mental health even among health professionals, and few opportunities like this one that provide a safe space where people feel comfortable speaking about mental health.”

Over the ensuing hour, the panelists participated in a candid back-and-forth exchange, which featured recollections of personal mental health challenges in medical school and residency and their journeys toward self-care and recovery. Students and residents shared about taking time off in medical school and internship, and the difficulty of admitting that such actions were necessary for the sake of their well-being. One of the panelists, a third-year pediatric resident, observed that it is common for medical students and trainees to delay seeking help until they reach a point of crisis. Recognizing one’s limitations, prioritizing self-care and seeking help early when problems begin, he said, were important ways to prevent the crises that can ensue when these efforts are neglected. 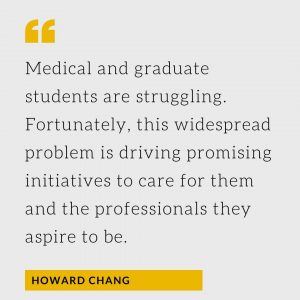 Indeed, a common sentiment held among the panelists was the inability to recognize or unwillingness to acknowledge one’s limitations. A fourth-year medical student shared that she refused to reach out for help when struggling with depression because she “always succeeded on [her] own” and had done well throughout her life with a “just try harder” mindset. For her, depression was the first problem she had encountered that could not be overcome with sheer willpower and self-reliance. Similarly, a medicine-pediatrics fellow on the panel spoke about a peer who maintained that he could simply “think [his way] out of depression” because this problem-solving tactic had succeeded for him in overcoming most troubles in the past. A second-year internal medicine resident mentioned that she was unable to identify the extent of her depression and need for help until her assistant chief of service pointed it out to her.

Multiple panelists also highlighted the deleterious effects of a “comparison” culture within medicine that tempts students and trainees to portray a mien of unwavering determination and steadfastness in order to fit in with their peers. The intention is to avoid appearing incapable of handling the same academic and professional pressures borne by others in their cohort. A third-year medical student wryly remarked how he has seen this manifest as a “Who’s the most miserable?” competition among his peers, as if the winner — the one who has slept or eaten the least in order to work or study — should be designated most noble.

A number of other obstacles to seeking help were voiced by the panelists. A resident recalled that as a medical student she was told to reschedule a doctor’s appointment when it interfered with a clinical training session. This later affected her willingness to take time off for therapy sessions because she feared transferring work to and disappointing her peers and attending physicians. A student reflected that some may not seek help because they do not recognize their “right” to do so within the hierarchy of medical training; he encouraged bringing these concerns to faculty mentors who would inform and empower them to take appropriate steps toward treatment. Finally, a fellow commented that some delay seeking help because they fear the long-term work and commitment that would be required of them to attain recovery.

The work, though, is worth it, expressed a student whose depressive episode nearly persuaded her that she was not cut out for a career in medicine. Treatment helped her unravel the truth-distorting nature of depressive thoughts such as this and restored her confidence in her ability to be a physician.

The discussion concluded with comments from Thomas Koenig, associate dean for medical student affairs and assistant professor of psychiatry and behavioral sciences, who offered reassurance to students like her that mental unwellness need not be a hindrance to reaching one’s goals because help is available and effective.

“In the midst of an episode of depression or anxiety, of course you’re going to feel [hopeless and incapable],” said Koenig. “I do worry that sometimes the fact of having had depression may make one doubt one’s ability to become a physician even when they’re well. You’ll be surprised how many, many, many successful faculty have had [depression], and it has not stood in their way if they’ve done what they need to do to take care of it.”

“I really hope that’s one of the big take-homes from here,” continued Koenig. “Having something like [mental illness] does not stand in your way if you take care of it.”

This message seems timely for many students pursuing graduate education, not just in medicine. Graduate students are over six times as likely to experience depression and anxiety compared with the general population, and they commonly report having an unhealthy work-life balance and not feeling valued or receiving ample support from their mentors.8 A Harvard survey showed that among doctoral students experiencing suicidal ideation or severe anxiety or depression, only about a quarter were actively receiving any form of mental health treatment.9 Clearly, graduate school students also stand to benefit from educational reforms and normalization of seeking help for mental unwellness. Early efforts to address this crisis are underway; for example, the Council of Graduate Schools recently launched the “Supporting Mental Health and Wellness of Graduate Students” initiative, which will seek to bring together graduate school administrators, students and mental health specialists to explore strategies for promoting well-being among graduate students in the U.S. and Canada.10

Medical and graduate students are struggling. Fortunately, this widespread problem is driving promising initiatives to care for them and the professionals they aspire to be. Most importantly, help is available now.

“[In medical school], it’s very easy to lose track of the big picture of why you’re here and [whether] you’re feeling OK and actually thriving and enjoying what you’re doing, or just ‘getting through it,’” said a third-year medical student on the panel.

“At some point I felt like so many facets of my life were suffering in a way that I could no longer ignore. Through speaking with great and supportive faculty, I could reach out and find resources to get help. … My hope is that exposing more people to our stories and how we’ve dealt with things like this will encourage them to seek help and not suffer for any longer than they have to.”

If you are a medical/graduate student, trainee or health care professional at Johns Hopkins struggling with mental or emotional health, consider reaching out to one of the following confidential institutional resources.