What Happens to Heart Cells in Space?


As you probably know, astronauts in space do not walk on the floor like people on Earth. Instead, they float around inside their spacecraft due to microgravity.

Microgravity is the term used to describe very weak gravity — when things seem to be weightless because the pull of gravity is not very strong. Part of the National Aeronautics and Space Administration (NASA) studies microgravity to add to our understanding of what happens to people and other things in space. For example, the muscles and bones of astronauts who spend months on the International Space Station (ISS) — a habitable artificial satellite in low Earth orbit  —  can get weaker. Long-term stays aboard the ISS are becoming more common, which raises questions about the effects of microgravity on human organ function.

The human heart is an absolutely critical organ. In pumping blood, the heart supplies oxygen and nutrients to the entire rest of the body. Because of its high importance, scientists are especially interested in understanding the effects of microgravity on heart function, metabolism and cellular biology. The recent NASA Twins study showed that one year of human spaceflight reduces average blood pressure and increases the volume of blood being pumped by the heart (cardiac output). However, little is known about the effects of microgravity on the individual cells that make up the human heart.

Human cardiomyocytes (CM) are the cells in your heart responsible for making it contract and are required to provide effective pumping of blood to various tissues and organs. These special cells are not easily available because they hardly divide in adult heart muscle. Because of this, scientists make cardiomyocytes from stem cells to study the molecular and cellular mechanisms of heart dysfunction. These stem cell-derived heart cells (hiPSC-CMs) can be mass produced, maintained in the lab long-term, and manipulated in glass dishes.

Microgravity and the Human Heart

Investigators in a multidisciplinary study published in Stem Cell Reports on October 2019 used hiPSC-CMs to provide insights into the effects of spaceflight and microgravity on human cardiac physiology, cellular structure and gene expression. Single layers of beating hiPSC-CMs, created from the stem cells of three different human donors, were sent to the ISS for 5.5 weeks. The cells were grown in special long-term microgravity cell culture dishes and launched to the ISS. 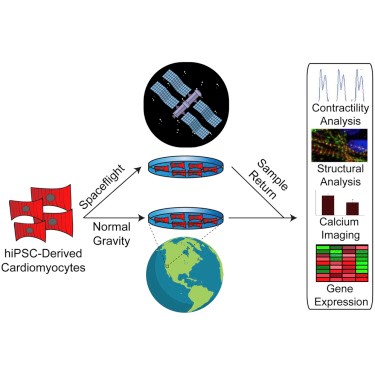 Upon return to Earth, space-flown hiPSC-CMs were found to retain their normal shape and function. To help researchers better understand the function of the space-flown cells, video microscopy was used. They found that ground and space-flown hiPSC-CMs had similar beat rates after 2.5 weeks of culture on the ISS, suggesting no differences in contractility. The investigators did observe a decrease in calcium recycling rate and expression of muscle filaments (myofilaments) genes in space-flown hiPSC-CMs. Cells use calcium along with muscle filaments to contract the heart muscle tissue and pump blood. These findings are important because they show that, at the cellular level, human CMs can adapt to changes in apparent gravity.

Gene expression is the process by which DNA is converted into a particular protein with a specific function, giving rise to an observable trait. The researchers analyzed the genes expressed during spaceflight and post-flight (after 10 days in space) in hiPSC-CMs and compared them to the genes expressed in ground hiPSC-CMs. They found that the heart cells in space increased their expression of genes known to contribute to the regulation of heart mass and genes encoding proteins involved in muscle contraction (sarcomeric genes). Moreover, gene expression pathways related to the heart cells’ ability to make energy (heart metabolism) were also increased in space-flown hiPSC-CMs. Interestingly, heart metabolism-related genes that were increased during spaceflight, were still greater post-flight when compared to ground controls, suggesting that returning to normal gravity does not completely return the expression of heart metabolism genes back to normal. Lastly, flown samples showed reduced expression of genes related to DNA copying, dividing and repair compared with both post-flight and ground samples. These results suggest that hiPSC-CMs adopt a unique gene expression pattern during spaceflight, but some expression patterns, such as the ones for DNA division and repair, can revert to ground controls upon return to normal gravity.

Although highly interesting, this study had limitations, including the time of exposure to gravity. It is possible that longer exposure to microgravity or longer post-flight period, may change the extent of irreversible and reversible gene expression changes. In addition, the in-flight RNA samples were preserved at different time points than post-flight and ground samples, which may have skewed the observed gene expression results. Other variables — radiation levels in ISS vs Earth, forces that cells experienced during launch and reentry, media change timing, environmental conditions, etc. — may have also affected the results. Nonetheless, this study showed for the first time that hiPSC-CMs can model the effects of spaceflight and microgravity and that human heart muscle cells, like the whole heart, change their function during spaceflight and compensate for the loss of gravity by altering their gene expression.

As spaceflight becomes more commonplace, studying the effects of microgravity in humans will play a big role in how we explore our solar system. Studies like this help lead the way for improving our understanding.