Winning the Fulbright During COVID-19


Winning a major grant usually gives the lucky recipient feelings of joy and security. During a pandemic, however, a successful grant application can elicit both happiness and uncertainty.

The Fulbright grant, funded by the U.S. State Department, is one of these major grants. COVID-19’s rapid spread forced the program to pull its 2019–20 grantees from the countries where they were working. According to Inside Higher Ed, the program only continued to pay the grantees through June 2020, no matter how long they had been in their intended country — some grantees started their work in January or February 2020, meaning they were not able to use the full nine months as promised. Despite this tumult, the Fulbright program awarded grants for 2020–21. One Johns Hopkins University history of medicine graduate student, Anna Weerasinghe, was awarded a Fulbright-Nehru Open Study/Research Award to work on her dissertation research in India. Her story highlights the privileged yet precarious nature of receiving a grant in a pandemic world.

Weerasinghe’s Fulbright research will examine how women healers and patients of different ethnicities, religions and classes provided and accessed medical care in Goa, a Portuguese colonial port city on the Indian coast, between 1500 and 1700. “Most Europeans who traveled to Portuguese South Asia during this period were men,” she explains. “A significant number of those Portuguese men who came and settled [in Goa] married Indian women.” These cross-cultural relationships helped the Portuguese access social and diplomatic networks, as well as medical care. “Without [them], the Portuguese would have struggled to build the local contacts they needed to make a trade deal, or sign a peace treaty or find a good healer,” Weerasinghe says. As a result, studying the lives and practices of women healers and patients gives her unique insight into European and South Asian medicine in Goa.

While writing her Fulbright application, Weerasinghe was already in the first phase of her research, supported by a different research fellowship. “I spent the fall of 2019 in Goa,” she says. “I looked at institutional records to gather the names of women healers and trace their network of practitioners and patients.” She primarily used medical licensing documents to create a personal-use biographical database, which now holds about 1,500 entries of midwives, physicians and more. The Fulbright grant will enable her to start phase two, “to use this database of names and biographical details to move into other kinds of records … that will tell me more about the lives of these women — their healing practices, the money they earned, their social lives, etc.,” Weerasinghe says. 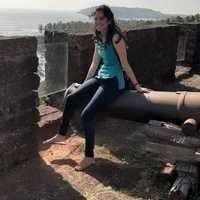 In light of the pandemic, Weerasinghe greeted the Fulbright program’s congratulatory email with mixed emotions. She received the message shortly after returning to the United States from her continued research in Italy and Portugal, which she left when the borders closed. “I was only there for five days when the border closure was announced,” she explains. “I wasn’t sure at the time how strict entry restrictions would be or how long they would last, so I decided to leave.” So, when she won the Fulbright grant, she was anxious about the international situation. “It’s an honor to have my work supported this way,” she says. “But everything’s so uncertain.” What if the Fulbright program cuts the grant short because of a viral resurgence? Or worse, what if India cancels the program this year, following Indonesia’s and Israel’s decisions?

The uncertainty has only worsened as virus rates in India jump each day. The inability to strategize for the future troubles Weerasinghe:

“The hardest thing for me, aside from worrying about friends and family over there, is not being able to plan ahead. I just don’t know if I’ll be able to make it back [to the archives]. I’ve rewritten the plan for my dissertation on the assumption that I may have to depend on material I can reach from home. Luckily, I have enough to write a dissertation, but it won’t be the project I initially proposed.”

Archives in decolonized countries enable nuanced research that reveals the unheard stories Weerasinghe seeks to unearth. “Most scholarship on the history of medicine in Portuguese South Asia focuses on European men,” she says. This is not surprising, since the most accessible historical sources — those that have been published or digitized — tend to concern trade, diplomacy or missionary activities. To better consider gender and medicine, Weerasinghe turned to less accessible records, which she read “against the grain,” or considering underlying meanings of colonial discourse, to catch glimpses of women healers.

The process has been made challenging by limited access to the archives. “It’s frustrating to have that ambition of writing history from the bottom-up thwarted,” Weerasinghe says. “I’m not giving up, but I’m not going to be able to share those stories [of women healers] the way I hoped to.”

As everywhere in academia, COVID-19 has destabilized many grant agencies and limited the kinds of research that graduate students can perform in both the sciences and the humanities. Weerasinghe notes how promised funding that suddenly disappears can prove a dire financial problem. “Many programs won’t pay fellows whose program is canceled, which can be a serious issue if your department isn’t able to fill that funding gap,” she says. For Weerasinghe and others like her, including me, grant instability has impaired the ability to perform the thorough work for which our graduate careers prepared us.