The coronavirus pandemic has devastated the U.S. There have been over 100,000 deaths, more than 42 million people have lost their jobs together with their health insurance, and many businesses are struggling to maintain economic activity. While the virus continues to ravage the nation, the Trump administration has a new target in mind: legal immigration.

The current youth unemployment rate is almost 30%, which has led many lawmakers to push for restrictions in immigration. These restrictions apply to highly skilled foreign workers under H-1B visas, as well as recent graduates of American universities temporarily working under Optional Practical Training, also known as OPT. The underlying reason for this type of legislation is that American students finishing college shouldn’t have to face a job market made more competitive by foreign workers. “After 60 days, we urge you to continue to suspend new nonimmigrant guest workers for one year or until our national unemployment figures return to normal levels, whichever comes first. That suspension should, at a minimum, include H-2B visas, H-1B visas, and the Optional Practical Training program,” four Republican Senators asked in a letter to the White House on May 7. These policymakers argue that students staying in the U.S. after college or graduate school are taking away jobs that would otherwise go to unemployed Americans.

In addition to sending thousands of students and employees back to their home countries or to other competitive nations, a suspension on work visas sends a strong message to current and future students seeking an education in the United States: You are not welcome.

The value of OPT for international students and the United States

International students who complete their undergraduate and graduate education in the U.S., and wish to remain in the U.S., must extend their F1 student visas to Optional Practical Training (OPT) status and obtain employment within their field of study. The goal of OPT is for international students to gain practical skills in their field of study as part of their professional development. OPT allows students to work for 12 months and, in the case of students in STEM fields (science, technology, engineering and mathematics), up to 36 months. Upon the completion of OPT, some international students apply for the H-1B work visa, sponsored by their employers, which allows them to extend their stay in the U.S. for six additional years.

Suspending working visas and OPT may seem like a clever way to ensure that Americans benefit from job market opportunities after COVID-19. In reality, however, the long-term repercussions of a visa and OPT suspension to the economy, job market and entrepreneurship are significant. Indeed, the United States benefits greatly from international students. In 2019, U.S. Citizenship and Immigration Services (USCIS) approved the highest number of OPT requests ever, more than 223,000. In less than two decades, the number of approved OPT applications has tripled, and half of that growth is due to STEM OPT. International students have an immensely positive impact on the U.S. economy, contributing more than $41 billion in revenues annually. Additionally, a study looking at data on international students with STEM majors showed that there was no relationship between student OPT recipients and a reduction in job opportunities for American workers. This confirms another study’s results, which showed that restricting OPT would cause the unemployment rate to rise, demonstrating that these programs increase job opportunities for Americans overall. Moreover, economic literature has shown that communities with higher STEM OPT individuals have higher patent rates, higher productivity and higher wages for U.S. workers. 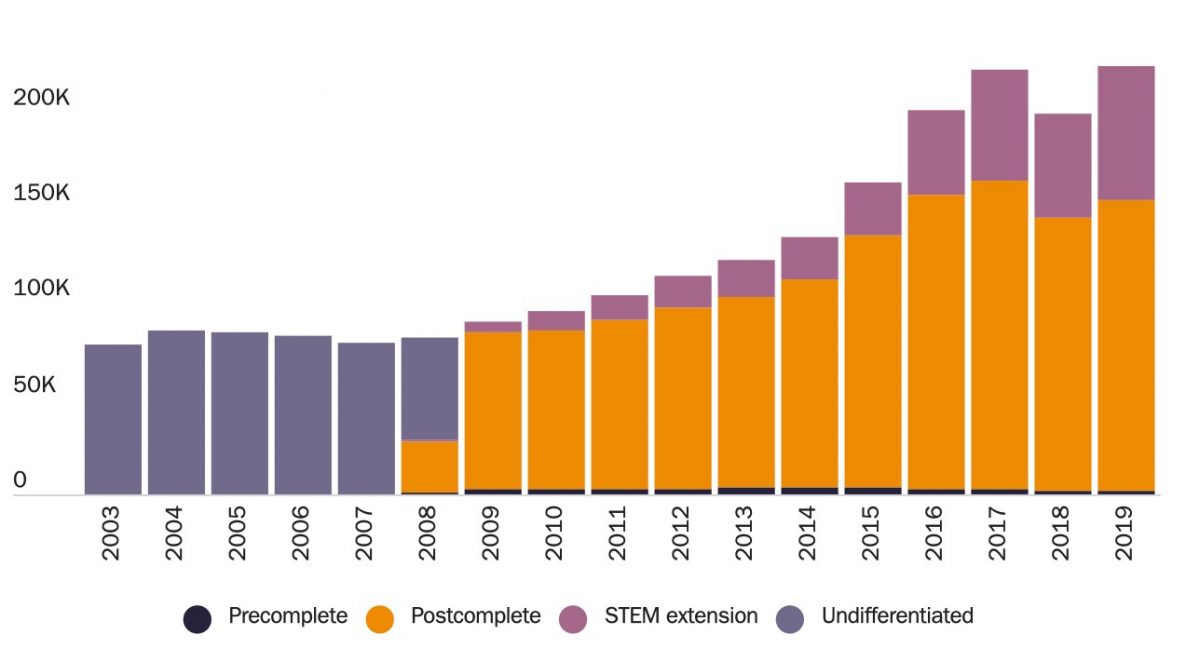 USCIS approved Employment Authorization Documents for OPT by type. Figure by CATO institute. Figure shows the increase in OPT approvals by USCIS, which have more than tripled since 2003. STEM OPT accounts for much of this growth, especially due to its extension.

For many students abroad, coming to the United States to get an education is just part of a long journey to continue their professional development. STEM graduates under OPT can then contribute to the scientific workforce, as well as provide new and innovative perspectives in research. It is this diversity in the scientific workforce that makes the U.S. a leading force of scientific innovation. Scaling back these programs will most likely have an impact on the number of international students in American universities, who will see the impossibility of working after graduation as an insurmountable barrier and might look to other countries that provide an easier path.

Unfortunately, the current administration’s rhetoric surrounding foreign policy and immigration has had a negative impact on international students. After the 2016 election, the number of F-1 visas issued to foreign students decreased by 17%. This decline has continued since then, and a new report from NAFSA estimates that such decline in foreign student enrollment has cost the U.S. economy almost $12 billion and more than 65,000 jobs.

This anti-immigrant rhetoric has existed long before 2016. Much of the administration’s actions on this issue can be attributed to the immigration policy adviser, Stephen Miller. Prior to being one of the president’s most trusted advisers, Miller helped draft a bill (S.2934) in 2015, introduced by Sen. Ted Cruz and co-sponsored by Sen. Jeff Sessions, that would have completely eliminated OPT and required international students to work 10 years outside the country before being eligible to work in the United States. This bill was introduced and referred to the Senate Judiciary Committee, ultimately failing to pass. In fact, OPT STEM was extended for students a year later from 17 to 24 months.

This administration has actively worked on restricting legal immigration by limiting international students’ visas. In 2017, Trump signaled his determination to restrict legal immigration by signing an executive order aimed at limiting the maximum period of authorized stay for F-1 students. In 2018, USCIS announced its efforts to change how “unlawful presence” by foreigners is calculated such that the implications of visa overstay could result in a 10-year ban from the country. This last proposal was met with criticism by student advocates and higher education institutions, resulting in a lawsuit by universities that blocked USCIS policy memos and its possible consequences. Interestingly, even within the administration, some officials have described OPT as “one of our greatest strengths,” showcasing the differences in opinion on the importance and benefits of attracting international students to the U.S.

However, the COVID-19 pandemic is now being used to legitimize such long-standing policy goals, providing a context to restrict legal immigration and, possibly, suspend OPT. On April 22, President Trump issued an immigration order that mimicked a Senate bill that was rejected in 2018, suspending entry for 60 days of certain new immigrants. Just a few days ago, he also issued a presidential proclamation restricting the entry of students and researchers from China. It is important to note that the majority of F-1 visas and OPT issued are for Chinese students. Specifically, the order affects those students in J or F visas in graduate programs if they have ever been connected to Chinese institutions with military ties. Much of the proclamation does not specify which institutions those are and leaves the implementation to the State Department. Even then, it is unclear how this policy will be applied, and more measures could be on the way. An important consideration is that this policy allows the State Department to revoke visas already issued to these students.

This comes at a time that some members of Congress are also pushing for laws that would ban the entry of many students. The Fairness for High-Skilled Americans Act of 2019 (HR.3564), introduced by Rep. Gosar, would completely eliminate OPT. Sen. Cotton, one of the signees of the previously mentioned letter to the White House, introduced the Secure Campus Act this spring, a bill that would bar the U.S. from issuing visas to Chinese students hoping to get graduate education or academic research in STEM. Additionally, such bill will also require that federally funded grants are not awarded to Chinese nationals and that recipients of those grants do not hire Chinese nationals to conduct grant-funded activities.

These efforts to completely eliminate OPT and restrict international students haven’t been successful, most likely because of the administration’s plans to support businesses, which have been very supportive of OPT. Two weeks ago, 324 employers, associations and groups across the nation signed a letter urging President Trump to maintain the OPT program, citing its benefits and the negative impact that reducing OPT would have for the American economy: loss of almost 500,000 jobs over a decade, including 225,000 jobs held by native-born workers. However, even if these bills do not pass the Senate, the president could sign an executive order and other presidential proclamations. An example is the April proclamation in which President Trump suspended entry for 60 days of certain immigrants, which was very similar to a rejected 2018 Senate bill.

Now more than ever, scientific societies and universities have a duty to protect students from such attacks by Congress and the administration. Academic institutions should oppose any and all efforts that will restrict much-needed diversity in education and the STEM workforce.

OPT reform should be focused on strengthening the program, not stripping it apart

Upon the extension of STEM OPT from 17 to 24 months, new regulations were added that increase oversight of these extensions, strengthening the program for both employers and students. Some of these include employers ensuring no American worker is being replaced with someone on OPT, providing equal compensation and working conditions for those hired on OPT, and requiring the implementation of training programs, among others. Some reform for OPT might be needed, especially focused on protecting the working conditions of those on OPT, who are not guaranteed a minimum wage level. In fact, OPT recipients could be working unpaid as long as their work does not violate labor laws.

Many lawmakers still call for more OPT reform. Some of these regulations, however, aren’t intended to strengthen the program. Instead, they’re used as chance to pass anti-immigration policies aimed at targeting foreigners, especially Chinese students, and their ability to work in the U.S. Ironically, many of those wanting to restrict international students in the U.S. complain that such students come to the U.S. to get an education and go back to their home countries instead of continuing to contribute to the U.S. economy. These individuals should be advocating for OPT, as it provides the bridge between getting an education in the U.S. and continuing to work in the States, which strengthens America’s position as the country that attracts new talent, new ideas and innovation. That, probably, doesn’t fit well with the “America First” doctrine of this administration.

Even if the OPT suspension is temporary, the impact will have long-lasting consequences. Doug Rand, the previous assistant director for entrepreneurship in the Office of Science and Technology Policy in the Obama White House, recently said that the nightmare scenario would be a suspension of OPT where those who have applied are out of luck, and those on the program have to leave the country. While it is true that presidential powers are limited when dealing with the immigration status of individuals in the U.S., Rand argues that “even active discussion of suspending OPT has an impact.”

The values of America and American Education

As much as the OPT program might need reform, the use of the pandemic to push forward policies and political talking points that target international students, specifically from China, is disheartening. Many of us have come to the U.S. and found a place of acceptance, value and recognition. Many of us have gotten an education here and want to continue to contribute to the U.S. economy, research enterprise and scientific workforce. Many of us will have spent almost 10 years in America with, maybe, no possibility of continuing our journey. These policies have a bigger impact than just a temporary suspension. They send a strong signal that the U.S. does not welcome international students who want to contribute to American education and innovation.