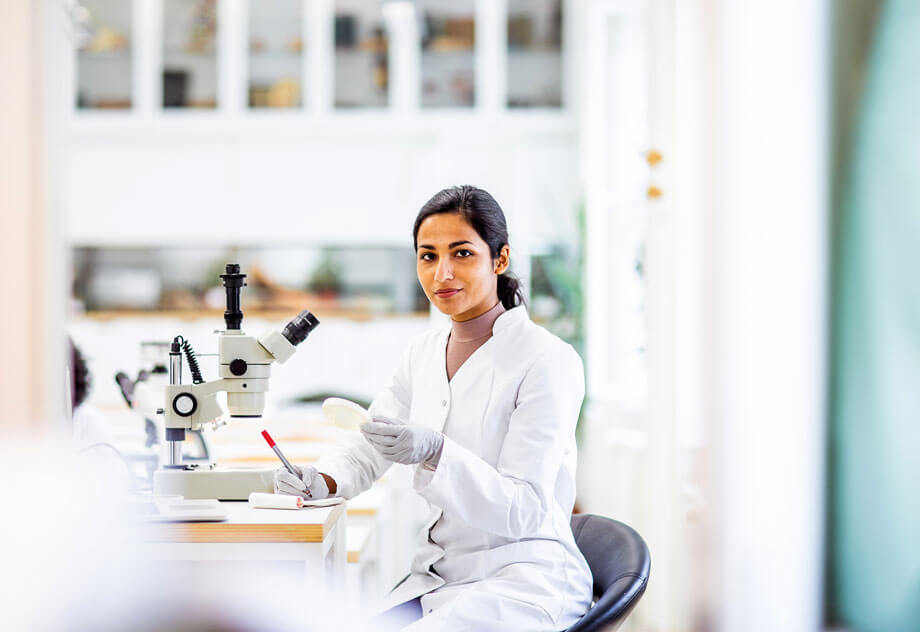 On June 6, a range of science writers attended the Science Writers’ Boot Camp hosted by Johns Hopkins at the National Press Club in Washington, D.C. The event focused on scientific research discoveries at Johns Hopkins centered around the theme of female health. Researchers discussed scientific advancements such as how COVID-19 affects women’s menstrual cycles, the statistical simulation and prediction of menstrual cycles at the level of individual variability, the role of imbalanced microbial levels in breast cancer development, and menstrual cycle-related mood dysregulation in what is known as reproductive psychiatrics.

Straying from the focus on female health, though, were the unique presentations and panel discussion on women in biotech entrepreneurship. During this segment, attendees heard Sujatha Kannan, professor of anesthesiology and critical care medicine, speak about Ashvattha Therapeutics, the startup she developed alongside her husband, Kannan Rangaramanujam.

Ashvattha Therapeutics was founded on the development of a nanoparticle system that selectively targets injured immune cells for destruction. This nanoparticle system can be conjugated to disease-modifying drugs to alleviate the drastic consequences that accompany therapies for neurological diseases. Current management of neurological disease may include brain resection and the consequential removal of both healthy and injured cells, which leads to complications such as strokes, seizures, and loss of coordination, balance, memory and speech, among others. Kannan’s nanoparticle system enables the selective targeting of inflammatory cells, has been tested in numerous disease models, and is currently undergoing clinical trials.

As a scientist who interacts with venture capitalists and other stakeholders in her company, Kannan admits she feels best suited to answer scientific questions posed her way, and not company-related questions, choosing instead to relegate those to other team members. Building skills required for the advocacy of your biotechnological discoveries is important, but as we learn from Kannan, it is also important to be comfortable working with a team equipped to handle different aspects of the biotechnology landscape.

Christy Wyskiel, executive director of JHTV, compares the process of translating a scientific discovery with baking a cake. The science is merely one ingredient that investors are interested in, but they are also interested in the marketability of that product and its chances for success (which constitutes the whole cake). Wyskiel describes JHTV as the chef, helping scientists create a cake to present to investors and venture capitalists by facilitating these skill-building activities, organizing entrepreneurship and networking based-events as well as pitching practices, some of which specifically target female entrepreneurs.

The need for female-targeted skill-building initiatives can be interpreted in light of statistics that illustrate that females secure only about 2% of venture capital if they are a sole founder of a company, whereas if they are a co-founder with a male, they secure 15.6%. Wyskiel is quick to highlight the role that differential treatment may play in this discrepancy, in which male entrepreneurs are more likely to be asked by investors whether their idea could be the next “big thing” whereas female entrepreneurs may be questioned on what could go wrong. In other words, Wyskiel suggests that female entrepreneurs experience a greater degree of criticism for their startup ideas.

When asked what she thinks influences the extent of female entrepreneurship in biotechnology, Wyskiel emphasized the need for female role models and a network. She states, “Like so much in life, if you don’t have the network, if you can’t look at and relate to others who have done this, and if you don’t have resources that are specifically tailored to help you think through this, then you’re not going to see yourself in that game.”

Opportunities to learn more about the field of biotechnology exist at Johns Hopkins through various avenues, such as JHTV events offered to professionals at various stages of their careers and to students by way of the JHTV Commercialization Academy and the Hopkins Biotech Podcast. Though a career in biotechnology may be less commonly discussed in Ph.D. programs, it is not too early to explore the field; indeed, there is vast need for trained scientists to become active in the field, bringing their expertise at the intersection of science and business.