On Tuesday, May 1, I attended the Johns Hopkins School of Medicine-hosted seminar titled The Role of Health Care Professionals in Reducing LGBTQ Health Disparities, given by Andrew Hollenbach, an alumnus of the Bloomberg School of Public Health. Hollenbach is an assistant professor in the Department of Genetics and the co-director of the basic science curriculum at the Louisiana State University School of Medicine. He is a former member of the AAMC (Association of American Medical Colleges) Sexual Orientation, Gender Identity and Sexual Development Project advisory panel and has been instrumental in the inclusion of LGBTQ+ care in the medical school curriculum. The seminar was a version of the lecture he gives to first-year medical students, made slightly more intimate via the inclusion of Hollenbach’s own personal and professional experiences as a gay man. Although his seminar title might suggest the talk is specifically for health care professionals, Hollenbach made clear that no matter who you are, it is essential to understand your community from the ground up, including the LGBTQ+ community.

Hollenbach framed his seminar as a discussion of ignorance. He explained that lack of information or refusal to seek out information about people or topics with whom you are unfamiliar is at the root of LGBTQ+ disparities. To combat the disparities we must combat the ignorance. To this end, he began with a discussion of history and terminology in LGBTQ+ health care. I have chosen to highlight those definitions and historical facts that I found to be particularly interesting. View a more comprehensive overview of LGBTQ+ terminology.

Hollenbach listed several historical facts that highlight how recent any progress in LGBTQ+ health care is. Notably, it was not until 1973 that homosexuality was removed from the Diagnostic and Statistical Manual of Mental Disorders (DSM), and not until the 80s that there were any kind of guidelines for health care professionals regarding how to treat LGBTQ+ individuals. The situation did not improve throughout the 1980s, during which over 27,000 men died in the United States due to the AIDS epidemic. Both the U.S. government and the medical community failed to take the customary steps to contain an emerging infectious disease due to indifference at the loss of the main victims: homosexuals and drug addicts. For this reason, much of the response to the AIDS crisis came from within the gay community, which mobilized to put out advertisements and pamphlets promoting safer sex practices within their community. In 1987, however, Congress banned the use of federal funds for AIDS prevention and education that promoted homosexual activities, even indirectly. This led to most of the AIDS prevention advertisement funds going toward ads that targeted low risk populations such as straight, white women. Within the medical community, early theories postulated that it was the homosexual “lifestyle of promiscuity” that naturally led to a compromised immune system, rather than a deadly pathogen.1 Even a study conducted in the 1990s showed that many doctors did not want to treat patients for AIDS because they believed it to be a socially acquired disease.2 The lack of response to the AIDS crisis remains a very clear example of the destructive power of ignorance. By defining AIDS as a gay disease, rather than a human disease, the medical (and global) community effectively relegated the gay community to a small corner of their minds where the death toll was less troublesome, and where they needn’t participate in efforts to learn about the gay community and the disease that devastated it.

Although the 1980s may feel like a long time ago, there are many more recent examples of how the LGBTQ+ population has been neglected or treated unfairly within the medical community. It wasn’t until 2013 that gender identity disorder (being transgender) was removed from the DSM and replaced with gender dysphoria. Individuals who identify as transgender experience “gender discordance” (a difference between the gender assigned at birth and the gender with which they identify) and this may lead to internal stress that disrupts their ability to live, termed “gender dysphoria.” The goal of transitioning is to relieve this internal stress and may include changes in dress, hormone therapy, gender-affirming surgery or any combination of these. Removing gender identity disorder from the DSM and replacing it with gender dysphoria may seem trivial, but it was a crucial step. Inclusion of gender identity disorder in the DSM suggested that being transgender is a mental illness. So why include any aspect of the transgender experience in the DSM? Defining the internal stress of gender discordance (dysphoria) as a disorder paves the way for insurance coverage of medical expenses associated with transitioning. That is to say, if no aspect of the transgender experience was defined as a disorder, it would be impossible to justify insurance coverage of treatments such as hormone therapy and gender affirming surgery. Sadly, today most insurance companies still consider gender-affirming surgery to be “cosmetic.”

Hollenbach used these historical examples to underscore the imperative nature of specific terminology that is utilized and shared between a patient and their health care provider. He defined sexual orientation as “who you go to bed with,” which is distinct from gender identity (“who you go to bed as”). The options for each of these parameters are limitless. In terms of sexual orientation, individuals might identify as heterosexual, homosexual, bisexual, pansexual, asexual and many more terms. Gender identity can be described with words like transgender, cisgender, gender nonconforming and genderqueer. It is important to remember that terminology is complex, fluid, highly personal and allowed to change. For example, many LGBTQ+ individuals of my generation identify as queer, but because of how the term was used in his youth, to Hollenbach the term “queer” still feels like a cruel epithet.

In addition to sexual orientation and gender identity, Hollenbach discussed differences in sexual development. An example of this is an individual with androgen insensitivity syndrome (AIS). People with AIS are born with XY chromosomes but are insensitive to the male sex hormone androgen (sometimes due to an androgen receptor mutation). Because of this, they don’t develop male sex characteristics and are biologically female, although they do not have a uterus.

Sexual identity is therefore a convergence of biological sex, gender and orientation. For example, I would identify as a bisexual, cisgender woman, with XX chromosomes. All of these parameters provide distinct information about me as an individual. 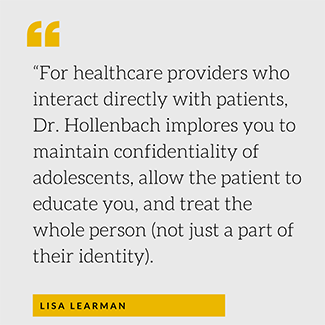 Once familiar with the appropriate terminology, it is necessary to educate yourself on the specific nature of LGBTQ+ health disparities. LGBTQ+ individuals have an increased risk of abuse of prescription opiates, inconsistent condom use, illicit drug use, depression, anxiety, suicide and cardiovascular disease. Hollenbach suggested that these disparities stem from a combination of factors that also make LGBTQ+ individuals less likely to seek out health care. Factors that might drive this tendency include: a decreased sense of self-worth; the mistrust of people in authority due to decades of criminalization; pathologization of their identity; discrimination; and history of lack of response by health care professionals. Another large contributing factor is that LGBTQ+ individuals are less likely to have health insurance. This could be due to increased rates of unemployment due to discrimination, or increased likelihood for LGBTQ+ youth to be disowned by their families and therefore not included on their health insurance plans. It is important to note that many of these disparities are even worse for people of color within the LGBTQ+ community.

So what can we do to ameliorate these seeming insurmountable disparities? Although Hollenbach’s insights are especially important for those involved in patient care, they are useful for everyone. The most basic of these is to admit ignorance. We are all ignorant of something. After admitting ignorance, take action. Gain knowledge and educate others. Correct discriminatory behavior when you see it. Respect pronouns. For health care providers who interact directly with patients, Hollenbach implores you to: maintain confidentiality of adolescents (don’t reveal their sexual orientation or gender identity to their parents without their consent), allow the patient to educate you and treat the whole person (not just a part of their identity). No matter who you are, enacting compassion and humanity toward others necessitates admitting ignorance.

Share This Post
LGBTQLGBTQ heath
« Three-Minute Thesis: A Case Study in the Economics of Communication » On How and Why Science Is Political