Diversity at the Top of the Social Media Signaling Cascade

Caroline's essay received 3rd place in The Lasker Foundation Essay Contest. The Lasker Foundation’s Essay Contest engages young scientists and clinicians in a discussion about big questions in biology and medicine and the role of biomedical research in our society today.  The Contest aims to build skills in communicating important medical and scientific issues to broader audiences. 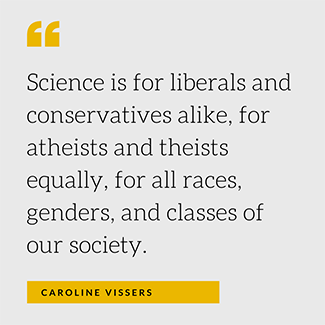 The critical aspect of science that makes it a centerfold of our society is that it applies to everyone. It is the most honest interpretation of “by the people, for the people,” with the added benefit that political strife cannot alter scientific truth. Science is for liberals and conservatives alike, for atheists and theists equally, for all races, genders, and classes of our society. Much like democracy, however, there have traditionally been select individuals who represent science to the broader public. For example, the proportion of non-white scientists steadily decreases in the transition from graduate students to full professorships. The power of social media stems from its ability to dissipate  power from a select few scientists to the diverse body that makes up the scientific community. The convoluted nature of many scientific discoveries can make it difficult for non-scientists to trust the data presented. While science likely will not become less convoluted, the relatability of how it is presented is an addressable issue.  Science activists must be representative of the population they are trying to reach. In short, social media has the power to humanize science by  providing an incredible diversity of faces to represent science, thereby engaging a broad range of diverse communities.

A conscious effort must be made to diversify the representors of science who then use social media to disseminate their knowledge. Much like a signaling pathway, diversity is upstream of social media outreach, and improving this step in the pathway will create a cascade of positive downstream results. I therefore propose a multi-faceted approach to improving trust in science through social media. First, major funding agencies must not only require support of diversity as a criterion in funding, but must promote continued learning about the investigator’s own identity, especially racial identity, and how that interplays with their subordinates. Second, writing for scientific outreach should become a staple of graduate education. Social media has quickly become a major channel of public communication as a platform for the incredibly high volume of scientific voices. Writing effectively for such a platform is a teachable skill, and could further give minorities the opportunity to lead and engage in conversations that often are overrun by majority voices in physical spaces like scientific conferences.

Social media is a highly personal platform, yet scientists are rarely asked to reflect on their own identities. The current standard of promoting diversity by funding or hiring diverse scientists falls  short  in  creating  an  interpersonal  understanding of how  underrepresented minorities are viewed and treated by their colleagues. In this personal sphere, examining how one’s own identity has influenced their scientific success is the first step in understanding the struggles of others. Funding agencies should require applicants not only to discuss how they would outwardly promote diversity, but also to specifically reflect on their own racial, gender, or other identities and how this has shaped their journey through science. Social media provides access to an incredibly diverse network, and understanding one’s own space within this network would allow for more genuine connections with the heterogeneous public. Additionally, national science organizations should create a program that suggests one book per year, chosen by a group of underrepresented minority scientists, as suggested reading for all scientists. Graduate programs should then implement annual seminars to discuss the reading and help students better understand their own identities and biases.

As the scientific community becomes more diverse, and therefore more representative of the general public, reaching the communities that struggle to trust science will innately become easier.  Learning about science from someone who shares your religious beliefs, racial identity, or political values is much more convincing than hearing it from someone with whom you largely disagree. While many scientists are not primarily focused on community outreach, it is important to remember that the purpose of science is to improve the lives of all people, and that society must accept and promote scientific progress to fully integrate new discoveries into the social fabric. Therefore, graduate students should study the art of marketing science to the public through a variety of social media strategies as part of their graduate coursework. Individualism in social media is key to making science relatable, and teaching students how to preserve their own voice and identity while promoting their belief in science will be key to making their outreach trustworthy in the eyes of the public.

While getting scientists to deeply reflect on their own identities and biases may be difficult, it is a necessary step in creating a community that better understands and represents the public. By providing tools for this reflection alongside skills in science communication, this proposal will lay the foundation of a social media platform that empowers the voices necessary to build public trust in science.

« Recent Study Reveals How the Brain Learns from Others’ Mistakes » Targeting Diabetes with a High-Fiber Diet: It’s All in Your Gut!