A couple of weeks ago I indulged in a morsel of nostalgia along with my fellow millennials and went to see Incredibles 2. If you’ve seen the movie, you know that the villain uses hypnosis as a weapon. When I exited the theater and stepped out into the musky night, I was in a post-movie stupor. It struck me that hypnosis is a particularly creepy method of villainy because, although its effects seem supernatural, it is rooted in reality. Of course, real hypnosis cannot be used for mind control, does not involve actual brainwashing and is not magic. So what exactly is hypnosis? This article contrasts real hypnosis with how it is represented in media, explores the use of hypnotherapy in medicine and examines different theories for the mechanism behind the phenomenon.

What Hypnosis Is and What It Isn’t

For most of my life I thought hypnosis was a hoax. It was presented as an extranormal power in the superhero cartoons I watched and the science fiction books I read, or else performed in stage magic shows where I knew everything was deception. One day my mother told me that she had been effectively hypnotized as a child to get over the mental hurdle of touching her eye to put in her contacts. After she described it to me I thought, “OK, that seems real, but that’s not hypnosis; it’s just like therapy or putting someone in a more relaxed state.” I had no idea that what my mother experienced was hypnotism, just without the media’s dramatization — no creepy mustachioed men dangling pocket watches while saying, “You’re getting very sleepy,” or global TV broadcasts of spirally patterns instigated by someone hell bent on world domination.

Many psychologists say that humans experience “hypnotic states” all the time. Most often, this occurs when we “lose” ourselves completely in a book or music. You are conscious, but you tune out all the stimuli around you. You are so far gone that you don’t hear when someone says your name, even if they are sitting right next to you. While in this hypnotic state the subject is open to suggestion without loss of free will or moral judgement. This is what allows the subject to experience vivid imagery of what the book “suggests,” even though it’s not really happening. The subject retains full memory of their thoughts and actions while in the hypnotic state.

Interestingly, some people are more easily hypnotized than others. The Hypnotic Susceptibility Scale was developed at Stanford to quantify this in the 1950s. Generally, those who go through traumatic experiences in childhood are more hypnotizable than others.2 One proposed reason for this is that in their developing years they learned how to use their brains as an escape.

I know what you’re thinking; enough with this 1950s psychology talk and vague terms like the conscious and subconscious mind. Where’s the physiological evidence? Where are the peer-reviewed journal articles? Does that sort of evidence exist? Regarding the efficacy of hypnotherapy in medicine, it definitely does.

Often, medical dramas have an episode in which a patient will opt to be hypnotized instead of having general anesthesia during a major surgery. The doctors strongly discourage this, dismissing hypnotherapy as pseudoscience. Of course, it is extremely dangerous to use hypnosis instead of tried and true pain management methods, but what about as an extra layer? Most of the time, hypnosis is used during minor procedures as an addition to local anesthetic, or after surgery as a treatment for postoperative pain.3 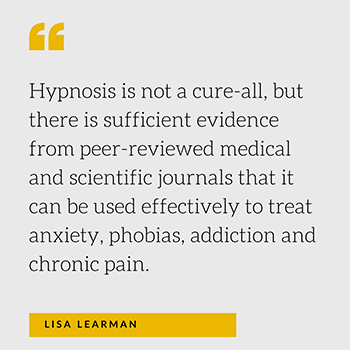 Hypnosis is not a cure-all, but there is sufficient evidence from peer-reviewed medical and scientific journals that it can be used effectively to treat anxiety, phobias, addiction and chronic pain.4 Most research for chronic pain has been done in burn patients where regular wound care is very painful, and hypnosis is used to reduce the perception of pain during bandage changes.5 There are also encouraging results from controlled clinical trials where hypnosis has been used to reduce daily pain from osteoarthritis, fibromyalgia and chronic migraine.6 Additionally, there is evidence that hypnotherapy can help alleviate the anxiety and depression that often accompany chronic pain in these diseases.6

Although there is growing evidence that hypnosis can be used to fight pain, the molecular mechanisms behind how it works remain mysterious. With our growing toolbox of molecular neuroscience techniques, I hope this will not remain the case for long. But even though we haven’t gotten down to the level of cells and molecules, there is some physiological data describing what happens to the brain in the hypnotic state.

Much of this evidence comes from EEGs (electroencephalographs), which measure electrical activity in the brain. Researchers look at rhythms of voltage in the EEGs and associate them with different states. For example, there are particular rhythmic patterns associated with wakefulness, deep sleep and dream sleep. Overall, during hypnosis there is a higher occurrence of the rhythmic patterns associated with dreaming and sleep, even though the subject is conscious.7

Some EEG-based studies suggest that hypnotherapy eliminates the emotional experience of pain while retaining the sensory sensation. These studies show that hypnosis modifies the activity of the insular and the anterior cingulate corti, regions of the brain that have previously been linked to pain perception.8 In fact, studies of the anterior cingulate cortex illustrate that it is possible to separate the sensory input of pain (information regarding location and intensity) from the emotional response to pain via manipulation of this region.9

Although I strongly discourage anyone from using hypnotherapy in lieu of medical treatments as recommended by your doctor, there is strong evidence to suggest that hypnosis modulates activity in brain regions associated with pain, and that it can be used in addition to the standard of treatment to help relieve some of the psychological and neurological symptoms of chronic pain. Learning about the parts of hypnotism that are valid could help elucidate mechanisms for phenomena that remain enigmatic such as memory, addiction and mental health disorders.