Humans are constantly making decisions about how to spend time, yet we are pretty terrible at doing so effectively. We sit through boring movies, stay in line at a crowded restaurant and continue to pursue low-return projects, because we simply cannot bear to see the time we have already invested in these activities go to waste. According to economists, however, the only thing that should guide our decisions is future return — the amount of reward we can anticipate as we look forward. They term the common human mistake of being overly attached to past investments the “sunk cost fallacy.”

According to a new study, published by a team of neuroscientists at the University of Minnesota, humans are not alone in succumbing to the effects of the sunk cost fallacy (Sweis et al., 2018). The authors found that mice and rats also seem to suffer from poor decisions due to an inability to let go of past “investments.” To test this, hungry mice and rats were individually placed in a “food court” with four windows, each serving food pellets of a different flavor. The clock started ticking, and the goal for each animal was to maximize food intake during an hourlong period. 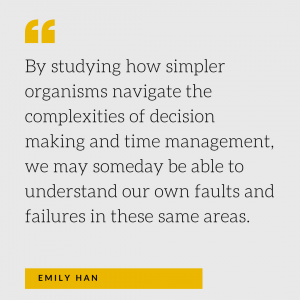 In this experimental food court, when an animal arrived at a window, a specific tone would sound, with each different tone indicating by pitch the wait time until food delivery. The wait time could be as short as one second, or as long as 30 seconds. The animal would decide after some deliberation to either walk away or start waiting by entering the “wait zone” — a designated area adjacent to the “order window” where the food would ultimately be dispensed. The animal was free to leave the wait zone at any time and go on to the next window, presumably if it decided that particular wait was too long. It turned out that the more time the animal had already spent in the wait zone, the less willing it was to quit — just like humans.

What really surprised the scientists was that the likelihood of an animal giving up did not relate to the time invested in the initial deliberation at the window, before it entered the wait zone. These results suggested that the time investment started to matter only when the animal officially started waiting, despite the fact that the initial deliberation between the four windows also ate away some of the one-hour time budget just the same. This discrepancy made the scientists very curious.

Could it mean that the animal uses two distinct types of decision mechanisms for these two parts of the task? The scientists speculated that during the deliberation time, the animal undergoes more careful and thorough evaluation of its options, drawing on its rich experiences from the past. For example, “This window asks me to wait a minute, but in the past, I’ve only waited 10 seconds on average — not worth it.” However, once it had committed to waiting, it stopped performing the cognitive-cost deliberation. Immediate experiences and internal states — such as hunger or mood—  started to occupy its mind, making the animal more prone to uneconomical fallacies.

How might the brain choose between the two decision mechanisms in different situations? Do these mechanisms interact when we make decisions? Are they impacted by mental illnesses or drug use? Can we tweak the brain circuits responsible for these mechanisms to improve decision making? Having an animal model for the sunk cost fallacy may enable scientists to better answer questions such as these, using a wide range of tools and experimental conditions. By studying how simpler organisms navigate the complexities of decision making and time management, we may someday be able to understand our own faults and failures in these same areas.

« The Organization of Student Representatives: A Student Government of Medical Education » The Universal Lab Language