NASA Social — The State of NASA at Goddard Spaceflight Center 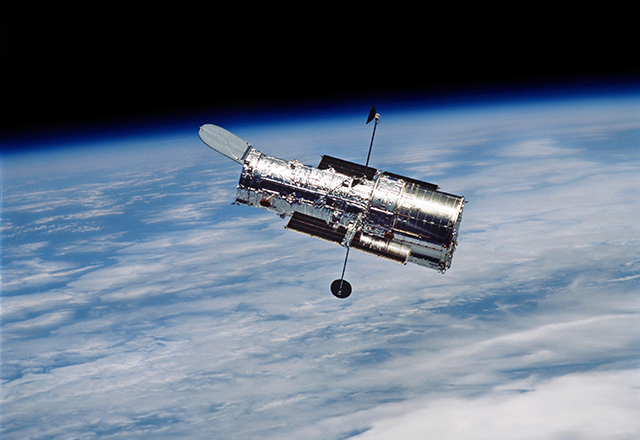 I recently attended a NASA social event at the Goddard Spaceflight Center, in Greenbelt, Maryland, to hear the State of NASA address by their administrator, Jim Bridenstine. In addition to hearing the address, I also got special behind-the-scenes insight into the fantastic work going on at Goddard. “NASA Socials,” formerly referred to as “NASA Tweetups,” are special, in-person events for people who agree to share their experience in a significant way and interact with NASA’s social media accounts. Because of Goddard’s proximity to Johns Hopkins Medicine, I jumped on the chance to attend this event and was lucky enough to be selected. To share my experience with the general public, I tweeted, posted Instagram stories, and created Facebook posts throughout the day. I strongly encourage anyone who is interested in doing the same to apply for the next available NASA Social because my experience was unforgettable.

The day began with a visit to the Astrobiology Analytical Lab, where scientists study meteorites to determine their chemical composition. Some of their samples are moon rocks from the ANGSA program, which stands for Apollo Next Gen Sample Analysis. The goal of this initiative is to maximize the information we reap from samples collected in older (Apollo 15, 16 and 17) missions in order to better inform upcoming lunar missions in the 2020s. I was amazed to hear that past Apollo missions had the forethought to save lunar samples for future generations to analyze, with the belief that superior technology would one day be developed. The Analytical Lab team grinds up these space materials into a fine powder and boils them — sort of like a “meteorite tea”— after which they can perform various spectroscopic techniques to determine the chemical composition of the samples. Similar experiments are occurring in another Goddard lab, called the MNGRL (MSCF Noble-Gas Research Laboratory). This laboratory is fondly referred to as the “Moon Girl Lab,” as — until recently — the staff comprised only women! Current projects in the Moon Girl Lab involve Argon dating, which can detect older samples than carbon dating can because the half-life of Argon is 1.3 billion years (much longer than that of carbon). This is necessary because the space samples being analyzed are billions of years old.

Next, we attended a demonstration that explained the current OSIRIS-REx mission. In this mission, a robotic spacecraft will attempt to collect samples from the asteroid Bennu and bring them back to Earth. Bennu was selected because it fit several criteria: the spacecraft could get there and back within the lifetime of the science team; it is larger than 25 meters in diameter and therefore spins slowly enough to touch down on; and it is a primitive, Class B asteroid, which allows the team to study the ancient material that led to the formation of the planets and perhaps even life itself. The primary sampling site, called “Nightingale,” is a safe spot for OSIRIS-REx to touch down on and has plenty of loose regolith to collect. Interestingly, 75% of the samples collected from the mission are also going to be saved for future generations, just as the Apollo samples were.

After learning about OSIRIS-REx, we ventured to the Hubble Space Telescope’s Control Center. This famous telescope is the size of a school bus and floats 340 miles above the Earth’s surface. Because it is outside of our atmosphere, it has 10 to 20 times the resolution of a telescope on Earth. Each day, commands are uploaded to the telescope for a full 24 hours. Employees at Goddard check the telemetry of the telescope; make sure everything is running smoothly; and upload commands. Another impressive command center we visited was the Network Integration Center, which manages critical data transmission before, during and after any NASA launch. The employees here actively listen to mission control, the near-Earth network (NEN), space network (SN) and deep space network (DSN). Nearly 98% of all NASA data flows through the Goddard Spaceflight Center.

In Goddard’s vast testing facility, there are myriad large chambers to simulate different aspects of the harsh space environment to ensure that their valuable equipment can survive the trip. Standing beneath the towering chambers was awe-inspiring. As one example of the details Goddard scientists need to consider, the facility has thermal vacuum chambers, where nearly all air is removed, so the pressure inside is 1 billionth of the atmospheric pressure on Earth — simulating the vacuum of space. The inner lining of the capsule can be heated up to simulate direct sun and/or UV light exposure or cooled down, using liquid nitrogen to near absolute zero. Additionally, they have a high-capacity centrifuge that can spin at up to 30 Gs, which simulates the extreme gravitational forces experienced during a rocket launch. Other, less obvious testing includes vibration testing to make sure nothing comes loose during launch, as well as sound testing, to determine if the enormous amounts of sound energy from a rocket launch might damage the equipment.

Finally, we got a glimpse into the High Bay Clean Room, where mind-blowing feats of human engineering occur. The James Webb Space Telescope was built here, and it is set to launch in 2021. The mirror on James Webb is 21 feet in diameter and is coated in golden-colored beryllium to prevent expansion and contraction in changing temperatures. The goal of this telescope is to detect extremely faint, infrared light, deep in the universe, which will allow us to see light from the very first stars that formed in our universe after the Big Bang. The telescope will travel one million miles away from Earth, after which it will take 30 days to unfold and deploy all of its equipment. Then, if all goes well, it will send back 6GB of data, twice a day. James Webb has a five- to -10-year lifespan, depending on how well all of the many intricate steps in the launch go. There is a docking ring built onto the telescope for possible future refueling, but right now, refueling is not a part of NASA’s plan.

Following the High Bay Clean Room, we visited the Robotic Operations Center, where we learned of a possible way to extend the short lifespans of objects we send into orbit. The Restore L mission aims to launch into space and repair satellites. Currently, only three satellites have ever been serviced while in orbit — Hubble, ISS, and Space Max. There are thousands of satellites currently in orbit, with more being sent up all the time, and humans cannot possibly service them all. This is a huge issue, considering that the top reason satellites die is simply because they run out of fuel, not due to any mechanical issue. Restore L is set to launch in 2023 as a first attempt at refueling these satellites to extend their use.

Overall, it is a very exciting time in the realm of space exploration. In his State of NASA Address, Administrator Jim Bridenstine noted that 2020 is first time NASA has had funding for human landing systems since the Apollo era. Excitingly, the first payloads to be delivered to the moon since 1972 are already scheduled to arrive next year. Additionally, the 2021 budget fully funds the new Space Launch System (SLS) and Orion Module, which will be taking us to the moon and, hopefully, beyond, in NASA’s new Artemis program. “We are the Artemis generation, and we are going,” said Bridenstine.

With that, I hope you are all inspired and invigorated, as you are part of an historic era of space travel and research! If any of this information has piqued your interest, you can get regular updates on many of NASA’s social media accounts, including but not limited to @NASA, @NASAMoon, @NASASun, @NASAHubble, @NASASpaceSciEdu, @NASASocial, @NASAGoddard @ISS_Research, @Space_Station, and @NASASTEM on Twitter and Facebook. Also, for more information on applying to attend a NASA Social, click here.