Put a Little LOVE in Your Art: Murals of Baltimore


Driving through Highlandtown along Eastern Avenue, I realize I’m rubbernecking again. And again. It’s a similar problem I have driving along Charles Street or Greenmount Avenue. Every block or so, there is another stunning mural, some less than one story tall, some many stories tall. Murals are ubiquitous in Baltimore, but my absolute favorite is the model of Fells Point in a bottle on the side of 417 South Broadway (pictured). Or the towering sunset-colored cow on the retention wall at Broadway and North Avenue. Actually, it’s the anaglyphic 3D portrait of a woman that looms over North Charles Street. Or maybe… 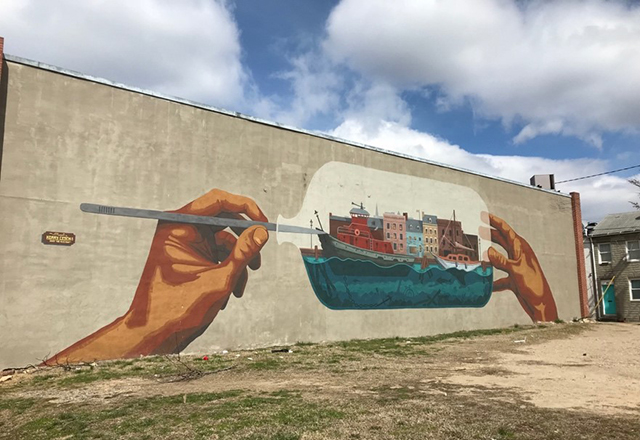 I had little opportunity to get to know Baltimore before I chose it for my home three years ago, and murals were one of the main ways I oriented myself as I went about exploring. “I’m back in the boat-in-a-bottle neighborhood,” I would note to myself as I wandered into Fells Point, or, “I’m on the ice cream mural side of the park,” as I perused Patterson Park (pictured). 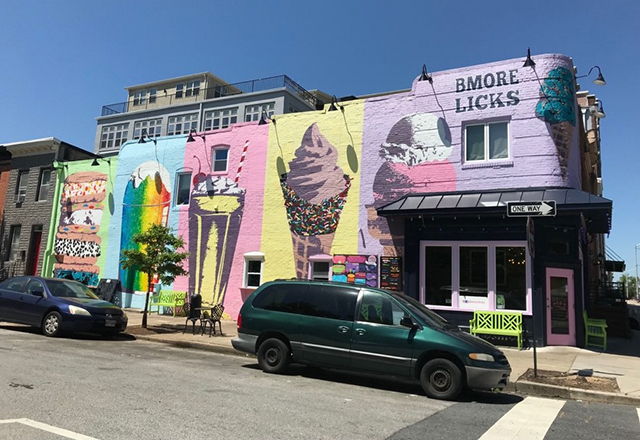 It was only recently that I started thinking critically about the messages of the murals. Even if I know nothing about a neighborhood, perusing the murals tells me a lot about the ambitions and values of its inhabitants. It’s sort-of like a Pictionary get-to-know-your-city walking tour. Some murals speak to aspirations, showing budding gardens and children playing. Some comment on the history and pride of the community with images of powerful figures such as Martin Luther King Jr. And some are more abstract, depicting surrealist juxtapositions or thematic symbols. It made me wonder: What are the avenues (pun intended) for creating these massive art pieces? Who chooses what goes where, and then how does it get there? 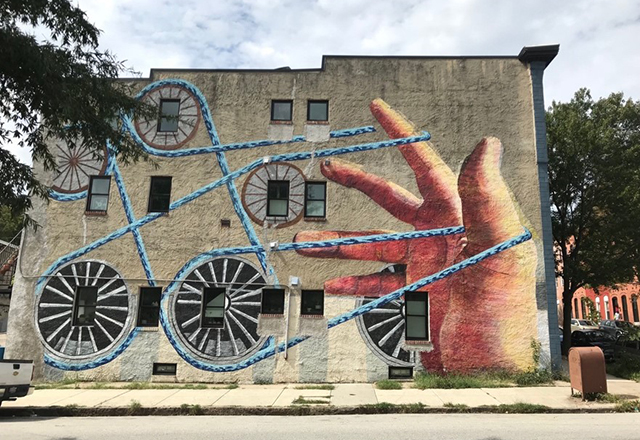 The Murals of Baltimore

In a city as chock full of public art as Baltimore, I suppose it is no surprise that these questions were not simple ones with only a single answer. And since I’m a graduate student, it should also come as no surprise that I spent perhaps too long researching where all the murals come from. For those who, like me, have come to love the ubiquitous murals, I have detailed some of their most prevalent sources.

The ephemeral art of Graffiti Alley (pictured) in Station North may not be a formal mural, but it is a great place to start for aspiring street artists. This L-shaped alley in Station North Arts and Entertainment District is the only place in the city where street artists can legally create their work without a permit. Since the alley is open to anyone with an itch to participate in street art, every brick is decorated with years of accumulated paint, and every visit is different as artists continuously paint and tag over older works. Graffiti Alley provides a candid cross-section-at-a-glance perspective of Baltimore and the casual talent and creativity it contains. 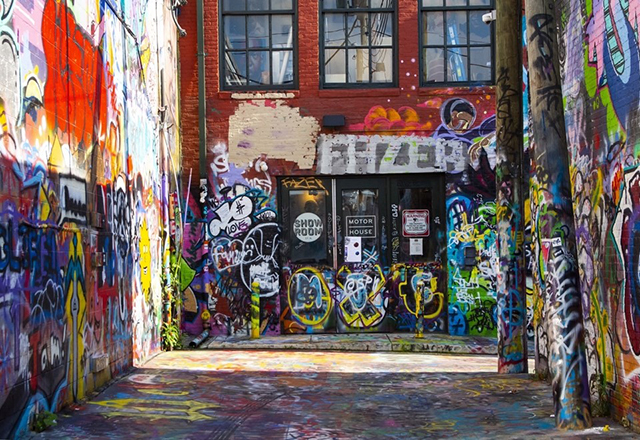 If you’ve ever passed a mural and experienced a shiver of déjà vu, this is likely the culprit. The Baltimore Love Project aims to install 20 murals that are identical save for color and size across diverse neighborhoods in Baltimore. The mural, which was designed and executed by Michael Owen, depicts four hands that spell out the word “LOVE.” Owen says that hands personify action and suggest the incorporation of a human without specifying who that human is. These murals remind the communities in which they reside of the human, actionable component of love, and the four coordinated hands depict how love is not something we can do on our own. As with other mural projects, it is often individuals or communities that help fund the LOVE murals. Unfortunately, I don’t recommend using these murals as landmarks, since their recurrence around the city might get you turned around (based on personal experience). 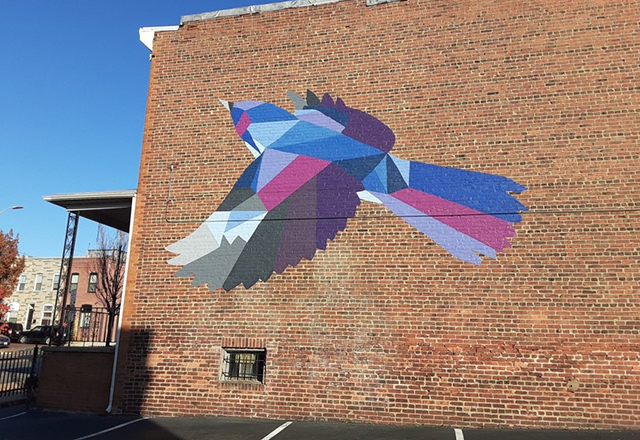 The Wall of Pride at Carey and Cumberland streets by local artist Pontella Mason celebrates the lives of dozens of African American freedom fighters and cultural drivers such as Malcolm X, Sojourner Truth, Harriet Tubman and Langston Hughes. It is one of over 250 murals that have been organized by the most widespread public art program in Baltimore, the Baltimore Mural Program, since its inception in 1975. The Baltimore Office of Promotion and the Arts coordinates and directs the program by working with the artists, neighborhood groups and funding sources with the primary goals of making neighborhoods more attractive, instilling a sense of pride, providing employment for local artists, combatting graffiti and engaging young people in the beautification of their own communities.

The theme of each mural is chosen by the community and must depict something of importance for the neighborhood, and this is where the creativity and diversity of the murals stem from. During my walks, I’ve found that Butcher’s Hill expresses its personality in a trompe l’oeil scene from a play, whereas Greenmount West articulates itself in a more abstract depiction of the constellation Leo (pictured). The Baltimore Mural Program works with the community to organize funding sources, puts communities in connection with interested artists, and helps facilitate the integration of the artist’s style with the community’s vision of the mural. Each mural is a huge undertaking — it generally takes between two weeks and two months to paint, depending on the size, complexity and weather — and costs between $6,000 and $20,000, all of which comes from donations. All new murals are treated with an anti-graffiti coating to protect against vandals and the elements, and then the completion of the monumental project is celebrated with a dedication ceremony customized to the community and the mural. 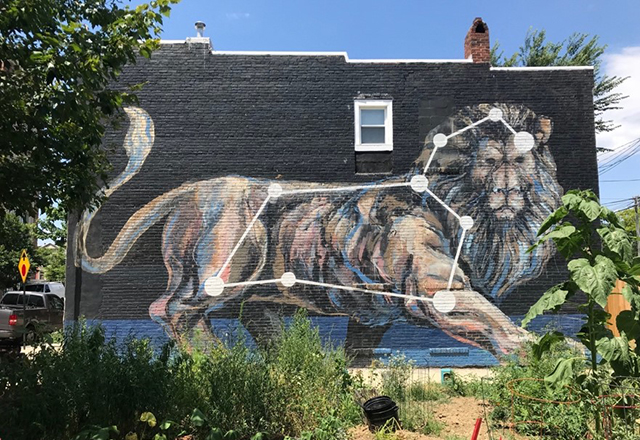 Open Walls Baltimore is an outdoor gallery containing 34 murals created in two stages during 2012 and 2014. The project welcomed national and international artists to beautify the neighborhood of Station North and was curated by local street artist Gaia. The neighborhood is home to many artists due to its proximity to Maryland Institute College of Art, and this extensive, highly visible endeavor opened a forum for discussion about public art in the artists’ own backyard. Mural unveilings included events such as performance installations and open-air parties, bringing the beautification of the community to life. Now the entire neighborhood is an outdoor art gallery, available to anyone with sturdy walking shoes and good weather.