Art As Applied to Medicine: the 2019 Graduate Showcase 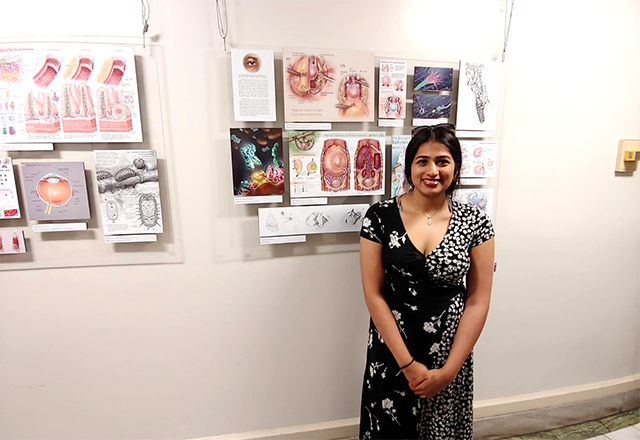 Johns Hopkins is renowned for its highly regarded medical school and graduate programs, and every May our halls are inundated with freshly minted M.D. and Ph.D. graduates ready to be leaders in their fields. However, several programs at Johns Hopkins deserve more recognition and none more so than the Master of Arts program in medical and biological illustration.

Johns Hopkins has a long history in medical illustration stretching back to the late 1890s, when Max Brödel was invited to Johns Hopkins to illustrate for Harvey Cushing, William Halsted, Howard Kelly and other prominent clinicians. Brödel was a gifted artist who graduated from the Academy of Fine Arts Leipzig, and during his postgraduate training with Carl Ludwig he acquired a basic knowledge and appreciation of medicine. In 1911, Brödel oversaw the development of the Department of Art as Applied to Medicine at Johns Hopkins with an endowment from Henry Walters. Brödel’s purpose in creating this department was “to bridge over the gap existing between art and medicine, and to train a new generation of artists to illustrate medical journals and books in the future.”1 This department was the first of its kind, and its medical and biological illustration (MBI) Master of Arts program is still one of only four in North America.

Brödel’s legacy lives on through the MBI students, and every May the art as applied to medicine department hosts a showcase to celebrate the accomplishments of its recent graduates. It is fitting that front and center at the 2019 showcase were six beautifully detailed renderings of human hipbones painstakingly created by the students using a carbon dust technique created by Brödel. These carbon dust hipbones are one of the first projects the students complete during the 22-month program, and they go on to learn how to produce illustrations, animations and 3D models. From illustrations of the racket-tipped feathers of the blue-crowned motmot (by Vondel Mahon) to interactive models of in vitro fertilization (by Cecelia Johnson), this showcase had something for everyone!

The illustrations were as diverse as the students themselves. Several students joined the MBI program immediately after earning their undergraduate degrees, such as Alisa Brandt, who studied biology and natural history at McGill University before discovering the field of medical illustration. Another student in the program, Insil Choi, studied animation at the Kaywon School of Art and Design and worked as a junior designer at two different Korean animation companies before turning her sights to medical illustration. 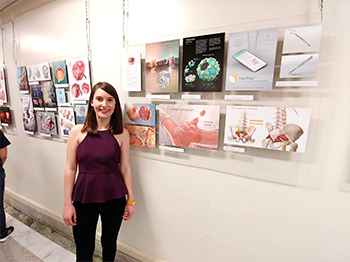 Brittany Bennett came to the program with a fine arts background and immediately knew her favorite part of the MBI program was learning 3D modeling. “When you’re drawing you can put together a bowl of fruit and make a still life, but with 3D modeling you can create a whole world!” She also warned that “this program is not for the faint of heart,” because it is very fast paced. Fortunately, all that hard work pays off for MBI students. The graduates from the past four years had an employment rate of 95% within the first six months of completing the MBI program. Brittany was excited to share that she had just accepted a job with a medical illustration studio at the University of Pennsylvania. 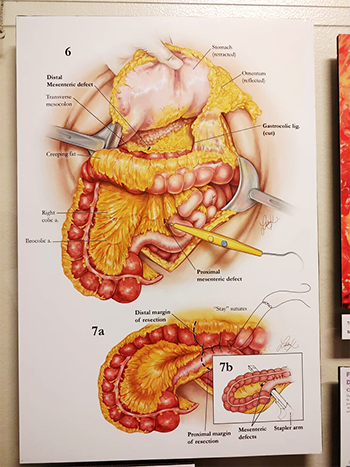 While some students in the MBI program first discovered the field of medical illustration in college, Lohitha Kethu knew in high school that it was the perfect profession to merge her interest in biology and appreciation of medicine. Lohitha has a Bachelor of Fine Arts degree in scientific and preparatory medical illustration from Virginia Commonwealth University School of the Arts, and even with that strong foundation, she thought a strength of the MBI program was the amazing faculty. “You learn so much from them, and they work together so well.” Lohitha is starting a medical illustration job soon at the Journal of the American Medical Association. 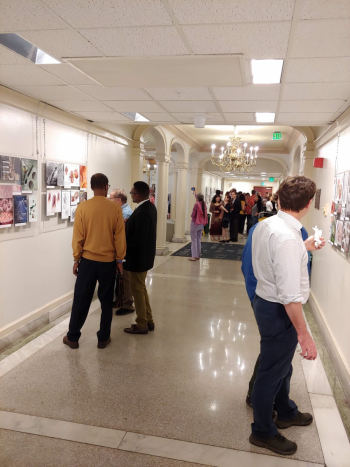 Gary Lees, former chair of the art as applied to medicine department, perfectly summarizes the goal of medical illustration: “Medical illustration is not drawing a pretty picture. It’s not just knowing the science. It’s being able to take science and the art and combine them to communicate.”1 It was clear from the work presented at the 2019 showcase that the six MBI graduates have learned how to merge scientific communication with beautiful illustration, and are fully prepared to flourish in the field of medical illustration.

1 thought on “Art As Applied to Medicine: the 2019 Graduate Showcase”